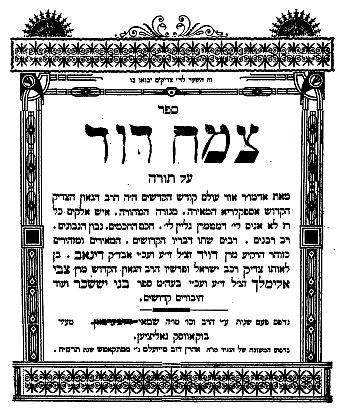 In 5700/1940, the Arab restriction of the sale of land to Jews in Eretz Yisrael took effect.

The Bnei Yissaschar named his son after the famous Reb Dovid of Lizhensk, a devoted Chassid of the Rebbe Reb Elimelech. When he was sick at one time, his father added the letter yud to his name (Dovid is spelled with a yud at times in Nach), basing this segulah on the Gemara (Brachos 5b) that relates that when Rabi Chiya bar Abba was sick, Rabi Yochanan came and gave him “yudo,” his hand, and he became well.

Following the petirah of his father in 5601/1841, Reb Dovid was appointed Rebbe in Dinov.

He was known as a kadosh and a poel yeshuos. Many Chassidim flocked to him for his sage advice and brachos.

Reb Dovid was close with many of the generation’s Rebbes, most notably the Divrei Chaim of Sanz and the Sar Shalom of Belz, who later became his mechutan. Reb Dovid would also travel to Harav Yisrael of Ruzhin.

About a year before his petirah, Reb Dovid was greatly weakened.

The Shabbos before Reb Dovid was niftar, Harav Moshe of Rozvadov sang Eishes Chayil at his tisch to a Dinover niggun, explaining he was trying to bring a yeshuah for Reb Dovid through this, but the decree was sealed.

His sons were Harav Yeshayahu Naftali Hertz, mechaber of Hanosen Imrei Shefer, who succeeded his father in Dinov; Harav Tzvi Elimelech, the Tzvi Latzaddik of Bluzhev; and Harav Meir Yehudah, the Ohr Lameir of Bukovsk.

Reb Dovid’s divrei Torah were compiled in the sefer Tzemach Dovid on the Torah.

In 1864, President Abraham Lincoln assigned Ulysses S. Grant, who had just received his commission as lieutenant-general, to the command of the Armies of the United States.