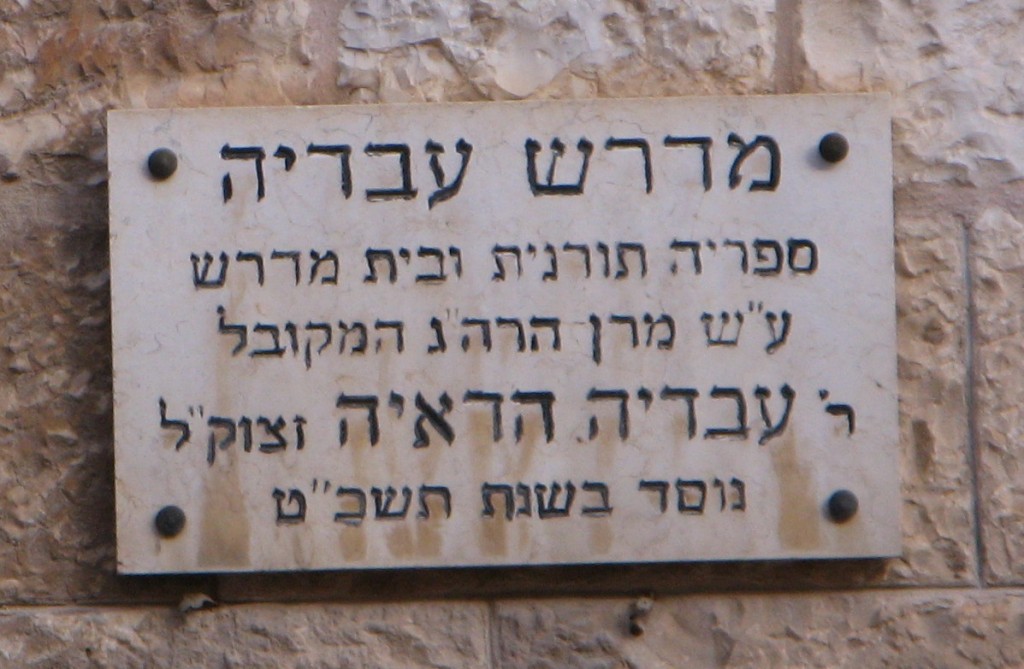 Harav Ovadyah Hadayah was born in Teves 5650/1890, in Aleppo, Syria. His father, Harav Shalom, was a descendant of a famed family of Rabbanim of Aleppo.

Together with his parents, he moved to Eretz Yisrael and settled in Yerushalayim. He learned in Talmud Torah Doresh Tzion and later in Yeshivas Chessed L’Avraham and Tiferes Yerushalayim.

Rav Ovadyah was regarded as a bachur who was destined to become a leader of Klal Yisrael. He was especially known for his phenomenal memory, not forgetting anything he learned.

Rav Ovadyah was Rosh Yeshivah of Yeshivat Beit El, for the learning of Kabbalah, for 30 years.

Rav Ovadyah is most famous for his eight-volume She’eilos U’teshuvos Yaskil Avdi in which his greatness as well as his clarity in Torah and halachah are evident. Seven volumes were published in his lifetime, while the last volume was published posthumously.

Rav Ovadyah was niftar on the afternoon of Shabbos Parashas Yisro, 20 Shevat 5729/1929, while learning at home, after having received the aliyah of the Aseres Hadibros. His life ended while holding a sefer.

In 1606, Guy Fawkes, convicted of treason for his part in the “Gunpowder Plot” against the English Parliament and King James I, was executed.

In 1865, Gen. Robert E. Lee was named general-in-chief of all the Confederate armies.

In 1917, during World War I, Germany served notice it was beginning a policy of unrestricted submarine warfare.

In 1929, revolutionary Leon Trotsky and his family were expelled from the Soviet Union.

In 1944, during World War II, U.S. forces began a successful invasion of Kwajalein Atoll and other parts of the Japanese-held Marshall Islands.

In 1950, President Harry S. Truman announced he had ordered development of the hydrogen bomb.

In 1958, the United States entered the Space Age with its first successful launch of a satellite into orbit, Explorer I.

In 1961, NASA launched Ham the Chimp aboard a Mercury-Redstone rocket from Cape Canaveral; Ham was recovered safely from the Atlantic Ocean following his 16½-minute suborbital flight.

In 1971, astronauts Alan Shepard, Edgar Mitchell and Stuart Roosa blasted off aboard Apollo 14 on a mission to the moon.