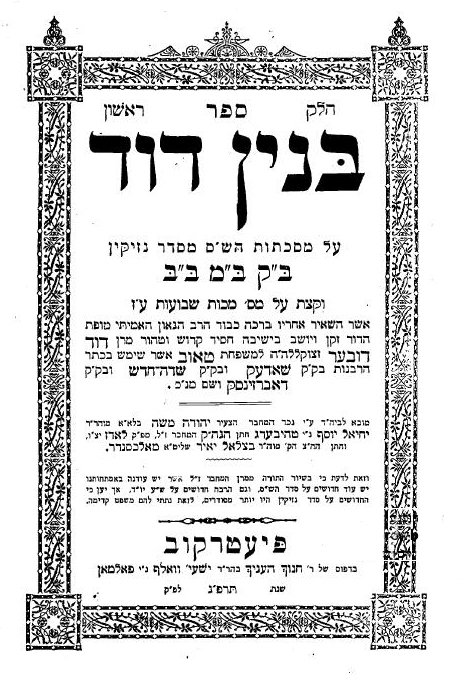 Today is a Yom Tov cited in Megillas Taanis, commemorating the removal of the Romans, who instituted burdensome taxes on the Jews.

In 1656/2105 B.C.E. (according to Rabi Eliezer), Noach opened the window of the teivah and dispatched the dove. “But the dove found no resting place for the sole of its foot” and returned to the ark.

When he was still a young boy, he became known for his dedication to learning and his yiras Shamayim.

It is told that when he was just nine years old, Harav Yitzchak of Vorka paid a visit to Zaloshin. The young Dovid, wishing to see the Rebbe’s holy countenance during the davening (the Vorka Rebbe would cover his head with his tallis), crawled under the table and peeked up through the tallis to see the Rebbe’s face. He related that he also saw the Rebbe’s limbs knocking against each other, in awe of Hashem.

Unwilling to be supported for learning Torah, he first tried his hand at business. But seemingly it wasn’t meant to be; he was asked to serve on the beis din in Zaloshin, as the city was short one of the three Dayanim required for a beis din.

In 5635/1875, Reb Dovid Dov was appointed as Rav in the city of Dabrizinsk, on the border between Poland and Germany. There, too, he founded a yeshivah, which attracted many bachurim.

Chiddushei Torah of Reb Dovid Dov on many masechtos of Shas and Shulchan Aruch were published as Binyan Dovid. Many of his manuscripts were burned, however, which greatly distressed Reb Dovid Dov.

In 1807, former Vice President Aaron Burr was found not guilty of treason. (Burr was then tried on a misdemeanor charge, but was again acquitted.)

In 1905, Alberta and Saskatchewan entered Confederation as the eighth and ninth provinces of Canada.

In 1945, Americans received word of Japan’s formal surrender that ended World War II. (Because of the time difference, it was September 2 in Tokyo Bay, where the ceremony took place.)

In 1985, a U.S.-French expedition located the wreckage of the Titanic on the floor of the Atlantic Ocean roughly 400 miles off Newfoundland.