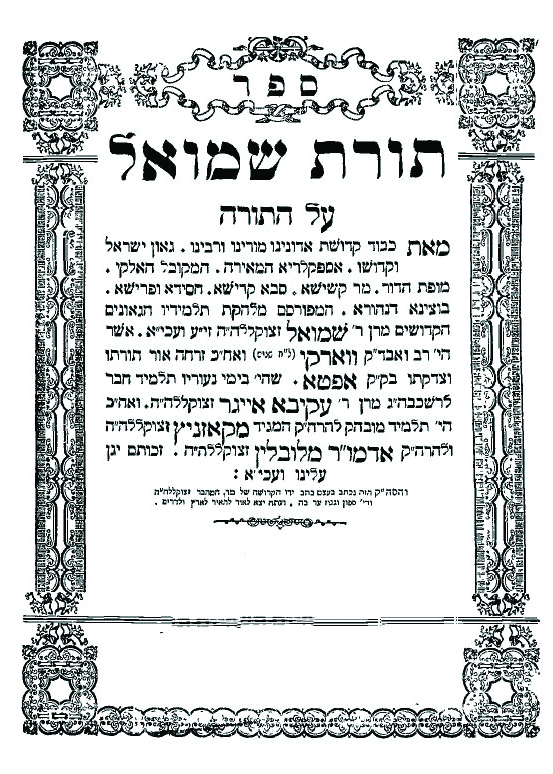 The Ner Maaravi (Western Lamp) of the Menorah in the Beis Hamikdash was extinguished during the reign of King Achaz (Shulchan Aruch Orach Chaim 580:2). According to others, the date is tomorrow, 18 Av. A taanis tzaddikim on both days commemorates the event (see Mishnah Berurah).

In 5649/1889, 120 Jewish families arrived in Buenos Aires, establishing the Jewish community there.

Born in 5514/1756, Harav Shmuel Eibschutz was the son of Harav Naftali Hertz, related to Harav Yonasan Eibschutz, and a descendant of the Megaleh Amukos.

Reb Shmuel learned under Harav Akiva Eiger for a number of years.

After settling in Vorka, he was attracted to the ways of Chassidus and traveled to the court of the Maggid of Kozhnitz. As was customary among Chassidim, they didn’t wear woolen clothes due to the suspicion that they contained shaatnez, an issur d’Oraisa. Reb Shmuel, who came from a non-Chassidic background, wore woolen clothing, but upon joining the Chassidim, he changed to silken garments.

Later, in Posen, he met Harav Akiva Eiger, who asked him why he wore silk and not wool. Reb Shmuel explained the opinion of the Chassidim. At once, Harav Akiva Eiger ripped off his woolen garment, exclaiming that he was shocked that he hadn’t thought of this issue himself. It is related that Rav Akiva Eiger waited there until he was brought new garments free of any halachic issues.

Reb Shmuel also went to the court of the Chozeh.

His sons were Harav Berish, Rav in Zelichov; Harav Ephraim, Rav in Piaseczna and Sulifa; Harav Mordechai; and Harav Simchah. Among his famous talmidim were Harav Yissachar Ber of Radoshitz and Harav Yaakov Aryeh of Radzimin, who grew up in Reb Shmuel’s home.

From the many manuscripts of his chiddushim, only the one on Torah was published, under the name Toras Shmuel. His chiddushim on Shas were never published, except those on the sugya of Kavsah in Maseches Shabbos, which were printed at the back of Toras Shmuel. The sefer was highly regarded by many of the generation’s Gedolim and received many glowing haskamos.

In 1862, Martin Van Buren, the eighth president of the United States and the first to have been born a U.S. citizen, died at age 79 in Kinderhook, N.Y., the town where he was born in 1782.

In 1866, Tennessee became the first state to be readmitted to the Union after the Civil War.

In 1923, the Treaty of Lausanne, which settled the boundaries of modern Turkey, was concluded in Switzerland.

In 1952, President Harry S. Truman announced a settlement in a 53-day steel strike.

In 1969, the Apollo 11 astronauts — two of whom had been the first men to set foot on the moon — splashed down safely in the Pacific.

In 1974, the Supreme Court unanimously ruled that President Richard Nixon had to turn over subpoenaed White House tape recordings to the Watergate special prosecutor.

In 1998, a gunman burst into the U.S. Capitol, killing two police officers before being shot and captured. (The shooter, Russell Eugene Weston Jr., is being held in a federal mental facility.)

In 2002, nine coal miners became trapped in a flooded tunnel of the Quecreek Mine in western Pennsylvania; the story ended happily 77 hours later with the rescue of all nine.