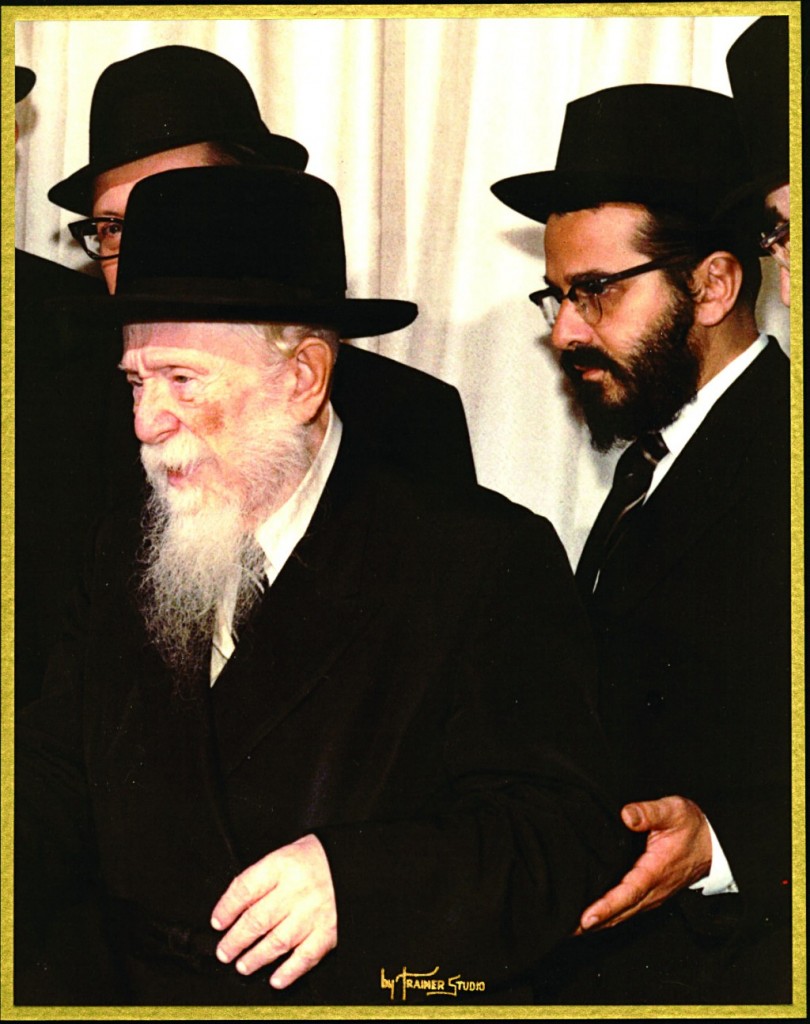 In 2449/1312 B.C.E., the egel (golden calf) was formed by the erev rav. Assuming that Moshe Rabbeinu would not return, they turned to Chur, the son of Kalev and Miriam, and asked him to make an idol. When he did not agree, he was killed. Aharon Hakohen, realizing that he would share a similar fate, attempted to delay them, albeit in vain.

2449/1312, B.C.E., Chur, son of Kalev ben Yefuneh and Miriam Haneviah, who was killed by the erev rav for his protest against making the egel

Harav Avraham Yehoshua Heschel was born in Husyatin on 4 Iyar 5648/1888. His father was Harav Yitzchak Meir, the Rebbe of Kopycznitz. He spent his early childhood with his illustrious maternal grandfather, Harav Mordechai Shraga, the Rebbe of Husyatin, son of the Ruzhiner Rebbe. When Harav Avraham Yehoshua was six years old his grandfather was niftar, and his father became Rebbe in the nearby town of Kopycznitz.

Harav Avraham Yehoshua traveled often to his great-uncle, Harav David Moshe of Chortkov, who showed him great affection. (The Chortkover Rebbe was also his step-grandfather, as he had married the mother of Harav Yitzchak Meir.)

Harav Avraham Yehoshua’s greatness shone in every area: in his refinement, in his sharp mind, in his extreme diligence in Torah study, and especially in his extraordinary deeds of tzedakah and chessed and his mesirus nefesh for others.

With the outbreak of World War I, Harav Avraham Yehoshua moved with his father and his own young family to Vienna. There, during those troubled times, his massive deeds of chessed reached their peak. His home became a center for the thousands of refugees who fled to Vienna. They found in Harav Avrumenyu — as he was fondly known — a listening ear and a fount of practical advice and assistance.

The war left a great many orphans in its wake, with no religious Jewish orphanage to receive them. Harav Avrumenyu made them his highest priority and established a large orphanage in Baden, near Vienna.

Harav Avraham Yehoshua was his father’s right hand throughout his life. Upon his father’s petirah, on the first day of Rosh Hashanah 5696/1935, he succeeded his father as Kopycznitzer Rebbe.

In 5698/1938, when the Nazis entered Vienna, the first ones to experience their cruelty were the Rabbanim. Like the rest, the Kopycznitzer Rebbe was arrested and forced to do degrading labor. The Nazis made a point of cutting off the beards of distinguished Rabbanim, but this the Kopycznitzer managed to avoid. When his turn came, he stuck out his hand and said to the Nazi officer, “Cut off these two fingers, but don’t touch my beard!” The Nazis were so taken aback by the Rebbe’s courage that they left him alone.

On the advice of his uncle, Harav Yisrael, the Husyatiner Rebbe (who was then already living in Eretz Yisrael), he moved to America where he settled on the Lower East Side of New York City. As always, he set out immediately to help others, never turning down a request from an institution or an individual. His tzedakah and chessed provided significant aid to the recipients, and he did it all with profound respect.

On 15 Tammuz, 5727/1967, the Rebbe planned a trip from his home in Boro Park to Monsey. Taking leave of his aron kodesh and mezuzos and reminding his children to take along a copy of the Ramban’s Shaar Ha’gemul, he set out. That night in Monsey, on 16 Tammuz, he returned his holy soul to its Maker.

Upon his request, the Rebbe was buried in Teveria, near the grave of his uncle, Harav Yisrael of Husyatin.

He was succeeded by his son, Harav Moshe Mordechai of Kopycznitz, zt”l.

In 1314, the forces of Scotland’s King Robert I defeated the English in the Battle of Bannockburn.

In 1509, Henry VIII was crowned king of England; his wife, Catherine of Aragon, was crowned queen consort.

In 1793, the first republican constitution in France was adopted.

In 1940, France signed an armistice with Italy during World War II.

In 1948, Communist forces cut off all land and water routes between West Germany and West Berlin, prompting the western allies to organize the Berlin Airlift.

In 1968, “Resurrection City,” a shantytown constructed as part of the Poor People’s March on Washington D.C., was closed down by authorities.

In 1973, President Richard Nixon concluded his summit with the visiting leader of the Soviet Union, Leonid Brezhnev, who hailed the talks in an address on American media.

In 1982, a British Airways Boeing 747 lost power in all four engines while passing through volcanic ash generated by Mount Galunggung in Indonesia. The crew managed to restart the engines and make a safe emergency landing in Jakarta.

In 1983, the space shuttle Challenger — carrying America’s first woman in space, Sally K. Ride — coasted to a safe landing at Edwards Air Force Base in California.

In 1993, David Gelernter, a Yale University computer scientist, was seriously injured by a mail bomb sent from the Unabomber, Theodore Kaczynski.