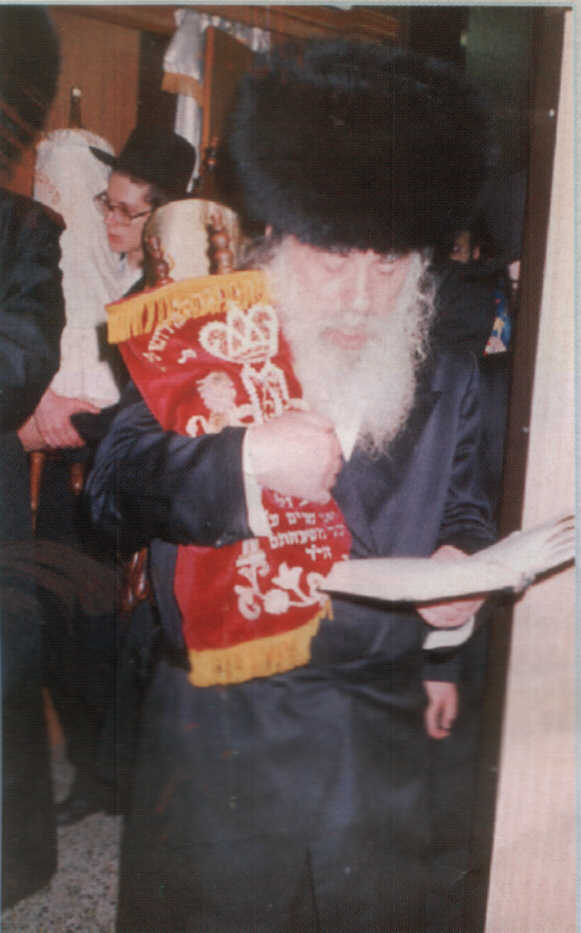 Harav Avraham was born 11 Shevat 5677/1917, in Kinov, in the Ostrovtze region of Poland. His father was Harav Yaakov Yitzchak Dan, Hy”d, son of Harav Elimelech Menachem Mendel of Strikov, zt”l. Reb Avraham, as he was called, was a child prodigy who studied under leading Polish talmidei chachamim.

After becoming bar mitzvah, he entered Yeshivas Chachmei Lublin and was a prime talmid of Harav Meir Shapiro, the Kaziglover Rav and Harav Shimon of Zelichov. There he grew in Torah, avodah and middos.

In Kislev 5700/1940, obeying his father’s orders, Reb Avraham fled Warsaw for Vilna. Of all his family, only he and a sister survived the war, while their parents and eight of their siblings perished, Hy”d. He eventually arrived in Eretz Yisrael and settled in Yerushalayim. He used to say that everything in Eichah about the slaughter and suffering of Yidden happened  in World War II.

In Yerushalayim, he grew close to and became a faithful talmid of the Brisker Rav, Harav Yitzchak Zev Soloveitchik, zt”l.

After his marriage to the daughter of Harav Meir Wydislavski, he found an apartment near that of the Tchebiner Rav, to whom he was also close.

It took many years for Reb Avraham to recover sufficiently from his losses in World War II to be able to undertake the rebuilding of Strikover Chassidus. When the time came, he moved to Tel Aviv and built a beis medrash, but did not establish a court. Instead, he founded an elite kollel.

In 5744/1984 he moved to Bnei Brak, where he re-established his beis medrash and founded Yeshivas Strikov. He was sought after by talmidei chachamim as well as by suffering, downtrodden Yidden, all of whom valued his erudite learning, his sage advice and his welcoming, listening ear.

Reb Avraham was one of the rare Gedolim acclaimed equally by the world of Chassidus and the Litvishe yeshivah world. For two generations he was revered as one of the illustrious disseminators of Brisker Torah, while leading chassidim respected him as a brilliant scion of the Strikov dynasty.

The Strikover Rebbe’s humility was extraordinary; he simply could not bear any kavod at all. He never had a meshamesh — he opened his front door himself and answered his own telephone. For most of his life, he wore a regular suit instead of the usual rabbinical garb (kapota). He would even remove his rabbinical hat in public places so as not to stand out.

When he moved to Bnei Brak, he would often be seen helping children cross the street.

For dozens of years he traveled by bus, refusing to allow anyone to drive him. Even in his later years, he would insist on taking the bus from Bnei Brak to Yerushalayim. When a chassid objected that buses were not respectable enough, the Rebbe rejoined with humor that, measuring by the size of his vehicle (a bus), he must be the greatest Rebbe around.

In 1485, England’s King Richard III was killed in the Battle of Bosworth Field, effectively ending the War of the Roses.

In 1846, Gen. Stephen W. Kearny proclaimed all of New Mexico a territory of the U.S.

In 1862, President Abraham Lincoln responded to Horace Greeley’s call for more drastic steps to abolish slavery; Lincoln replied that his priority was saving the Union, but he also repeated his personal wish “that all men everywhere could be free.”

In 1922, Irish revolutionary Michael Collins was shot to death, apparently by Irish Republican Army members opposed to the Anglo-Irish Treaty that Collins had co-signed.

In 1956, President Dwight D. Eisenhower and Vice President Richard Nixon were nominated for second terms in office by the Republican National Convention in San Francisco.

In 1962, French President Charles de Gaulle survived an attempt on his life in Paris.

In 1972, a hostage drama began at a Chase Manhattan Bank branch in Brooklyn, N.Y., as John Wojtowicz and Salvatore Naturile seized seven employees during a botched robbery; the siege ended with Wojtowicz’s arrest and Naturile’s killing by the FBI.

In 1989, Black Panthers co-founder Huey P. Newton was shot to death in Oakland, Calif. Gunman Tyrone Robinson was later sentenced to 32 years to life in prison.