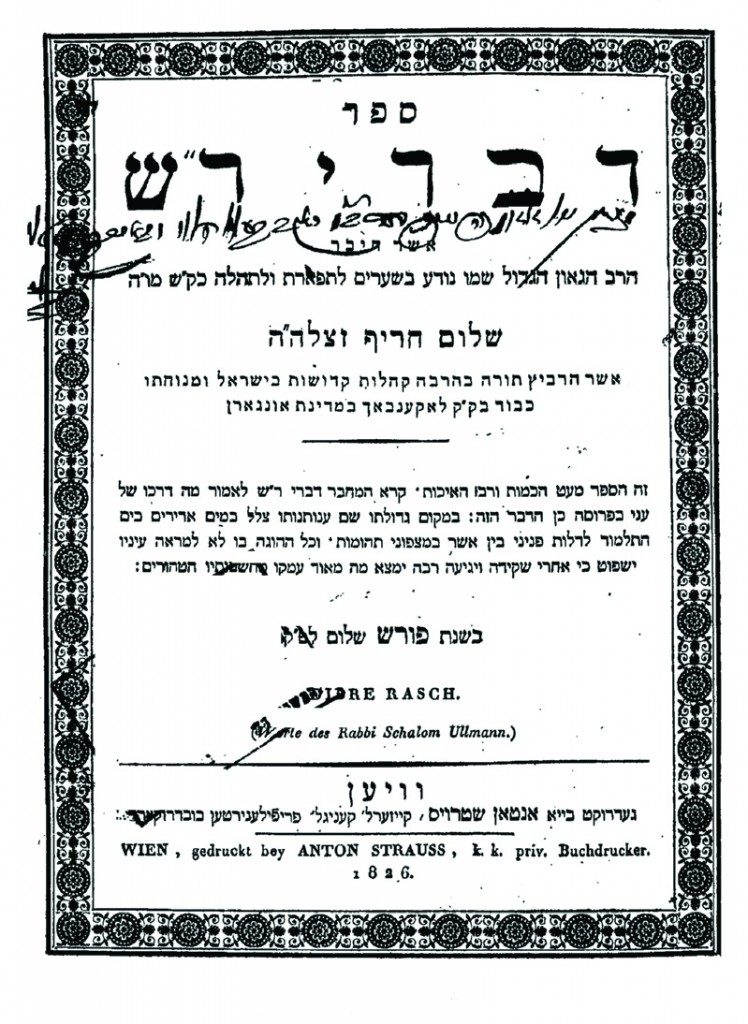 In 4178/418 C.E., a decree to exclude Jews from public office in the Roman Empire went into effect.

Harav Shalom Ullmann was born in Fürth on 16 Adar 5515/1755. His father, Harav Yisrael Isser, was the mechutan of Harav Yosef Steinhart, Rav of Fürth.

He corresponded with some of the generation’s leading Gedolim, among them Harav Aryeh Leib Ginzburg, the Shaagas Aryeh.

Reb Shalom married the daughter of Harav Refael Reiss, Rav of Endingen in Switzerland. In 5544/1784, he was appointed Rav of Ansbach, and in 5552/1792, Rav of Stampfen; he became Rav of Nad-Attad in 5559/1799, and 10 years later, in 5569/1809, Rav of Lakenbach. Harav Mordechai Bannet, Rav of Nikolsburg, would send many of his excellent talmidim to learn under Reb Shalom in Lakenbach.

Famed in the Torah world for his sharp mind and thorough knowledge of both nigleh and nistar, Reb Shalom was aptly called Reb Shalom Charif.

Reb Shalom wrote many sefarim, but only his Divrei Rosh on the Torah and Shas was published.

Towards the end of his life, Reb Shalom said that he knew when he was going to be niftar. In his later years he barely spoke at all.

Four weeks before his petirah, in a letter to his son, Reb Shalom signed off saying that he was writing briefly, as he was preparing for his judgment. On 16 Adar 5585/1825, 70 years to the day since he was born, Reb Shalom was niftar.

In 1913, the 16th Amendment to the U.S. Constitution, giving Congress the power to levy and collect income taxes, was declared in effect by Secretary of State Philander Chase Knox.

In 1991, during the Persian Gulf War, 28 Americans were killed when an Iraqi Scud missile hit a U.S. barracks in Dhahran, Saudi Arabia.