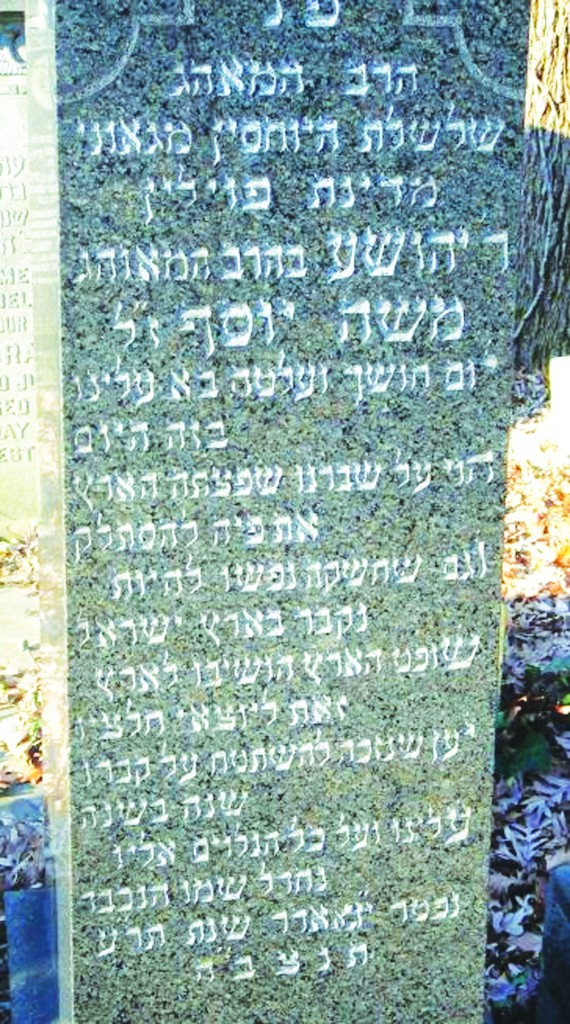 Harav Yehoshua Siegel was born on 22 Av, 5606/1846, in Kuczborg, Poland. His father, Harav Moshe Yosef, and his grandfather were both prestigious Rabbanim.

The young Yehoshua was renowned for his brilliant mind. He received semichah from Harav Leibel Charif of Plotzk, Harav Yehoshua of Kutna and Harav Yosef Chaim Kara of Vlatzlovak.

Over the years, Rav Siegel served as Rav in several congregations on the Lower East Side: the Sierpcer Chevrah, followed by Chevrah Chochmas Odom mi-Plonsk on 61 Hester Street. In 5648/1888, he became the Rav of Chevrah Tehillim Anshei Viscover (Clinton Street Synagogue), a position he held for over 12 years until his petirah.

In the summer of 5668/1908, Rav Siegel went to Eretz Yisrael to arrange for the printing of his sefarim and to visit his longtime friend Harav Shmuel Salant, Rav of Yerushalayim.

Information for this article was culled from research by Baruch Amsel on Gedolim and Tzaddikim who are buried in America.

Directions to kever (Not recommended for cars):

In 1784, a U.S. merchant ship, the Empress of China, left New York for the Far East to trade goods with China.

In 1865, Tennessee amended its constitution to abolish slavery.

In 1935, it became illegal for airplanes to fly over the White House.

In 1996, the space shuttle Columbia blasted into orbit on a mission to unreel a satellite on the end of a 12.8-mile tether. (The cord broke just before being extended to its full length.)