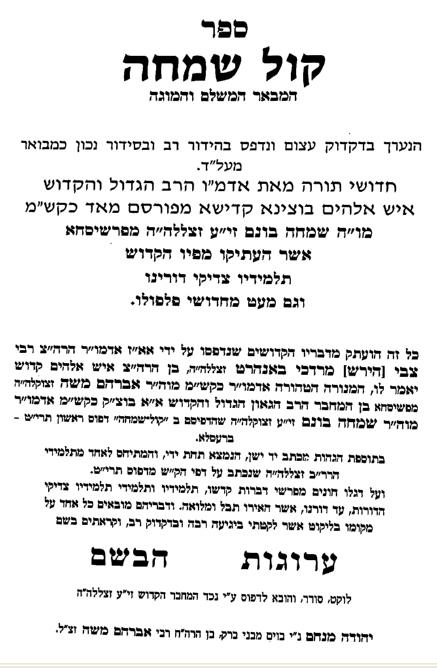 Harav Simchah Bunim was born in 5525/1765 in the city of Voidislav. His father, Harav Tzvi Hirsch, known as the Maggid of Voidislav, wrote several sefarim, including Asarah L’meah and Eretz Tzvi. His mother, Rebbetzin Sarah, was the daughter of Harav Betzalel of Zolkova, mechaber of B’shem Betzalel on Pirkei Avos. Reb Bunim was born into a non-Chassidic family. In fact, it was against his father’s advice that he became attached to Chassidus.

He learned in the yeshivos of Harav Yirmiyahu of Mattersdorf in Austria, and of Harav Mordechai Bennet of Nikolsburg. After returning to Poland, he was drawn by Reb Moshe Leib Sassover, zy”a, (along with his Rebbe, the Yehudi Hakadosh) to Chassidus. He traveled to the Chozeh of Lublin, becoming one of his closest Chassidim. When the Yehudi Hakadosh moved to Peshischa and established his own court, Reb Simchah Bunim went with him, returning to his hometown.

After the Yehudi Hakadosh was niftar on 19 Tishrei 5574/1813, a contingent of his Chassidim came and asked Reb Simchah Bunim, his senior talmid, to become the next Rebbe in Peshischa.

Under Reb Simchah Bunim, the Chassidus of Peshischa blossomed. He attracted many of Poland’s major talmidei chachamim; he himself gave a daily shiur in Gemara and halachah to the leading lamdanim among his Chassidim.

Before his petirah, his Rebbetzin was crying. “Why are you crying?” he asked her. “All my life I tried to learn how to die, and now that it is finally coming, is this the time to cry?”

He was niftar on 12 Elul in Peshischa, and was buried there in the ohel of his Rebbe, the Yehudi Hakadosh. After his petirah his son Reb Avraham Moshe was appointed Rebbe in Peshischa.

In 1928, the Kellogg-Briand Pact was signed in Paris, outlawing war and providing for the peaceful settlement of disputes.

In 1939, the first turbojet-powered aircraft, the Heinkel He 178, went on its first full-fledged test flight over Germany.

In 1962, the United States launched the Mariner 2 space probe, which flew past Venus in December 1962.