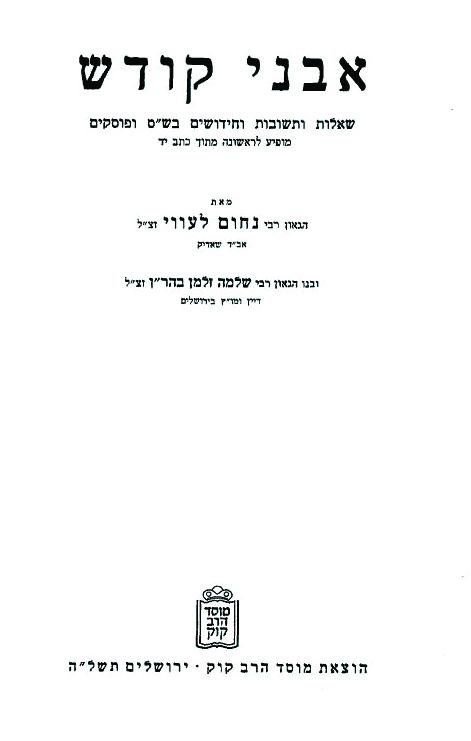 Reb Nachum was a talmid of Harav Shlomo Zalman Lifshitz, Rav of Warsaw and mechaber of Chemdas Shlomo, whom he quotes in his sefarim.

In 5604/1844, he moved to Eretz Yisrael and became one of the leading Rabbanim in Yerushalayim.

He was renowned for his prishus; he fasted from one Shabbos to the next and sat all day adorned in tallis and tefillin, teaching talmidim.

He never ate alone. When he wasn’t fasting, or when he broke his fast, he always brought home a poor man to eat with him.

Reb Nachum’s chiddushim on Bava Metzia and his she’eilos u’teshuvos were published under the name Avnei Kodesh.

His sons were Harav Shlomo Zalman Baharan and Harav Dovid Baharan (Baharan is an acronym for “ben Harav Nachum”). His son-in-law was Harav Yehudah Bergman.

In 1793, during the French Revolution, Marie Antoinette, the queen of France, was beheaded.

In 1859, radical abolitionist John Brown led a group of 21 men in a raid on Harpers Ferry in western Virginia. (Ten of Brown’s men were killed and five escaped. Brown and six followers ended up being captured; all were executed.)

In 1901, Booker T. Washington dined at the White House as the guest of President Theodore Roosevelt, whose invitation to the black educator sparked controversy.

In 1943, Chicago Mayor Edward J. Kelly officially opened the city’s new subway system during a ceremony at the State and Madison Street station.

In 1962, President John F. Kennedy was informed by national security adviser McGeorge Bundy that reconnaissance photographs had revealed the presence of missile bases in Cuba.

In 1987, a 58½-hour drama in Midland, Texas, ended happily as rescuers freed Jessica McClure, an 18-month-old girl trapped in an abandoned well.