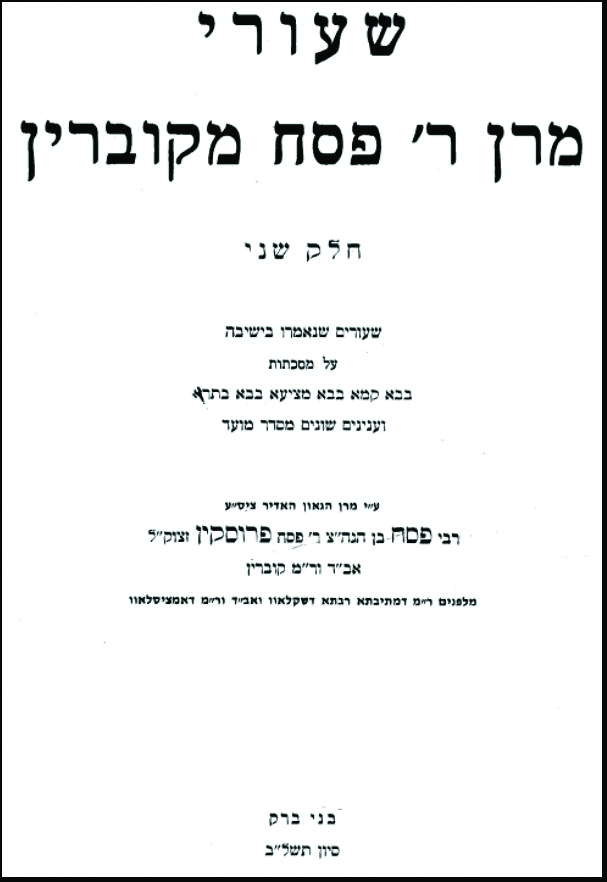 Harav Pesach Pruskin was born in 5639/1879 and named after his father, who had passed away several months earlier.

Not a gifted child, Pesach compensated for that with exemplary hasmadah and determination, harnessing the inspiration and toiling to satiate his thirst for Torah learning.

A chain of Providential events kept young Pesach in a Torah environment. When he was born, his mother was without any means of support. She took her five children to the home of her grandfather, Harav Pinchas Michael, Rav in Antipole, where her family provided her with minimal sustenance. The widow and her family lived in abject poverty.

The Rav of Antipole had a son who became attracted to haskalah. He ran off to Paris, where he eventually became a professor of philosophy and translated the Gemara into French. Needless to say, his parents were heartbroken and sat shivah in mourning for their once-beloved son, who had exchanged the Torah for French philosophy. They both died of heartache and the errant son came from Paris to visit their grave. The professor wept bitterly and begged forgiveness from his departed parents, impressing everyone as a genuine baal teshuvah.

Taking note of the poverty in which his niece lived, he tried to persuade the young widow to entrust him with her five children. He promised to raise them as religious Jews and provide them with a Torah education. She sent four children with him, two boys and two girls — but not Pesach, for he was too young. Later on the uncle came back asking for Pesach; but the eight-year-old boy refused to go with him, insisting that he must continue learning in cheder. Thus he was spared for a life of Torah.

Young Pesach continued learning, finding hunger and poverty no hindrance. In his teens he joined the yeshivah of the Chofetz Chaim in Radin, and from there he went to Slabodka, where he was inspired by the mussar of the Alter, Harav Nosson Tzvi Finkel.

A group of Slabodka talmidim once decided to visit the famed yeshivah in Kelm for Elul. No one was ever accepted to Kelm without prior permission, and so these boys were ordered to go back to Slabodka. But not Pesach Kobriner! With tears in his eyes, he begged the Alter of Kelm, Harav Simchah Zissel Ziv, “I’m

asking permission now. Please allow me to stay!” He alone remained — for over a year.

The Alter of Slabodka, constantly searching for suitable cities in which to establish yeshivos, selected Slutsk, a large city in White Russia, for his next undertaking. He dispatched Harav Isser Zalman Meltzer to be Rosh Yeshivah, and 14 talmidim — among them Pesach Kobriner. The 14 (known as the “yad hachazakah — the mighty arm” (“yad” has the numerical value of 14) served as the nucleus of the new yeshivah.

After his marriage to Tziporah Lipschutz, Reb Pesach earned his living as a night watchman in an orchard, guarding it from thieves who would rob the trees of their fruit. The job afforded him opportunity for study and solitude among the trees, and he used it to complete Rambam’s Moreh Nevuchim.

During this period he met his former Rosh Yeshivah, Reb Isser Zalman, who invited him to return to Slutsk as Mashgiach of the yeshivah. For some unknown reason, he refused the offer. Then one of his children became critically ill and the doctors gave up on the child. Reb Pesach made a vow that if the child lived, he would fulfill the Rosh Yeshivah’s request and dedicate his life to Torah. The child recovered and he kept his vow, accepting the position in the yeshivah.

In Slutsk, Reb Pesach experienced a breakthrough in his Torah study. He began to learn with new vigor and confidence, and in a short time a noticeable change took place in him. He began to expound on difficulties in Shas with new depth and clarity that amazed all. As time went on he amassed a great amount of knowledge and eventually he combined the three attributes of hasmadah, charifus and beki’us (diligence, sharpness, and vast knowledge).

Shklov, a major city in White Russia, caught the eye of Reb Pesach. It was that rare phenomenon — a Jewish city of substantial size without a yeshivah. The Alter of Slabodka, who was always eager to assist in the opening of a yeshivah, sent along some talmidim from Slabodka. A group of talmidim from Slutsk also went with Reb Pesach to Shklov, among them the son of the Rav of Strobin, Moshe Strobiner, who stayed in the yeshivah in Shklov for a number of years. He was later known to Klal Yisrael as the posek hador, Harav Moshe Feinstein, zt”l.

Reb Pesach was active in Agudas Yisrael, attending most of the Knessios Gedolos. He was among the first to recognize the value of the Bais Yaakov movement.

In 1931, in the early years of the Great Depression, Reb Pesach visited the United States to raise funds for his yeshivah. On his visit to St. Louis he made so favorable an impression that he was offered the position of Rav Hakollel, Chief Rabbi. He refused, expressing gratitude for the offer but explaining, “I can guarantee that my children will remain Torah Yidden in America, but I can’t guarantee the same for my grandchildren.”

In 1939, the Red Army marched into Poland. Upon occupying Kobrin, their first act was to close the yeshivah and the Bais Yaakov. Reb Pesach could not bear the pain of this twin tragedy, and on 11 Cheshvan, 5700/1939, when he was just 60 years old, his heart stopped beating.

His son, Harav Avraham Pruskin, escaped to America with some of his father’s written shiurim, which were later published by Reb Pesach’s grandson, Rabbi Nosson Zuchovski of Bnei Brak, under the title Shiurei Maran Rav Pesach MiKobrin.

In 1858, the seventh and final debate between senatorial candidates Abraham Lincoln and Stephen Douglas took place in Alton, Ill.

In 1860, 11-year-old Grace Bedell of Westfield, N.Y., wrote a letter to presidential candidate Abraham Lincoln, suggesting he could improve his appearance by growing a beard.

In 1917, Dutch dancer Mata Hari, convicted of spying for the Germans, was executed by a French firing squad outside Paris.

In 1928, the German dirigible Graf Zeppelin landed in Lakehurst, N.J., completing its first commercial flight across the Atlantic.

In 1945, the former premier of Vichy France, Pierre Laval, was executed for treason.

In 1946, Nazi war criminal Hermann Goering fatally poisoned himself hours before he was to have been executed.

In 1964, it was announced that Soviet leader Nikita S. Khrushchev had been removed from office.

In 1969, peace demonstrators staged activities across the country as part of a “moratorium” against the Vietnam War.

In 1976, in the first debate of its kind between vice presidential nominees, Democrat Walter F. Mondale and Republican Bob Dole faced off in Houston.

In 1991, the Senate narrowly confirmed the nomination of Clarence Thomas to the Supreme Court, 52–48.