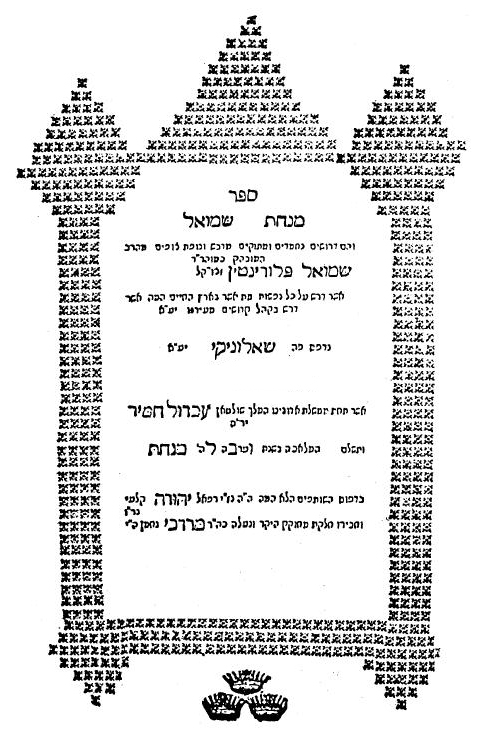 In 5258/1498, six years after expulsion from Spain, the Jews were expelled from Portugal.

Rav Shmuel was the son of Harav David Florintin.

He learned under his grandfather Rav Shmuel, the mechaber of Me’il Shmuel. He was also a talmid of Harav Avraham Gatinyue.

Later he headed his own yeshivah, where he taught many talmidim.

Rav Shmuel produced many sefarim; notable among them is Beis Haroeh, a collection of the works of the poskim on the Shulchan Aruch and commentaries, including some of the chiddushim of Rav Shmuel. This sefer was cherished by Rabbanim and poskim, including many of the Sephardic Gedolim, notably the Chida and Harav Chaim Palagi, as a reliable source for psak halachah.

Among the other sefarim that Rav Shmuel wrote: Minchas Shmuel, a collection of his drashos, and She’eilos U’Teshuvos Olas Shmuel, his halachic responsa.

His sons were Rav Dovid and Rav Moshe, and his son-in-law was Harav Avraham Shirano.

In 1763, American entrepreneur John Jacob Astor was born in Walldorf in present-day Germany.

In 1862, during the Civil War, Congress approved the Second Confiscation Act, which declared that all slaves taking refuge behind Union lines were to be set free.

In 1918, Russia’s Czar Nicholas II and his family were executed by the Bolsheviks.

In 1936, the Spanish Civil War began as right-wing army generals launched a coup attempt against the Second Spanish Republic.

In 1938, aviator Douglas Corrigan took off from New York, saying he was headed for California; he ended up in Ireland, supposedly by accident, earning the nickname “Wrong Way Corrigan.”

In 1944, during World War II, 320 men were killed when a pair of ammunition ships exploded at the Port Chicago Naval Magazine in California.

In 1955, Disneyland had its opening day in Anaheim, Calif.

In 1962, the United States conducted its last atmospheric nuclear test to date, detonating a 20-kiloton device, code-named Little Feller I, at the Nevada Test Site.

In 1975, an Apollo spaceship docked with a Soyuz spacecraft in orbit in the first superpower link-up of its kind.

In 1998, Nicholas II, last of the Romanov czars, was formally buried in Russia, 80 years after he and his family were slain by the Bolsheviks.