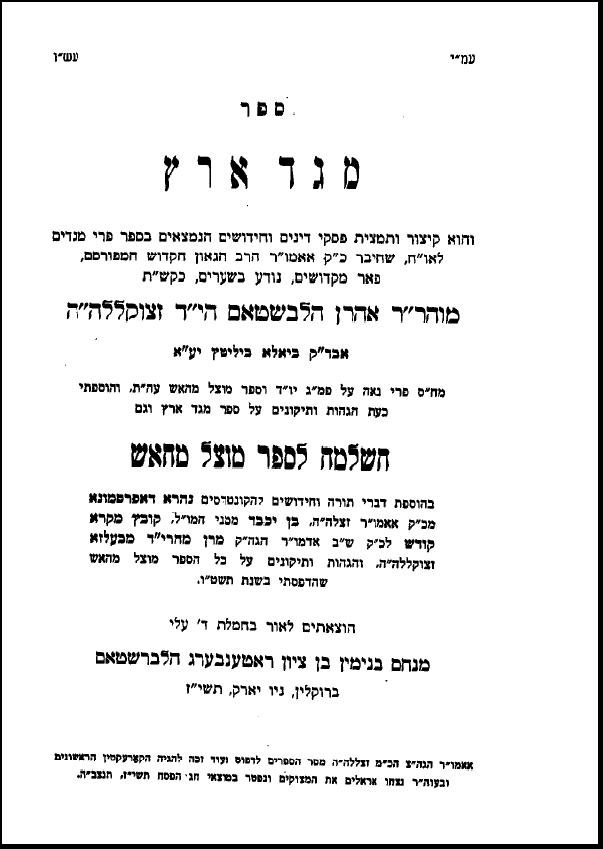 In 1657/2104 B.C.E., the mountaintops became visible, during the Mabul, according to Rabi Eliezer.

In 5703/1943, the mostly Jewish captives in Treblinka initiated a revolt.

In 5707/1947, a British ship seized the S.S. Exodus, which was carrying 4,000 Jewish Holocaust survivors to Eretz Yisrael, and forced it to return to Germany.

Harav Aharon Halberstam was born in 5586/1826, in Rudnick. His father was Harav Chaim, the Divrei Chaim of Sanz.

He was a talmid of his father, and would also travel to the courts of other leading Rebbes, among them Harav Tzvi Hirsh of Rimanov, Harav David of Tolna, the Sar Shalom of Belz and Harav Avraham of Trisk.

Reb Aharon married the daughter of the naggid Reb Yaakov Weinberger of Dukla.

Following his father’s petirah (25 Nisan 5636/1876), Reb Aharon was the only son who was not appointed Rebbe. He refused to accept the chassidim who came to his house.

During his tenure as Rav, Reb Aharon applied a cherem against one of the residents of the city, who refused to accept the ruling of his beis din. This incident led to Reb Aharon being imprisoned for six weeks.

Reb Aharon wrote down many chiddushei Torah, but shortly before his passing, he burned all his manuscripts.

After taking ill, Reb Aharon traveled to Vienna to meet with doctors. He was niftar as he made his way home, on Rosh Chodesh Av 5663/1903, at age 77. He was buried in the ohel with his father, in Sanz.

Reb Aharon’s sons were Harav Shmuel Shmelke; Harav Shalom, who served as Rav in Pikli and Sanz; and Harav Aryeh Leibish of Sanz-Gribov. His son-in-law was Harav Moshe Halberstam of Bardiov.

Some of his divrei Torah were published in Meged Eretz, by Harav Aharon Halberstam of Biale-Bilitz (a great-nephew) and in other sefarim as well.

In 1663, King Charles II of England granted a Royal Charter to Rhode Island.

In 1776, Col. John Nixon gave the first public reading of the Declaration of Independence, outside the State House (now Independence Hall) in Philadelphia.

In 1853, an expedition led by Commodore Matthew Perry arrived in Yedo Bay, Japan, on a mission to seek diplomatic and trade relations with the Japanese.

In 1889, The Wall Street Journal was first published.

In 1919, President Woodrow Wilson received a tumultuous welcome in New York City after his return from the Versailles Peace Conference in France.

In 1947, demolition work began in New York City to make way for the new permanent headquarters of the United Nations.

In 1958, President Dwight D. Eisenhower began a visit to Canada, where he conferred with Prime Minister John Diefenbaker and addressed the Canadian Parliament.

In 1972, the Nixon administration announced a deal to sell $750 million in grain to the Soviet Union. (However, the Soviets were also engaged in secretly buying subsidized American grain, resulting in what critics dubbed “The Great Grain Robbery.”)

In 1975, President Gerald R. Ford announced he would seek a second term of office.