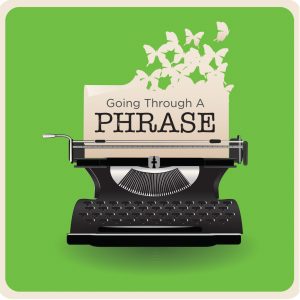 I have an idea for a story. It would be about a character from a primeval forest — the king’s Keeper of Woods. Only, instead of Woods, he would be the Keeper of Words.

The Words Keeper would gather all the words in the kingdom … and guard them in a towering fortress to protect them from misuse.

When I was a child, the first time I saw the Brooklyn Public Library branch near my school, it seemed like a royal fortress. Then that impression paled the first time I beheld Grand Army Plaza.

Decades later, I was undazzled when I visited Buckingham Palace. Should I tell you my first reaction? … “It must cost a fortune to heat this place!”

No, the fortress isn’t the Oxford English Dictionary (OED) — Her Majesty’s Treasury of 2.3 billion words. That grand treasure house is a museum. OED archives all the words and categorizes them. But it doesn’t guide you how best to use them.

Avi L. of Boro Park is a regular correspondent and ringside cheerleader of “Going Through a Phrase.” He is the unofficial ringleader of the Phrase Phollowers Phriends Phorce.

After reading my column on portmanteaus and other new words, Mr. L. asked, “I was wondering, when and who decides, when these new type of words should become ‘proper’ or ‘legal’ English?”

Good question. The answer is not so simple. Pull up a chair. …

In this corner are the descriptivists — largely linguists — scholars and lexicographers who record and describe how a language is actually being used by native speakers, without dictating “standard” usage.

And in this corner are the prescriptivists (descriptivists call them “purists”) who “seek to guide users of a language — including native speakers — on how to handle words as effectively as possible.”

That last quote is from Bryan Garner, editor-in-chief of Blacks’ Law Dictionary and shelves of other books on lexicography and law, including two co-authored with the late Supreme Court Justice Antonin ­Scalia. An article in The New Yorker about Garner and Scalia quoted the Justice:

“‘You’re something of a SNOOT yourself,’ Scalia told Garner as they ended their interview, invoking [another of Garner’s collaborators, David Foster Wallace’s] pet phrase for a grammar and usage fanatic, ‘and that makes me happy.’”

In describing Garner’s work, The New Yorker said, “He might be the world’s premier authority on grammar and usage in English.”

I tweeted Garner, asking him about the change: “The new title means it’s more than just a 4th edition, doesn’t it?”

He tweeted back: “In a way, yes. But perhaps the new title denotes what it always was.”

Can you imagine? Two grown men — one of them the leading lexicographer of our time — tweeting to each other! What hath G-d wrought?

No, that wasn’t from Alexander Graham Bell. It’s actually a verse from Bamidbar [23:23]. And it was the text of the first telegraph message sent by Samuel Morse in 1844.

I’m thinking of launching a service to compete with Twitter: I call it Kvetcher. All messages are limited to two characters: oy or nu. Kvetcher will be the world’s first antisocial medium.

Garner is a prescriptivist in the grand tradition of H.W. Fowler. He is a favorite target of permissive descriptivist linguists (still with me?) who call for liberté, égalité, (but not always fraternité) in language.

In an interesting paradox, they cite the authority of numbers against what they consider the authoritarianism of verbal tradition.

Now GMEU turns the tables on the linguirati number crunchers. Garner is the first author licensed to reproduce data from Google’s Ngram Viewer of the entire corpus of English books scanned by Google. And it’s a corpus delicatessen.

I keep two books at hand on my desk: The New Oxford American Dictionary and Garner’s Modern English Usage. They are my first go-to and my court of last resort for what words are meant to mean.

Thus, by the power vested in me by Avi L. and the Phrase Phollowers Phriends Phorce, I hereby dub Bryan Garner the Words Keeper of the English language.