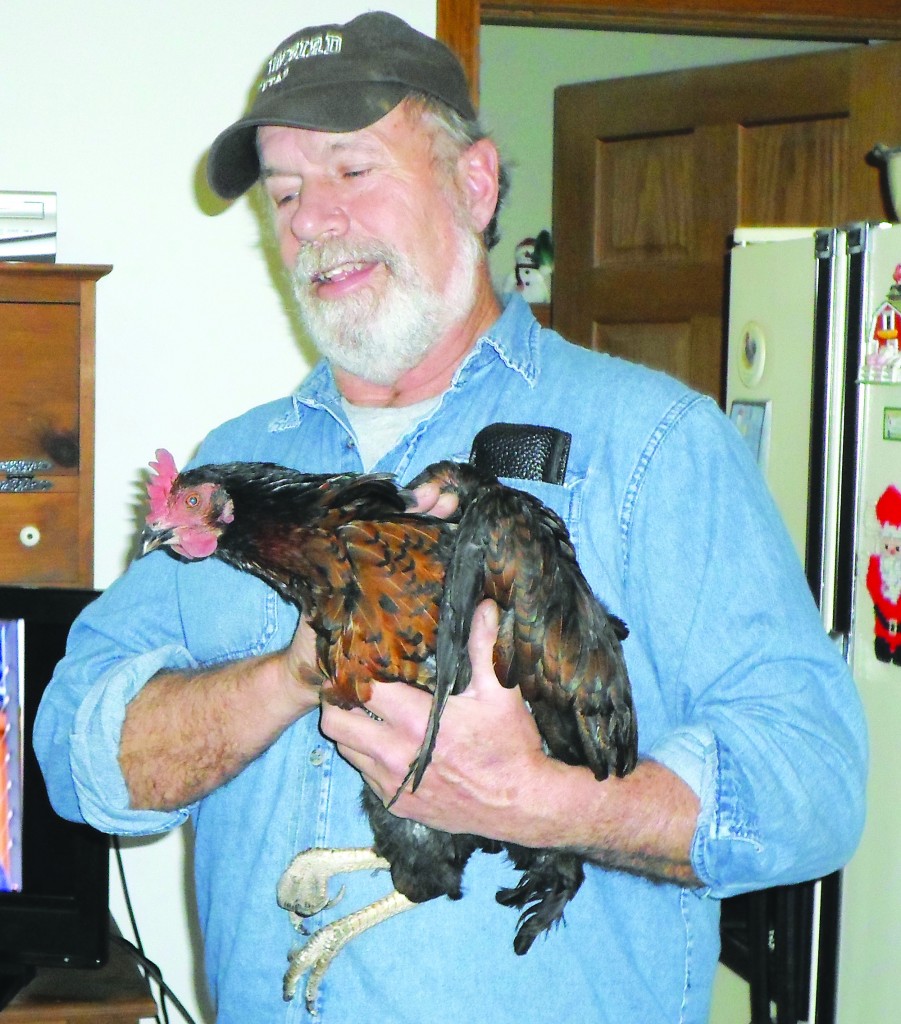 MILWAUKEE (AP) — A Wisconsin couple says clucks, not fire trucks, helped them escape a blaze at their home.

Dennis Murawska, 59, said a pet chicken named Cluck Cluck woke his wife Susan Cotey, 52, with loud clucking from its cage in the basement two floors below about 6:15 a.m. Thursday. The couple’s two cats also were running around the main floor.

Murawska said he had been half awake but didn’t know about the fire because the smoke alarms hadn’t gone off. He realized something was wrong when his wife got up.

“The chicken gets quite vocal when she gets excited,” he said.

Cluck Cluck came from a nearby farm in Alma Center, about 135 miles east of Minneapolis, Murawska said. When the chicken began wandering over to his house, his neighbor said he could kill it because it wasn’t producing any eggs. But Murawska felt sorry for Cluck Cluck because she had a mutated foot and decided to keep her. He fed the bird and built a coop, and then his wife let Cluck Cluck into the basement on cold nights.

“I spent way more money than I ever should’ve,” Murawska said by telephone. “I guess it paid off.”

The couple escaped, and firefighters found the chicken in its cage and one of the cats alive in the basement. Another cat hasn’t been found and is presumed dead, Murawska said. The couple and their surviving cat checked into a Black River Falls hotel, while Cluck Cluck is staying with the neighbor who used to own her.

Alma Center Fire Chief Jeff Gaede said the fire started in the attic of the attached garage and was not suspicious. The house was a total loss, but it could have been worse — if not for the chicken.

“We are used to hearing about a dog or cat or something, but we never heard of a chicken waking up a resident for a fire,” Gaede said. “That’s pretty amazing.”

HOMESTEAD, Fla. (AP) — Visitors to parts of Everglades National Park are getting tarps and bungee cords to make their vehicles less delectable to vultures.

Migrating vultures have developed a habit of ripping off windshield wipers, sunroof seals, and other rubber and vinyl vehicle parts. Visitors to the park’s Homestead and Flamingo entrances are loaned “anti-vulture kits” to protect their vehicles.

Park wildlife biologist Skip Snow tells The Miami Herald that the vultures are migrating as normal. It’s just not clear why the birds are picking at parked cars and trucks. Park employees have tried to scare away the vultures, but nothing has worked.

Jeannette “Jet” Crabb and Ben Amador were both running for city council in Seguin. They finished tied after a Dec. 18 runoff, 141-141. So city Mayor Don Keil decided the race Thursday by flipping a coin.

Crabb and Amador each received slips of paper — one that said “heads,” one with “tails.” Then Keil threw a silver dollar in the air. It landed on the table as tails. Crabb won.

She was immediately sworn in to begin a four-year term.

The Texas Election Code allows ties to be settled by a “casting of lots.”

When it comes to the most annoying words or phrases used in conversation, those four top the list in 2012, according to the annual Marist Poll.

The results mirrored last year’s survey when “whatever” topped the annoying words list for a third straight year. But “seriously,” named by 7 percent last year, dropped off the list entirely — really. Marist questioned 1,246 adults in a U.S. nationwide, telephone survey.

Results showed differences by age and regions, with people younger than 45 or in the Northeast especially annoyed by “like,” while “you know” offended more of the 45-and-over set.

(Reuters) – The world’s supply of maple syrup just got a little safer.

Police in Canada’s French-speaking province of Quebec announced a breakthrough in the mysterious disappearance last August of truckloads of Canadian maple syrup.

Three suspects were arrested, vehicles were seized and syrup-making equipment recovered after a manhunt in Canada and the United States, the Quebec provincial police force said in a statement on Tuesday.

The Quebec police statement did not say what happened to the syrup or how much was stolen, but Canadian news sources said $18 million to $22 million worth was taken and two-thirds of it was recovered.

The syrup heist was uncovered by a routine inventory check by the Federation of Quebec Maple Syrup Producers earlier this year. The federation said the loss was significant but did not specify the size of the loss from the warehouse that held 10 million pounds of maple syrup, worth some $30 million.

Quebec produces about 75 percent of the world’s maple syrup, a favorite on pancakes and waffles and also used in foods ranging from sweets and pastries

SCRANTON, Pa. (AP) –  A northeastern Pennsylvania newspaper has just received a calendar — except the year is 1950.

Scranton’s The Times-Tribune reports a mail carrier delivered it 63 years late without explanation on Friday.

The calendar includes a greeting from a railroad executive dated December 1949. Flanagan died that month.

A U.S. Postal Service spokesman says lost mail is sometimes found when a machine is dismantled or office space is renovated.

Times-Tribune publisher Bobby Lynett says he’ll see if the Steamtown National Historic Site railroad museum is interested in the calendar. If not, he’ll display it in the newspaper’s offices.