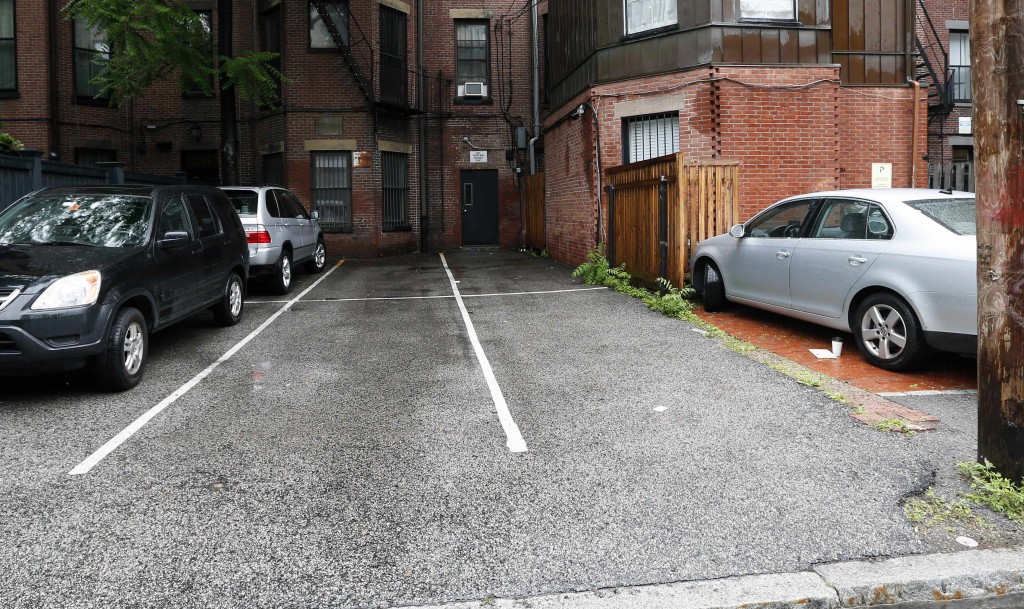 BOSTON (AP) – Parking is such a precious commodity in Boston that one woman was willing to pay $560,000 for two off-street spaces near her home.

Lisa Blumenthal won the spots in the city’s Back Bay neighborhood during an on-site auction Thursday held in a steady rain by the Internal Revenue Service. The IRS had seized the spots from a man who owed back taxes.

Blumenthal, who lives in a multimillion-dollar home near the parking spaces, tells The Boston Globe she didn’t expect the bidding to go quite so high for the spots she says will come in handy for guests and workers.

The median price of a single-family home in Massachusetts is $313,000.

HELENA, Mont. (AP) – A well-traveled cat named “Mata Hairi” will soon be reunited with her owner after spending nearly 10 months traveling thousands of miles with a hitchhiker who rescued her from the rain.

The feline adventure started in Portland, Ore., when the cat’s owner, Ron Buss, let her out of the house on Sept. 1. The cat, white with patches of dark gray, usually left for no more than a couple of hours at a time, but this time she didn’t return.

When Michael King, who has been homeless since 2003, spotted Mata Hairi, she was crouched under a table at a cafe, trying to stay out of the pouring rain.

“I see cats all the time,” King said. “I don’t pick up cats. I don’t want a cat, especially a full-grown one.

And he definitely didn’t want to haul around the needed food and bowls that would add 20 pounds to his pack.

“Something told me to grab her. I don’t know,” King told the Independent Record.

He named the cat Tabor, for the cafe where he found her.

The cat traveled with King as he hitchhiked to California, back to Portland and out to Montana, where King’s foster father lives.

People often stopped them and asked to take photos.

“Very rarely do you see a cat riding on the top of someone’s backpack.” King said.

King and his foster father, Walter Ebert, recently took the cat to a veterinarian in Helena, where a scan found a microchip, and the vet was able to contact Buss.

Buss is planning a party marking Mata’s return, and King agrees it’s an occasion for celebration.

But it’s going to be emotional for King, too.

ALBUQUERQUE, N.M. (AP) – Police say a New Mexico woman who confronted a masked intruder in her home stumbled upon a shocking discovery when she ripped off his disguise — the robber was her grandson.

KRQE reports that 22-year-old Thomas Clark is facing robbery charges after police say he stole his grandmother’s purse during a bizarre robbery at an Albuquerque home.

According to police, the woman confronted the Clark, dressed in black with a purple bandana over his face, last week when he broke into her home.

Police say the woman yanked off the mask but Clark pushed her and fled with her purse.

He was arrested later at his parents’ home.

Police say he confessed and said he did it for gambling money.

It was unclear if he had an attorney.

Bear With Head Stuck in Jar Is Rescued in Pa.

JAMISON CITY, Pa. (AP) – Four central Pennsylvania residents said they used only a rope and a flashlight during a wild chase to rescue a young bear whose head had been stuck in a plastic jar for at least 11 days.

The frightened but powerful bruin fell into a swimming pool at least twice during the ordeal, according to a report Saturday in the Press Enterprise of Bloomsburg. But the group eventually yanked off the jar and set the animal free.

“I thought, ‘No one is going to believe us,’“ said Morgan Laskowski, 22, the bartender at the Jamison City Hotel and a member of the impromptu bear-wrangling team.

Area residents first spotted the 100-pound bruin with its head in a red jar on June 3, but it eluded game wardens. The animal was attracted to the container because it appeared to have once contained cooking oil.

“He put his head in, and had a problem,” said Mike Jurbala, 68, another rescuer. “He’d have died in a couple more days.”

Jurbala saw the bear Thursday night as he was leaving the bar at the Jamison City Hotel. He called Jeff Hubler, a local employee of the state Game Commission who had been among those trying to capture it for days with a lasso.

The two teamed up with Laskowski and her mother, bar owner Jody Boyle, to follow the bear through the darkness.

“You knew where he was because you could hear him banging into things,” Jurbala said.

They cornered the bear in a resident’s backyard, where it ended up falling into a pool a couple of times. Eventually, they wrangled the animal into a position where Hubler could pull off the jar.

“You’d think the bear would be weak, because it hadn’t eaten or drunk for a week, but it was strong,” Boyle said.

Hubler said people should keep lids on food jars that they throw away.