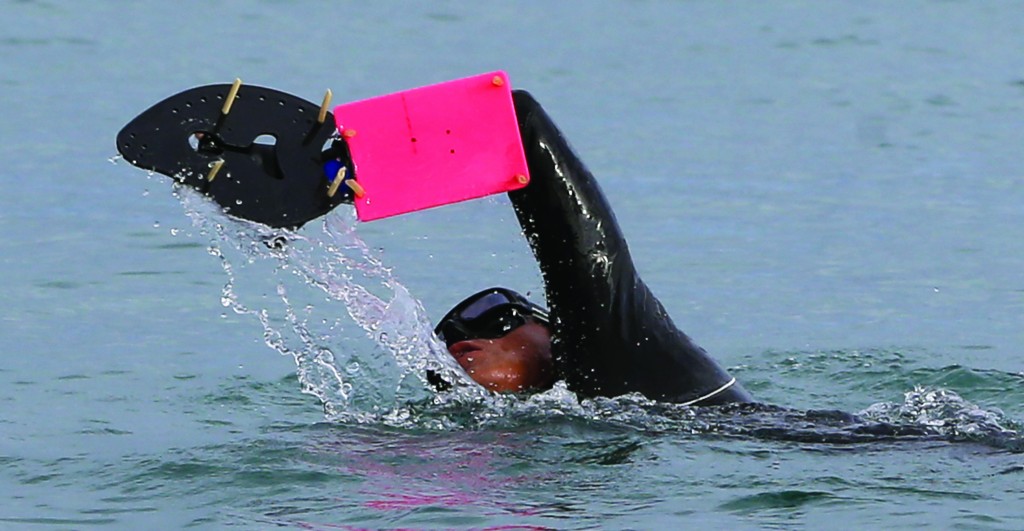 BEIJING (AP) – A staged protest claiming that city officials had beaten a sidewalk vendor to death in central China went awry when the man playing dead under a white sheet was overcome by the region’s heat wave and sprang up to quaff a bottle of water, state media reported Monday.

“It’s too hot. I can’t bear it anymore,” the man was quoted as saying by state-run Xinhua News Agency.

More than 10 men had gathered Saturday with a gurney that purportedly carried the vendor’s body, covered by a sheet, in the Hubei provincial capital Wuhan. They were demanding tens of thousands of yuan (thousands of dollars) in compensation for the alleged death, Xinhua said.

The incident drew 300 onlookers and about 80 police officers.

It was not immediately clear how the group intended to press their claims without submitting the body for investigation. In any case, the game was up when the man — as Xinhua reported — jumped up from under the sheet.

The man on the gurney was identified as Han, who has been detained for disturbing social order, said a district administration official in Wuhan contacted by telephone. She refused to give her name.

Han told the police that urban management workers — known as “chengguan” — clashed with the group of vendors earlier Saturday after telling them their drinks stands were blocking traffic, Xinhua said.

Many members of China’s public have long resented the heavy-handed tactics of the country’s chengguan. Though they have no legal authority to use force, they are often accused of beating people who commit minor infractions in shows of power that have fueled social tension, triggered riots and aggravated public discontent against the government.

ACWORTH, Ga. (AP) – A Georgia man who lost his wallet while waterskiing in North Carolina now has it back — 24 years later.

Burton Maugans of Acworth said he got a call from a stranger who knew his age, name and birthdate. Maugans says he realized fairly quickly the stranger had found his wallet because it’s the only one he’d ever lost.

The Georgia man says he was 18 when he went into the water with his wallet and it disappeared somewhere near Holden Beach in North Carolina. North Carolina resident Jim Parker found it recently and searched online for its owner.

The wallet arrived in the mail in Georgia on Thursday. It still contained Maugans’ high school identification from 1987, a library card and even an old bank card.

Man to Go Solo Hauling Ton of Bricks Across Lake

ALGONAC, Mich. (AP) – A long-distance swimmer who calls himself “The Shark” is ready to jump into Lake St. Clair for a 30-hour, 22-mile dip.

If that isn’t enough, Jim Dreyer plans to haul dinghies filled with 2,000 pounds of bricks.

The 49-year-old has made direct crossings of each of the five Great Lakes.

He plans to begin his latest swim Monday from a spot near Algonac, and it’ll end Tuesday at Detroit’s Belle Isle.

And he’s doing it without a support boat.

One of the dinghies is equipped with a radar target so Dreyer will show up on radar screens of passing freighters. He has to feed himself and won’t leave the water until coming ashore in Detroit.

Dreyer is trying to raise money and awareness for Habitat for Humanity.

DORSET, Minn. (AP) – Robert “Bobby” Tufts hasn’t made it to preschool yet, but he’s already been elected twice as mayor of a tiny tourist town in northern Minnesota.

Mayor Tufts’ name was picked Sunday during annual Taste of Dorset festival to be mayor of Dorset for a second term. It has no formal city government and has a population of 22 to 28, depending on whether the minister and his family are in town.

Anyone could vote as many times as they like — for $1 a vote — at any of the ballot boxes in stores around town. The proceeds go toward organizing the festival.

Bobby was only 3 when he won election last year. His mother, Emma Tufts, said she and her son, who turns 5 in October, got choked up when his name was pulled for re-election Sunday.

The boy picked a random man out of the crowd to pick the name out of a clear tub. and the man was blindfolded twice, she said.

While this was happening, Bobby told the crowd how to musky fish, she said.

“He’s been going since 3 o’clock yesterday with cameras on his face,” she said Sunday afternoon. “He’s having a long day but he’s done really well.”

Asked how he felt during a phone interview, a tired Bobby made clear he was done answering questions. “I want to be with the boys,” he told his mother.

They were on their way to dinner and then planned to go fishing or have a bonfire to celebrate. Bobby, of nearby Nevis, starts preschool this fall.

Emma Tufts said her son’s agenda includes raising money for the Ronald McDonald House Charities of the Red River Valley in Fargo, N.D., and a new welcome sign for Dorset, which bills itself as the Restaurant Capital of the World.

They already raised $750 from a walk this summer and planned to donate half the proceeds of Sunday’s T-shirt sales to the charity.