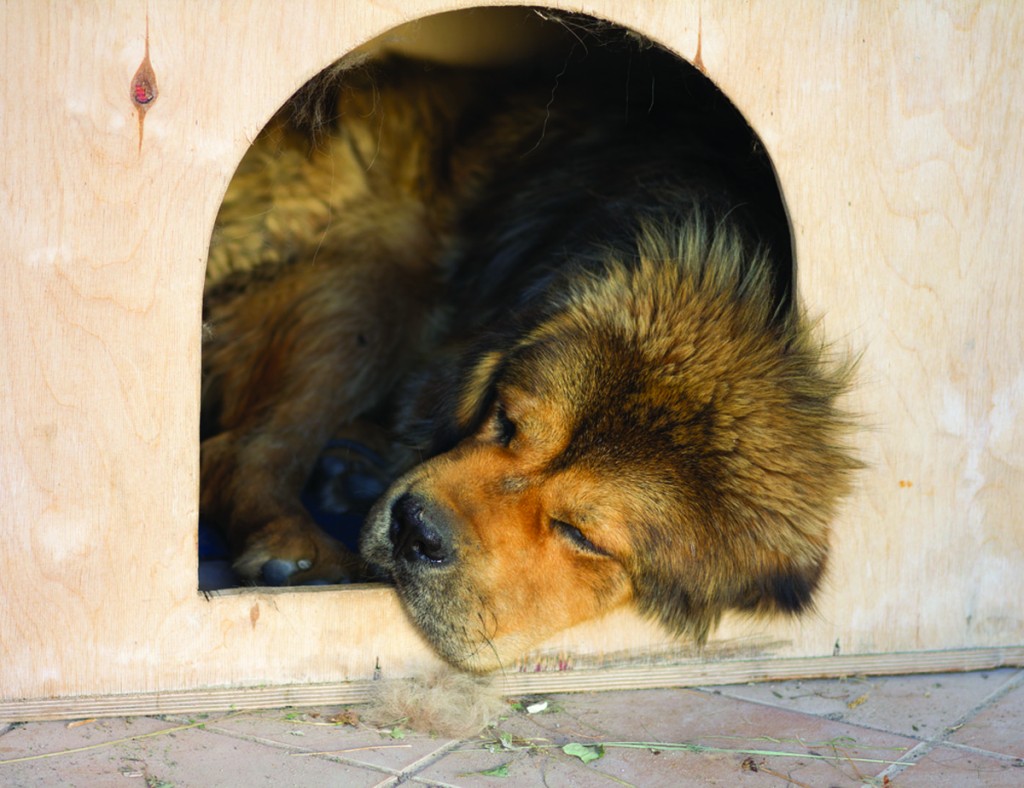 A zoo in the central China city of Luohe attempted to pass off a Tibetan mastiff as a lion, state media reported. The large, aggressive breed has a trademark bushy mane that gives it a lion-like appearance, but its vocalizations are more woof than roar.

The Beijing Youth Daily said Friday the zoo also had a dog in the wolf cage, foxes in the leopard enclosure and nutrias in the snake den.

Though the zoo said it wasn’t trying to fool anyone, it issued an apology to the public and closed for “rectification,” reported another newspaper, the Beijing News. It also planned to reorganize its public-private management structure, although the details were still being worked out, the newspaper said.

The Beijing Youth Daily quoted zoo manager Liu Suya as denying any attempt at deception, saying the lion had been lent out for breeding and would be back soon. The dog belonged to a friend of a zoo keeper who was on a business trip and needed a place to keep his pet while away, Liu said.

Liu said the leopard had also been lent out for breeding, while the snake and wolf were merely sheltering from the torrid summer heat. The substitute animals had been drafted because an empty cage would have “looked bad,” Liu said.

“If visitors require an explanation, we’d be happy to give it to them,” Liu said.

Calls to the zoo rang unanswered. The facility, with more than 20 animals on display, sits inside the city’s People’s Park and is co-run by the municipal government and a private contractor.

The Beijing Youth Daily said it was informed of the odd situation by a zoo visitor who had been taking her son around the enclosures to teach him the sounds that various animals make.

“He said they were fooling us because the ‘lion’ was actually barking,” the visitor was quoted as saying. “The sign clearly said African lion so I can only think that this was an attempt to fool the visitor.”

ATLANTA (AP) — The tradition of travelers paying the toll for the driver behind them on Georgia Highway 400 is back after motorists complained and Gov. Nathan Deal asked for it to be reinstated.

Last month, the State Road and Tollway Authority banned the practice after some motorists complained that cashiers were pocketing the extra 50 cents instead.

Authority spokesman Bert Brantley says the agency had already been working to find a way to reinstate the practice after motorists began complaining when they couldn’t donate a toll.

On Friday, the agency worked with the cashiers to come up with a solution that will keep the donated money visible so motorists can trust their good deed will help someone in need.

PORTLAND, Ore. (AP) — When the engine of their tuna boat exploded last week, owners Mark and Cynthia Schneider had no choice but to jump into the ocean and leave behind their two cats on the doomed vessel.

After being rescued by a nearby boat, they were stunned when they looked out at their sinking boat and saw one of the cats — a tabby named Jasper — on the bow. The other cat, a calico named Topaz, was in the ocean and eventually swam through the debris to safety on the rescue boat.

Jasper remained stranded at sea on the bow. As the boat sank deeper into the ocean, he was forced to jump in and swim toward his owners about 100 yards away. The cat made it to safety unharmed.

The 60-foot Sea Princess departed from Winchester Bay in late July and sank 80 miles off the coast on Aug. 5. The Schneiders, who have been fishing together for 27 years, lost their boat, $40,000 worth of tuna and most of their possessions. The story was first reported by KTVZ of Bend.

Mark Schneider, 52, said he checked the engine room about 45 minutes before the explosion and nothing seemed amiss. Then the engine backfired several times before a blast that tore off the side of the boat. The Schneiders suffered flash burns to their faces, but did not require hospitalization.

Not immediately realizing the extent of the damage, he headed to the engine room. When he looked over his shoulder, he saw ocean and sky where there should have been hull. Water started pouring in, and he and Cynthia knew it was time to abandon ship — but not without Jasper and Topaz.

“I kept calling for the kitties, but I’m sure they were traumatized by the blast and didn’t know what was going on,” Schneider said. “Cynthia finally snapped me out of that and said: ‘We gotta get off the boat. ’”

The couple went overboard and spent 15 to 20 minutes in the water before being rescued by their fishing partner Rick Goche.

Mark Schneider said the bow of the boat was a natural spot of refuge for Jasper.

“When we were in port he would just sit up there on the bow and watch the seagulls and people walk by on the dock,” Schneider said. “I’m sure that’s where he went when he didn’t feel safe.”

The couple lives in Central Oregon when they are not at sea. They sold their old boat a few summers ago to upgrade to the larger Sea Princess, a wooden boat built in 1924 that provided more stability in choppy seas and had more storage capacity. It was a fixer-upper that took a lot of time and money to repair, Schneider said.

JONESTOWN, Pa. (AP) – A Pennsylvania restaurant owner is trying to find a good home for an 8-foot stuffed polar bear.

For years, patrons of the Woods Creek Grill outside of Harrisburg have enjoyed posing for pictures with the bear, which was legally shot in Alaska in 1967, the Harrisburg Patriot-News reported.

“We wanted things people could come in and see, things they could walk up to,” he said. “I can’t tell you how many hundreds of people had their photographs taken with her,” DeWees told the paper.

But when he shifted careers and decided to sell the restaurant, he learned that the law on bears has shifted, too.

Now, the bear can’t cross state lines or be sold to someone in another country because of endangered species laws, even though it was shot almost 50 years ago.