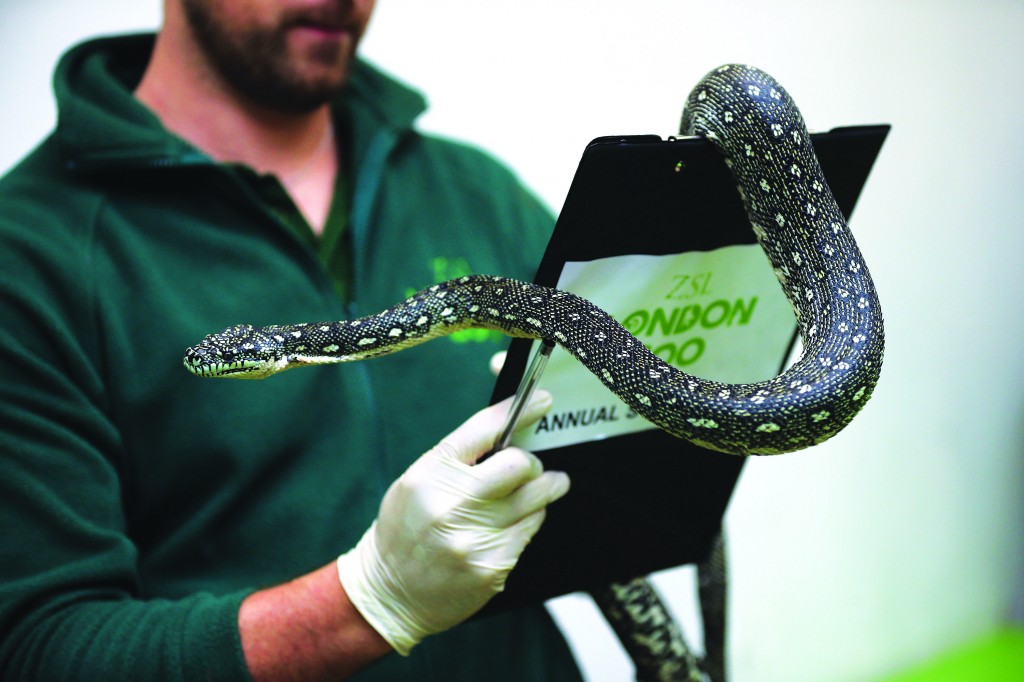 LONDON (AP) – In a sea of flapping black and white flippers, Ricky is hard to miss: He’s got spiky yellow feathers, a flamboyant character, and he’s the only rockhopper among the dozens of penguins living in the London Zoo.

That’s a big help for keepers who embarked Thursday on their annual stock-taking of all the zoo’s residents. It’s no easy task, when there are over 17,500 creatures — including the tarantulas, locusts and snails.

The same scene was being repeated at zoos throughout Britain Thursday — the census is nationwide.

At the London Zoo, keepers hope the new year will bring some company to Ricky, the zoo’s lone rockhopper since 2011.

“Ricky’s quite a unique character — he was rejected by his parents and was hand-reared. He’s more interested in zoo keepers than in other penguins,” said zoological director David Field. “It’s time to get him some rockhopper partners.”

In the meerkat enclosure, 11 of the small mammals were only too happy to be counted, climbing onto a keeper’s clipboard seeking attention and food.

An all-female family of nine otters likewise rushed forward at the sight of their favored delicacies. In the invertebrates section, a palm-sized red-kneed tarantula called Jill caused a stir among visitors when she was lifted out of her box for inspection.

“This is quite a docile one,” said keeper Amy Callaghan, who held the spider out in her hand for photographers. “I was a little bit wary of them at first, but now I think they’re brilliant.”

The census is required as part of the license terms of British zoos, and the data is used for zoo management and international breeding programs for endangered animals. The final tally could take weeks.

Most animals in the zoo have microchips in their bodies, making counting a little less daunting. Fish and animals with camouflage properties — such as leaf insects — are trickier, and the tiniest ones such as ants are counted in colonies, not as individuals.

New additions to the zoo being counted for the first time included baby Ziggy, an endangered white-naped mangabey monkey, and Maxilla, a black-and-white colobus monkey.

The zoo also welcomed a pair of new Sumatran tigers — male Jae Jae from a zoo in Ohio and female Melati, from Perth, Australia. The endangered tigers were matched by an international breeding program to ensure a genetically diverse population of animals.

“We breed them in the zoo because they are running out of time in the wild,” said Field, who’s hopeful the tigers will soon produce cubs.

SAN FRANCISCO (AP) – A rapt crowd followed a trail of bubbles that zipped over the surface of a seaside pond in the ruins of a 19th century bath in San Francisco.

San Francisco’s newest star — the first river otter seen in the city in decades — surfaced its whiskery head furtively, a mouth full of sea grass. The crowd oohed as waves pounded rocks offshore, a briny smell and chill in the air.

The otter ducked back under water and took the sea grass underneath a concrete remnant of the historic baths, where the animal was building a nest.

“We came here to see the baths and this was just a bonus,” said Eliza Durkin, who brought her son Jonathan to the site for a school project on historic places.

Beyond tourists, the otter has mystified and delighted conservationists, who are piecing together clues to figure out how he got there. The furry creature was first spotted by birdwatchers in September.

River otters once thrived in the San Francisco Bay area, but development, hunting and environmental pollution in the 19th and 20th centuries has taken its toll on the once thriving local population.

The critters are a living barometer of water quality — if it’s bad they cannot thrive. But new populations being seen north and east of San Francisco are giving hope to conservationists that years of environmental regulations and new technologies are making a difference.

“The fact that this otter is in San Francisco and doing so well in other regions of the Bay Area, it’s a good message that there’s hope for the watershed,” said Megan Isadore, director of outreach and education for the River Otter Ecology Project, a group that studies otter populations.

The group said until now it had no evidence the creatures had returned to San Francisco, and the last sighting was nearly a half-century ago as best they can tell.

The otter is nicknamed “Sutro Sam” after the old baths, which were named after former San Francisco Mayor Adolph Sutro, who built the building which at the time was an engineering marvel.

The facility opened in 1896 on a cliff facing the Pacific Ocean, its baths fed by the salty ocean tides and a freshwater seep. They were torn down and burned in a fire in 1966, and the building’s carcass has long been a tourist draw.

The aquatic mammal seems to have found the mix of the environment he needs to make a home, to the delight of tourists and local nature lovers.

“They do need freshwater to drink and keep their fur clean,” Isadore said. “They are also happy in salt and brackish water — wherever there is food — and he is getting freshwater from seeps behind the baths.”

“Habitat destruction had an impact on the river otters,” said Dorren Gurrola, a science teacher at the Marine Mammal Center, which studies Sam’s relatives, the sea otter. “So it’s always exciting to see these animals return to their habitat.”

Young males like Sam often  travel away from groups, looking for food. If they find a new, hospitable habitat, others may join and create the basis of a new colony, Gurrola said.

While there is no certain reason for Sam’s appearance in San Francisco, Isadore and biologists working to unlock more clues have some leads to go on.

He could have swam across the bay’s mouth from Marin County, and scat collected from Sam will be analyzed to see if there’s a genetic link to that population. But now, Sam seems to be happy swimming around and munching on small fish, including goldfish discarded in the area.

“We’re just trying to piece things together in a logical way,” Isadore said.

SAO PAULO (AP) – Guards thought there was something suspicious about a little white cat slipping through a prison gate in northeastern Brazil. A prison official says that when they caught the animal, they found a cellphone, drills, small saws and other contraband taped to its body.

Alagoas state prisons spokeswoman Cinthya Moreno says that the cat was caught A week ago at the medium-security prison in the city of Arapiraca.

The O Estado de S. Paulo newspaper reported Saturday that all of the prison’s 263 inmates are suspects in the smuggling attempt, though it says a prison spokesman said “It will be hard to discover who is responsible since the cat does not speak.”