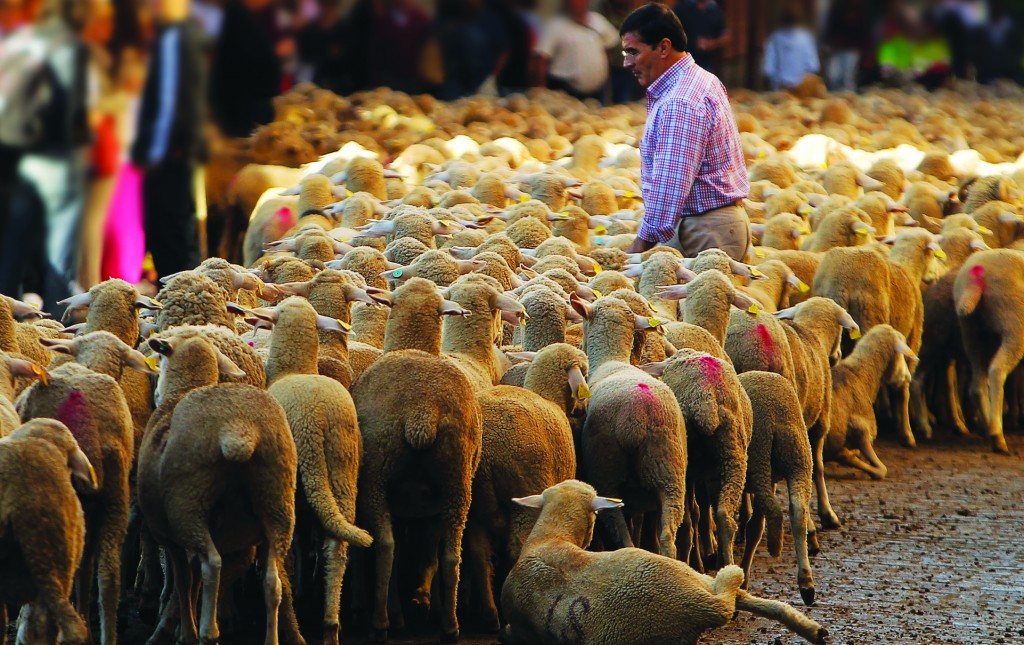 Tourists were surprised to see downtown traffic cut to permit the ovine parade to bleat — bells clanking — across some of Madrid’s most upmarket urban settings.

Since at least 1273, shepherds have had the right to use droving routes that wind across land that was once open fields and woodland before Madrid mushroomed to the great metropolis it is today.

Every year, a handful of shepherds defend that right in Spain’s capital city. Following an age-old tradition, they paid 25 maravedis — coins first minted in the 11th century — to city hall officials to use the crossing.

Shepherds have a right to use around 78,000 miles of ancient paths for seasonal livestock migrations from cool highland pastures in summer to warmer and more protected lowland grazing in winter.

The movement is called transhumance and in Spain up until recently involved close to one million animals a year, mostly sheep and cattle.

Modern farming practices and the use of faster road transport are increasingly confining animals to barns or trucks, because shepherding is costly and time-consuming, according to the Ministry of Agriculture, which has promoted the colorful annual Transhumance Fiesta in Madrid since 1994.

Spaniards are proud of their centuries-old sheep rearing traditions and hold the native Merino breed of sheep in high esteem.

Merinos have gone on to form the backbone of important wool industries in places such as Australia and South America.

Pieces of Old Carpet From Legislature Up for Sale

LANSING, Mich. (AP) – The state is holding an old-carpet sale after spending roughly $370,000 on a renovation of the state’s House and Senate chambers.

The Detroit Free Press reports that the old carpet, which was held together by duct tape in spots, has been cut into small squares.

The carpets have unique designs. So far, about 170 people have asked for pieces of the Senate carpeting. In the House, there was a lottery for the pieces that included the state’s coat of arms, which sold for $100 each. Another 50 sold for $25 each.

HAMPTON, N.Y. (AP) – Police in a rural upstate New York town are looking for a 70-foot-long mobile home that was stolen from a diner’s parking lot.

The Washington County sheriff’s office tells The Post-Star of Glens Falls that the mobile home had been placed on a trailer that was parked at a diner in the town of Hampton awaiting delivery to neighboring Vermont.

Investigators say the owner had to have emergency surgery and when he came back to Hampton a few weeks later, the trailer with the $50,000 mobile home was gone.

Police say someone apparently hitched a truck to the trailer and towed it away late on the afternoon of Sept. 23, when a witness reported seeing it headed toward Vermont.

KELSO, Wash. (AP) – A woman in Washington state brought her child’s birthday cake into a courthouse, thinking that would be safer than leaving it in the car with her dog. She realized her error when a stranger grabbed and ate handfuls of the cake.

The chocolate cake passed through a metal detector and was sitting on a table when it was attacked.

Cake and frosting went flying when a Cowlitz County sheriff’s deputy grabbed the cake harasser and took him to the ground. The Daily News of Longview says more deputies rushed to help, only to end up smeared with frosting.

Deputy Joe Connor told KATU that 50-year-old Robert Fredrickson was arrested for investigation of third-degree theft. The Daily News says the man had been on his way to a court appearance.

A local grocery offered to replace the cake.

DOTHAN, Ala. (AP) – Angela Dalton and her 10-year-old son were riding as passengers in a three-seat plane for an aerial tour of Dothan, courtesy of a family friend who happens to be a pilot.

When the plane neared Dalton’s Dothan neighborhood, she lifted her smartphone to snap a photo.

“I was trying to zoom it on my phone, and the wind just caught it and ripped it out of my hand,” Dalton said.

A panicked Dalton watched as the phone spiraled away, soaring down an estimated 1,400 feet toward the city.

“All that kept going through my head was, ‘I hope I don’t get home and it’s all over the news that I knocked somebody out or somebody got killed or it hit a windshield and caused a car accident,’” she said.

Resigned to the fact that her beloved phone had been decimated, she nevertheless called her number when she got home.

To her surprise, the phone rang but no one answered. Still, she and her husband suspended the account and, after being told the drop wasn’t covered by the phone’s warranty, thought the situation to be over.

Days later, Eric Hall left his house to check the mail when he noticed an orange cellphone sitting in his yard about six feet from the curb.

“My neighbor was out here, and I thought it might have been his daughter’s phone,” Hall said.

After realizing that wasn’t the case, Hall charged the phone and called the last number the phone had dialed — Bill Smith, the pilot of the airplane from which the phone had fallen.

“I said, ‘Hey, I found this phone.’ He paused and then said, ‘You’re kidding me,’” Hall said. “He asked what it looked like, and I said, ‘It looks great, like somebody dropped it out of their pocket while walking.’

Not only had the phone survived the fall, it was in pristine condition, even after a weekend storm.

The phone is now back in Dalton’s possession, but the story got even stranger when Hall told Dalton his job title — air traffic controller.