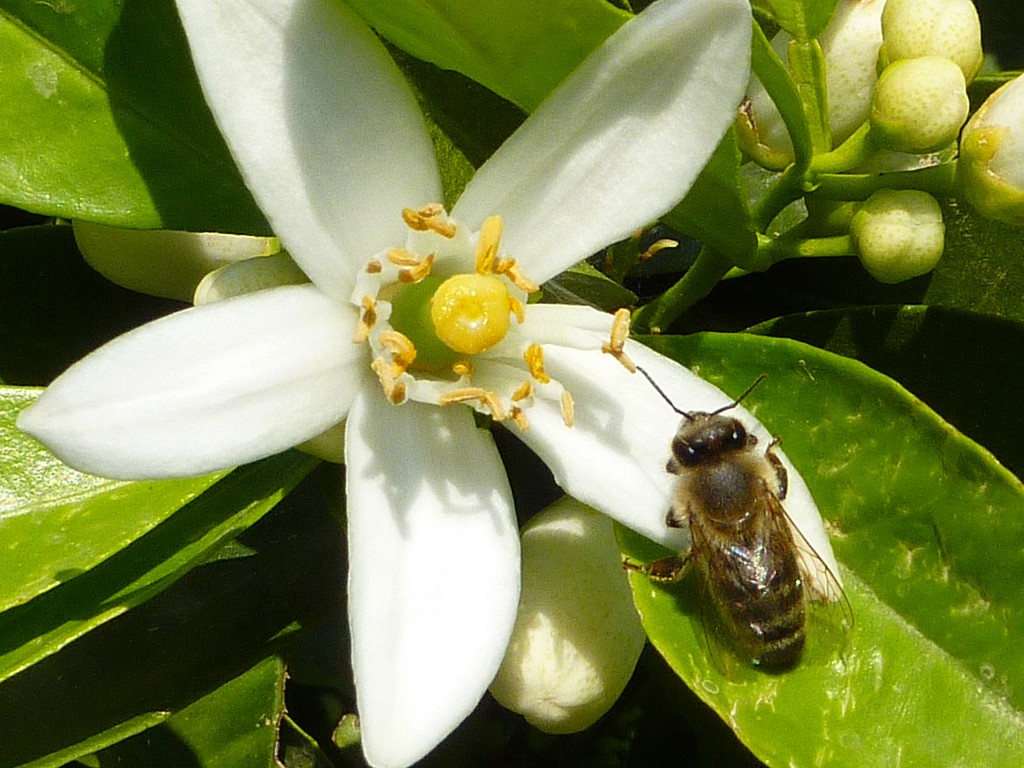 Caffeine Shot in Nectar: For Bee Memory, Not Buzz

NEW YORK (AP) – Talk about a caffeine buzz: A new study says honeybees get a shot of caffeine from certain flowers, and it perks up their memory.

That spurs them to return to the same type of plant, boosting its prospects for pollination and the future of the plant species.

Maybe it shouldn’t be a surprise that one of the flowers is the coffee plant. Its nectar offers about as much caffeine concentration as a cup of instant coffee, according to researchers.

But some citrus plants serve caffeine too, albeit in lower concentrations. It’s found in the nectar of orange and grapefruit blossoms.

The caffeine helps a bee remember that the flower’s scent promises a tasty payoff, the researchers said. So the bee will seek out those flowers, transferring their pollen.

How could researchers tell the caffeine boosts a bee’s memory? In an experiment that used lab tools instead of flowers, they trained individual bees to expect a sugary drink when they smelled a certain floral scent. Some bees got nectar-like concentrations of caffeine in their drink; others didn’t.

Then after a day or more, they exposed the insects to the same scent and watched to see if they extended their feeding tubes in response, a sign they were ready to sip. After 24 hours, the bees that had gotten caffeine were three times as likely to remember as bees that hadn’t. After 72 hours, they were twice as likely.

Gene Robinson, a bee biologist at the University of Illinois who didn’t participate in the study, said it provides strong evidence that coffee and citrus plants use the caffeine strategy. Now the question is how many plants might use this trick, he said in an email. After all, bees pollinate thousands of species.

Wright said that other plants are now under study, but that only about 100 species can make caffeine.

Young Tree Left at Tiny Park Where One Was Stolen

PORTLAND, Or. (AP) – Portland parks officials say a Douglas Fir sapling resembling one stolen from a tiny Portland park has appeared at the two-foot-diameter oasis.

The theft had captured the city’s attention. Park staffers planted a replacement sapling to fill the hole left in the center of the park.

Parks officials say a passing driver posted a comment noting that a young tree, roots and all, was lying on its side beside the replacement tree. The unidentified driver speculated that perhaps the “arborious criminal was feeling remorse.”

Parks Director Mike Abbate says if the latest tree is healthy, it will be planted in another city park.

Even if the thief returned the tree, Sgt. Pete Simpson says police will continue their investigation. In his words, “Remorse does not mean ‘case closed.’”

The tiny park lies in a median strip in downtown Portland near the Willamette River. It was established by newspaper columnist Dick Fagan in the 1940s and became an official city park in 1976.

PORTLAND, Maine (AP) – A young seal wandered up a steep embankment and crossed four lanes of traffic to make an unexpected appearance at the entrance of Mercy Hospital.

Mike Therrian was out shoveling snow when he saw what he thought could have been a person bundled under a blanket at about 4 a.m. To his surprise, it was a 30-inch gray seal.

But Therrian and a co-worker from Seabreeze Property Service took matters into their own hands, encouraging the seal to move on before the arrival of seal expert Lynda Doughty.

“We were calling it like a dog: ‘C’mon, c’mon.’ Oddly enough, it came to us,” said Kevin Freeman, who took several photographs of the wayward seal.

With some coaxing, the seal slid down the hill, crossed the Fore River Parkway and crawled back into the river that empties into Portland Harbor.

The seal was a youngster who’d just left her mother, said Doughty, executive director of Marine Mammals of Maine. The seals sometimes crawl onto land to take a rest or to regulate their body temperature, she said.

Therrian and Freeman said they decided to encourage the seal to get back into the water after they had trouble raising anyone at the early hour. The distance from the hospital to shore was about 150 to 200 yards, and they tossed snow over sidewalks to make a path.

It was high tide and the seal knew what to do. “She got down there on the rocks, she got her nose in the water, and she just took right off,” Freeman said.

BEVERLY, Mass. (AP) – Fred Butler was married for 65 years, raised five children, served in the Army during World War II and worked for years for the local water department, but the fact he never earned a high school diploma always bothered him.

The 106-year-old was awarded his honorary diploma during an emotional ceremony attended by school officials, state lawmakers and Beverly Mayor Bill Scanlon.

“I thank everybody who is responsible for this,” he said, wearing a mortar board hat and tassel and holding the prized document in his hands. “I certainly appreciate it.”

Butler dropped out of school before the ninth-grade to accept a full-time job at a print shop to support his mother and five younger siblings.

Daughter-in-law Cathy Butler says he regretted dropping out and always emphasized the importance of education to his children and grandchildren.