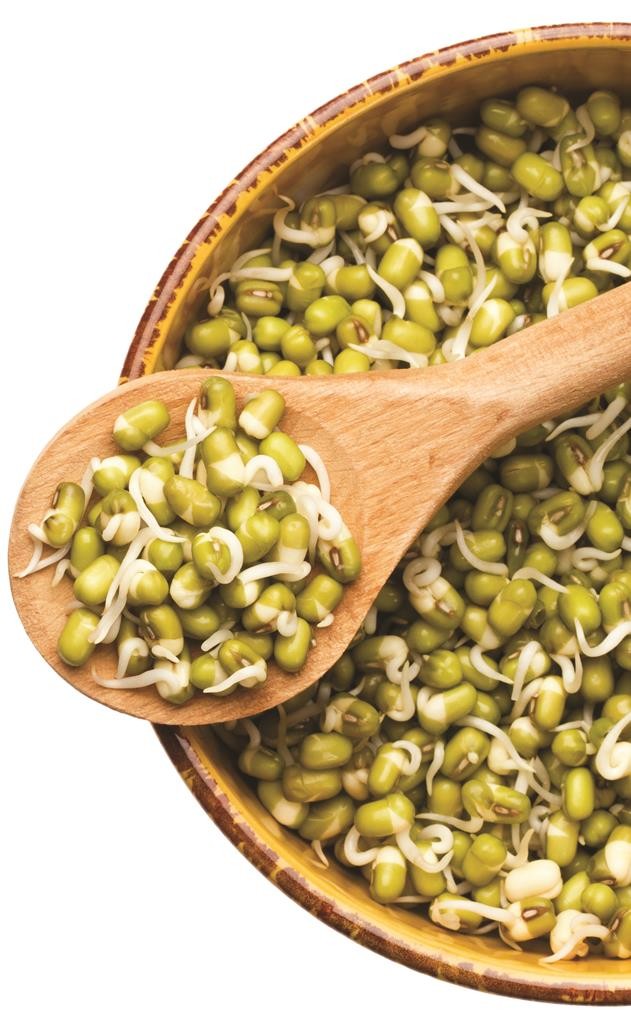 Have you ever truly thought about the beans whose sprouts garnish your typical takeout Asian food? Until dinner last week, I hadn’t. But on that night, one of my boys wondered which bean makes the bean sprouts in his takeout pho [Asian noodle soup]. Was it a black bean, a white bean or a kidney bean?

Actually, none of the above. An average bean sprout is from the mung bean. Although I have stocked mung beans in my pantry for years, I haven’t cooked them often enough that my son had any recollection of their taste or whether he is a fan. He was curious, and we had time, so we decided to experiment.

Our results: We discovered that good things come in small packages.

Mung beans are little green machines. They are very easy to digest, so they’re a perfect post-illness food. They are a dieter’s dream because they are low in calories and high in fiber. Mung beans are a safe bet for diabetics because they have a low glycemic load and help to regulate blood sugar. And despite their teeny size, the mighty mung is loaded with nutrients such as folic acid, potassium, magnesium, zinc and vitamins A, C, D, E, K and the Bs.

Mung beans pair well with coconut milk or coconut rice and Indian spices such as curries, cumin, coriander and turmeric. And the best part is they cook in a jiffy, or at least a lot faster than most dried beans, which can take hours.

Our first experiment was a simple mung bean soup. We sautéed chopped onion, garlic and cumin in coconut oil; added mung beans and water; cooked for 40 minutes; mixed in coconut milk, spinach and sea salt; then served with rice. This soup came at a perfect time because we needed a break from the lentil. My kids love lentil soup, so it had become a go-to weeknight dinner that I went to way too many times this year.

We boiled another batch of mung beans to sprinkle on our salads and found that they add a nutty flavor. My favorite mung bean meal was a bowl of cooked beans tossed with chopped vegetables, a tangy vinaigrette and some feta cheese. They made easy bean burgers and gave a fresh spin to rice and beans. We puréed the remaining cup of our batch of beans into a hummus that proved to be an enormous hit with everybody in the family.

Who knew a trip to the neighborhood pho place would lead to a week of kitchen experiments and healthful vegetarian eating? I never would have guessed. Yet it did, and we have officially declared ourselves fans of the mighty mung.