The Kvetch of Allegiance 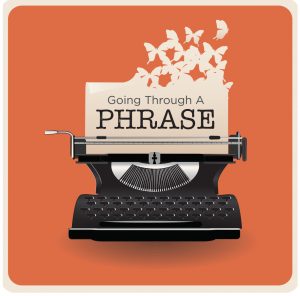 My daughter-in-law Ariella is a writer. She just published her second novel and she works as an editor and proofreader. Somehow, bless her, she also finds time for her family.

One day, Ariella told her 2 1/2-year-old son (my grandson Yaakov Chaim, aka Yankel), “I need a few minutes of quiet.”

Yankel countered, “But I need to kvetch.”

I should tell you that there was another account of this dialogue, or what I would term a dialectic (“the art of rigorously logical argumentation” — Garner’s Modern English Usage).

According to the alternate version, Yankel said “kretch,” not “kvetch.” There are several ways to interpret this articulation. The most simplistic is to dismiss it as a toddler’s mispronunciation. A converse reductionist view would dismiss it as an adult’s misinterpreting Yankel’s response.

I prefer to think of it as a neologism. Yankel coined a compound word, blending kvetch — to complain or whine; also, stress or emphasize — with krechtz — to groan. A related word is kvitch — scream or shriek.

Kvetch originates from the Yiddish word for press or squeeze, as in kvetching the last drop from a wedge of lemon before dropping the limp peel into your tea.

My brother Rabbi Nota Schiller, dean of Ohr Somayach, likes to tell the story of a little Jew who happens upon two muscle-bound fellows in the middle of a match to see who can squeeze more juice out of an orange. One of the combatants decides to have some fun and challenges the little Jew, handing him an orange and a glass.

The Jew looks at the orange and says, “Let me have the orange you just squeezed.”

Puzzled, but curious, the fellow hands him the squished orange. The Jew squeezes it, filling up the glass until it overflows.

Michael Wex — a wizard of oys — has made an in-depth study of the history and lexicography of kvetching. He posits that kvetching is built into the national character of the Yiddish language. According to Wex, by its very nature, Yiddish is the language of exile. Therefore, by definition, life is not as it should be. Following this uniquely Jewish syllogism, the conclusion is that even if something seems to be good, it really isn’t.

You might call it the kvetch of allegiance. On the other hand, Yiddish and its discontents do have their own ironic pleasures. Wex tells the well-worn story of an old man on a train kvetching, “Oy, am I thirsty! … Oy am I thirsty.”

Finally, another passenger — either out of mercy or seeking relief from the kvetching — brings the man a glass of water. Then he settles down to try and get some sleep.

But then, as the old man finishes the water, he begins kvetching anew, “Oy, was I thirsty! …”

At the opposite end of the contentment spectrum you find the mindset of the chassidic master, the Rebbe Reb Zusha of Anipoli, zy”a. Perhaps the most famous story of Reb Zusha begins with a question posed to his master, the Maggid of Mezritch, zy”a. A Chassid was confounded by the Talmudic dictum, “A man is obligated to utter a benediction for the bad even as he utters one for the good [tidings]” (Brachos 54a).

“How is it humanly possible to thank G-d for misery and suffering?” asked the Chassid.

So the Chassid went to see Reb Zusha, who lived in devastating poverty, in addition to suffering physical ailments.

The Chassid told Reb Zusha that the Maggid sent him to ask: “How can you possibly bless G-d for the bad just as you bless Him for the good?”

Reb Zusha looked at the man in utter bewilderment. “I can’t understand why the Rebbe told you to ask me. Why me? How would I know such a thing? Nothing bad ever happened to me!”

Somewhere along the spectrum between Reb Zusha’s Divine dismissal of discontent and the primal kvetch … is the attitude of my wife’s grandmother, may she rest in peace.

Bubby came to America in 1920, when she was around 20. The difficulties she endured those first 20 years were perhaps only exceeded by the tsuris of most of the decades that followed. She lived out her last years in Yerushalayim, fulfilling a childhood dream. During her final year, when Bubby was 95, one day I greeted her, “How are you doing, Bubby?”