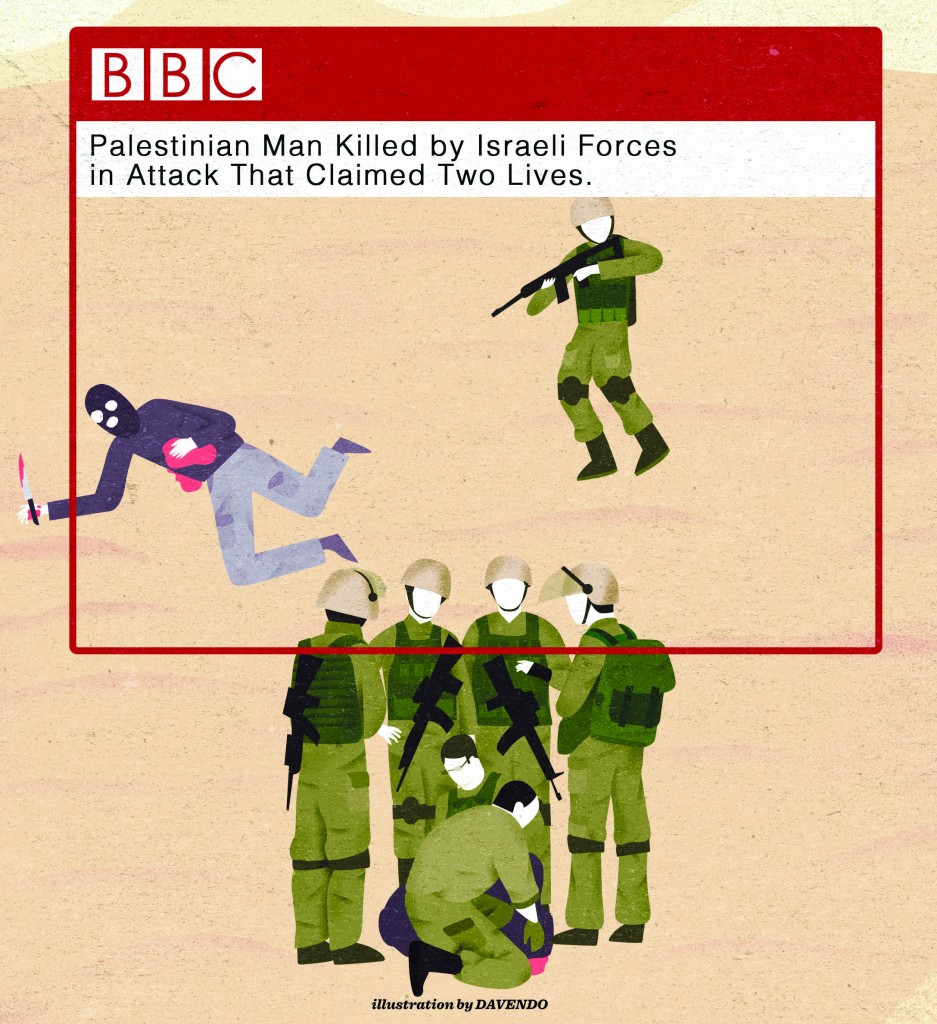 The BBC has come under fire again for its Israel coverage after a Palestinian terrorist stabbed two Israeli civilians to death and was then shot by security services. The BBC headlined: “Palestinian Shot Dead After Jerusalem Attack Kills Two.” According to its own rules, the BBC uses “plain, simple language” because “it is preferable to more complex or emotive language.” But taken to the extreme, this principle leads to headlines sanitized to the point where it becomes impossible to tell who is victim and who is perpetrator. In fact, the headline reads as if the incidents were unrelated and the Palestinian another victim, shot after two Israeli civilians had been killed in an attack in Jerusalem.

The BBC later corrected the headline, but the second version was hardly more favorable: “Israelis Killed in Old City ‘by Palestinian.’” Now that they had linked the Palestinian’s death to his attack on the two unarmed Israelis, the BBC no longer felt comfortable to state his identity without using quotation marks. They finally settled for: “Israelis Killed in Jerusalem, Palestinians Banned From Old City,” dropping the death of the Palestinian completely and no longer specifying who was behind the brutal murders.

The BBC never apologized, unlike Al-Jazeera English, whose coverage also attracted criticism. They changed the headline of a tweet from “Palestinian Shot Dead After Fatal Stabbing in Jerusalem; 2 Israeli Victims Also Killed” to “Two Israelis Killed in Stabbing Attack; Palestinian Suspect Shot Dead.” The editor later released a note acknowledging the inaccuracy: “Many people in our audience have pointed out that the tweet appears to minimize the killings of the Israeli victims and leaves out the context that the Palestinian man was their attacker. This criticism is valid and we regret the wording of a tweet written under the pressure of breaking news.”

Yiftah Curiel, a spokesperson at the Israeli embassy in London, told Hamodia that the BBC’s initial headline was “outrageous” and the coverage of the attack “disappointing.” He also lamented the failure to report the “widespread incitement by Palestinian leaders, which no doubt contributed to the spree of attacks in the last few days.”

The list of similar incidents is long. The BBC’s coverage reached a new low point this year with the reporting of the Porte de Vincennes siege in Paris in the aftermath of the Charlie Hebdo shooting. The blood of the victims had barely been wiped off the floor of the kosher supermarket, when the BBC’s Tom Willcox interviewed the evidently shaken daughter of a Polish Holocaust survivor at a vigil.

“The situation is going back to the days of the 1930s in Europe,” the woman told Willcox. He responded: “Palestinians suffer hugely at Jewish hands as well.” She shook her head in disbelief, to which Willcox replied: “You understand everything is seen from different perspectives.”

The video, published online by the UK-based Campaign Against Anti-Semitism, caused a public outcry. Not only had Willcox failed to make a distinction between Israelis and Jews, he had also shifted the blame of the horrendous attack onto the victims. Put bluntly: They had it coming.

He later apologized under intense media pressure, stating that his “poorly phrased question,” which really was a statement, had been the product of a live interview during which you sometimes say things that you later come to regret. “The BBC rejected all complaints on the issue which we believe was one of obvious anti-Semitism,” Jonathan Sacerdoti, director of communications at the Campaign Against Anti-Semitism, told Hamodia.

Is the BBC institutionally biased against Israel and the Jewish people?

The Jewish community seems to think so. In a poll carried out by the Institute for Jewish Policy Research in 2013, 36 percent of British Jews said that the broadcaster was “heavily biased” against Israel, while 43 percent felt it was “somewhat biased.” Only 14 percent described the BBC’s coverage as “balanced” and only 3 percent thought the broadcaster favors Israel. It is hard to dismiss such a clear-cut majority as paranoid conspiracy theorists.

A survey conducted by the Campaign Against Anti-Semitism in early 2015 confirms those findings: A polling of over 2,000 Jewish Britons revealed that 82 percent believe that media bias against Israel fuels persecution of Jews in Britain. Seventy-seven percent say they have witnessed anti-Semitism that was disguised as a political comment about Israel.

There appear to be different levels of biases, intentional and unintentional, ranging from genuine human errors under intense 24/7 breaking news pressures to deliberate distortions of the truth. In 2006, following an investigation into the BBC’s Israel-Palestine coverage, the BBC journalists’ guide to facts and terminology was made public. This states that the public-service broadcaster has the responsibility “to remain impartial and report in ways that enable its audiences to make their own assessments.” The documentary “Children of the Gaza War,” broadcast by the BBC in July 2015, was in clear breach of these guidelines. In one interview, a Gazan child says the “Yahud” are massacring Palestinians. “Yahud” is the Arabic word for Jews and yet the BBC translated it as “Israelis.” Lyse Doucet, the journalist behind the documentary, later defended the decision as follows: “We talked to people in Gaza, we talked to translators. When [the children] say ‘Jews,’ they mean ‘Israelis.’ We felt it was a better translation of it.” This was not a piece of impartial reporting. The journalist forced her own interpretation on the audience and whitewashed the widespread and deep-rooted anti-Semitism with which children in Gaza grow up from a very young age.

Moreover, different BBC programs seem to suffer from bias in various degrees. Standard hourly news programs are generally balanced compared to breaking news reporting from war zones and feature stories by journalists with anti-Israel bias. This is also true for different BBC channels. The English version has a better record of fair reporting on Israel than BBC Arabic, a phenomenon also found among other international news outlets.

The BBC clearly struggles to report fairly on Israel, but the bias manifests itself more in the reporting of particular journalists, programs and channels, rather than across the entire institution. The BBC employs over 20,000 people and many of them are just trying to do a good job. It confirms what a source, who worked at the BBC during the latest Gaza escalation, told Hamodia: “I was asked to ask someone living in both Gaza and Israel to comment on the ongoing situation at the time and I felt the producer I was working with (I was on the BBC World Service) was trying as hard as he could to make sure the reporting was balanced and took in both sides.” He acknowledged that some of the people he worked with said “firing rockets was self-defense” but thought “that was purely their own opinion” and did not affect their work.

The BBC leadership, however, can be accused of having a very poor record of correcting inaccuracies in its reporting. “We continually hear from many British Jews that they think the BBC is guilty of having a bias. The BBC’s own handling of these concerns does nothing to calm their concerns,” according to Jonathan Sacerdoti from the Campaign Against Anti-Semitism.

On the contrary, the BBC has taken steps to cover up shortcomings. The Balen report examined the BBC’s coverage of the Israeli-Palestinian conflict following allegations of bias. Malcolm Balen’s findings were circulated at the end of 2004 among a highly restricted group of senior management, and when efforts were made through a Freedom of Information Act to make the document available to the public, the BBC spent $460,000 on legal fees to keep it secret. According to sources with access to the report, Balen’s findings were a damning account of the BBC’s biased coverage on Israel.

David Hirsh, a lecturer at Goldsmiths, University of London, believes these findings must be put in the wider context. He told Hamodia: “In general, the BBC reflects the intellectual and political milieu from which it draws its staff and in which its staff continues to live. On top of that, it tends to create a bit of a culture of its own. Its people tend to think of the institution and of themselves individually as being among the good people. In England, being a good person brings with it quite a lot of baggage regarding the Israel-Palestine conflict. So no conspiracy — no homogeneity — but a reflection of what is wrong in general about the British chattering classes.”

The Israel-Palestine conflict remains one of the most contested issues of our time, and it should thus come as no surprise that the BBC receives a disproportionately high number of complaints relating to the subject, with both sides purporting to hold the ultimate truth.

The relationship between the BBC and its coverage on Israel is not straightforward. The social media revolution has transformed the media landscape. No one can deny the intense pressure people working on the edge of 24/7 news find themselves under. Genuine mistakes are being made and not all inaccuracies are grounded in malicious bias or dogmatic ideology. But it does not take away the fact that the BBC struggles with its reporting on Israel, is reluctant to admit and correct mistakes and gives disproportionate attention to Israel’s conflict with the Palestinians. The BBC’s coverage is a symptom and a symbol of a much larger problem: it reflects a society in which Israel is increasingly seen as uniquely malignant — a mighty military power that crushes its defenseless victims — and deserves everything it gets in return. Understanding this phenomenon makes it easier to explain why one of the most prestigious public-service broadcasters in the world cannot get a simple headline right.