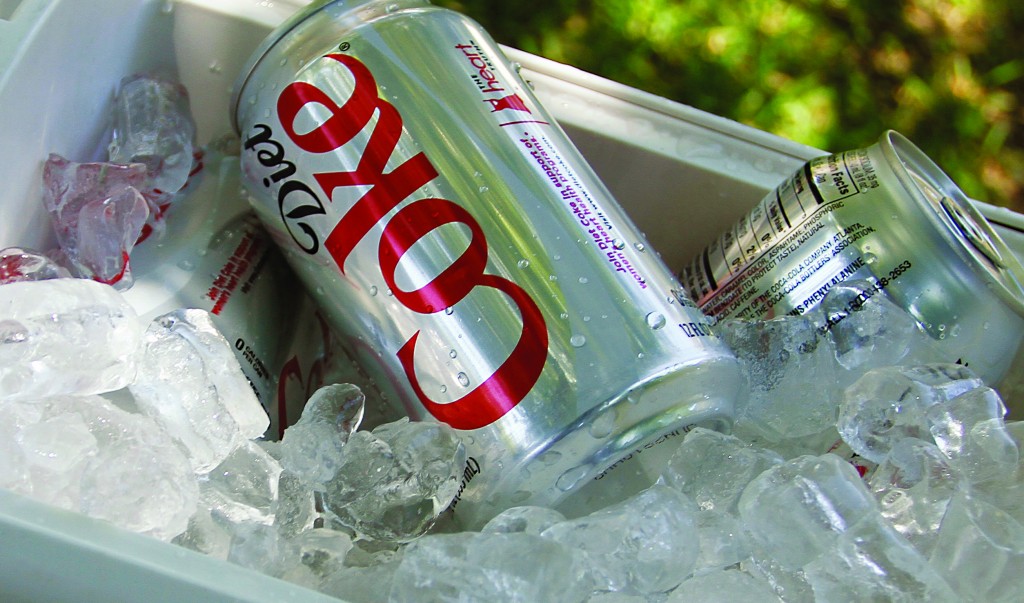 Overweight adults who use diet drinks to help them lose weight should take another look at the food they eat, according to researchers who reported Thursday that those people ate more food calories than overweight people who drank sugar-sweetened beverages.

The scientists writing in the American Journal of Public Health did not say the dieters should give up on no- and low-calorie drinks; rather, they said the dieters should look at what else they’re consuming, especially sweet snacks, to find other ways to modify their diets.

“Although overweight and obese adults who drink diet soda eat a comparable amount of total calories as heavier adults who drink sugary beverages, they consume significantly more calories from solid food at both meals and snacks,” Sara Bleich, lead author of the study, said in a statement. Bleich is an associate professor in the Bloomberg School health policy and management department at Johns Hopkins University.

She and her colleagues used data about people age 20 and older from the 1999–2010 National Health and Nutrition Examination Survey.

The issue is important because the consumption of diet beverages has increased from 3 percent of adults in 1965 to 20 percent today, and the beverage industry has said it is responding to the obesity epidemic in part by producing more low- and no-calorie choices for consumers. A common weight-management strategy is to switch from sugar-sweetened drinks to low- or no-calorie drinks.

The study, published Thursday, says the evidence from long-term studies is mixed. It also showed that total caloric intake among adults who drank sugar-sweetened beverages was higher than among those who drank diet beverages. But it said that difference in calories was significant only for adults at healthy weights.

Among those diet-beverage drinkers, the consumption of food calories went up with each body-weight category, the researchers said.

They said that about 1 in 5 overweight or obese people drinks diet beverages. That’s about twice the average among healthy-weight adults.

“It was interesting that diet-beverage consumption appeared to be protective for adults at a healthy weight,” the researchers said, adding that those people ate 73 fewer calories from food on a typical day. Overweight and obese people who drank diet beverages ate 88 and 194 calories more, respectively, the study said.

The researchers noted that their study relied on single 24-hour dietary recalls, which could mean unreliable or underreported results.

The American Beverage Association, a trade group, responded to the study with a statement noting that diet beverages have been shown to be effective in weight management.

“Numerous studies have repeatedly demonstrated the benefits of diet beverages — as well as low-calorie sweeteners, which are in thousands of foods and beverages — in helping to reduce calorie intake. Losing or maintaining weight comes down to balancing the total calories consumed with those burned through physical activity,” the statement said.

The association cited several studies about diet drinks and weight loss, including one that suggested the difficulty of determining any causality. The study authors also said they can only address associations, not causes.