So What Do You Taynah? 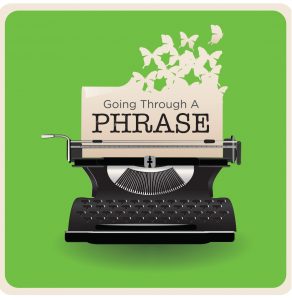 Taynah is Hebrew for claim. In Yiddish, from the Hebrew, it means complain, argue or plead. Now, considering the fact that you may not be claiming anything; nor complaining (thank G-d), nor pleading anything — what on earth did I mean?

I should tell you that I wasn’t actually writing in Hebrew or Yiddish. (And I don’t mean the alphabet.) I was writing in Yeshivish — a mixed language of Hebrew, Aramaic, Yiddish and English.

Yes, yes, I know. Yeshivish is not really a language. Chap nisht (literally, don’t grab — the Yiddish equivalent of don’t jump the gun). We’ll get to that later.

Writing in The Jerusalem Post, David Sarna was irked by an email that came his way from someone “organizing a ‘habura,’ by which he meant a group for Talmud study.”

That was Exhibit A. Exhibit B was a posting “on intellectual property, styling it ‘Mini Haburah: Intellectual Property: Nehneh and Shutfus.’”

Why was he so irked? Because, he said, “Habura … means ‘wound.’ What both meant was ‘havura.’”

He then asked, “Why did these erudite shul members transliterate [the word] as ‘habura’ instead of ‘havura,’ adding an unwanted dagesh [dot]?” Then he made a point of the missing dot:

“The distinction amounts to a mere dot. As Hillary Rodham Clinton said in her testimony on ­Benghazi, ‘What difference does it make?’ To the Talmud, it makes a world of difference.”

Then he found out the writers weren’t writing in Hebrew. He “was informed that it was ‘Yeshivish.’”

Mr. Sarna would really go dotty over an exchange of emails I had with my eminent colleague Rabbi Dovid Schwartz. Rabbi Schwartz was proofreading an article I had edited and he questioned a transliteration:

The article said, “Today, when there are no korbanos, the Pesikta d’Rav Kahana tells us, ‘u’neshalmah parim sefaseinu.” (Since we are unable to offer sacrifices, we substitute our prayers.)

Rabbi Schwartz looked up the verse (Hoshea 14:3) and, lo and behold, there’s no dot in the letter that would have rendered the word parim. Thus the correct reading should be “u’neshalmah farim sefaseinu” — pronouncing the word as farim, with a soft feih, rather than a hard peih.

I shot back from the hip: “Over my head. Popular pronunciation vs. precision. Bottom line: How are you going to keep them down on the farim once they’ve heard Parim?”

(If you’re too young to get that, ask me after class.)

Dovid Katz, a Brooklyn-born Yiddish scholar who relocated to ­Vilnius, wrote Words on Fire: The Unfinished Story of ­Yiddish. Unfinished, because even though Katz isn’t ­Orthodox, he views the Yiddish spoken by Chassidim and in yeshivos as the great hope for the future of a language prematurely declared dead. He observed, “A new dialect of English, sometimes called Yeshivish, is taking over as the vernacular in everyday life in some circles in America and elsewhere.”

Katz cited Frumspeak: The First Dictionary of Yeshivish, by Chaim Weiser. While Yeshivish draws on Hebrew, Aramaic, Yiddish and English, much of the English is a literal translation of Yiddish or Talmudic phrases. Yeshivish, according to Weiser, might be considered a linguistic descendant of Talmudic Aramaic. It is an outgrowth of the recognition that the most important goal in life is to learn and understand Torah. “Certainly, the goal of ensuring the successful transmission of ageless Torah outweighs any perceived advantage of maintaining the purity and integrity of a particular language.”

It is a greeting in Yeshivish that presumes (a) you are most probably thinking about a Talmudic issue (what else would you be thinking about?) and (b) you likely have some analysis or insight to discuss.

To illustrate the unique qualities of the lexicon, Weiser offers some classic English works with translations into Yeshivish. For example, The Pledge of Allegiance:

“I pledge allegiance to the flag of the United States of America, and to the republic for which it stands, one nation under G-d, indivisible, with liberty and justice for all.”

Yeshivish Translation [with some annotation]:

“I am meshabed [I obligate] myself, b’li neder [G-d willing], to hold shtark [be loyal] to the siman [symbol] of the United States of America and to the medina [nation state] which is gufa [ultimately] its tachlis [purpose]; one festa chevra [tightly knit band], b’ezras Hashem [with the help of G-d], echad ve’yuchid [united as one], with simcha [joy] and erlichkeit [goodness] for the gantza oilam [all of us].”

“It’s descriptive and precise, punkt the language to be used,

If you want to shteig in learnin’ or just to chap a shmooze.

Why without it the Gemora, would lechoira make no sense!

So listen close yeshiva guys, it’s the shtoty thing to do

Be marbitz this great language to all our fellow Jews.”