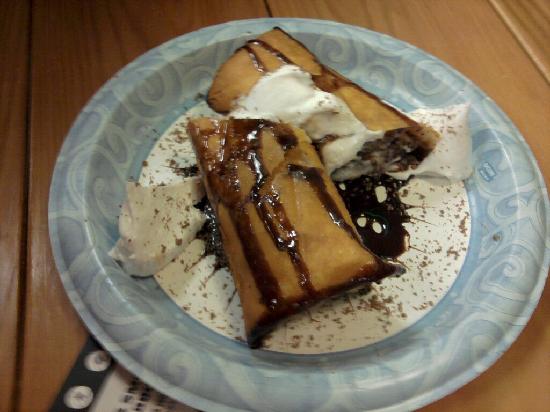 The earliest mention of a cheesecake is by an ancient Greek physician who wrote a book on the art of making them. His instructions and recipes included dishes that are remarkably similar to the cheesecakes we bake with a crust. Their customs were adapted by the conquering Romans, who also developed a taste for this ever-popular treat.

In 1872, a farmer from upstate New York accidentally came up with a fresh cheese that was heavier and creamier than any cheese available at that time. He began to sell the cheese in wrapped foil, and it eventually became the type of cream cheese that is now used most often for cheesecake.

Cheesecakes are still popular throughout the world with every culture having its own unique twist.

In the U.S. you’ll find New York-style cheesecake, which is extra creamy and relies on the addition of heavy cream.

Some styles use sour cream instead of heavy cream. This makes the cheesecake more resilient when frozen and is the method by which most frozen cheesecakes are made.

Pennsylvania Dutch cheesecakes take their traditions from European-style cheesecakes. They use a tangy type of cheese with larger curds and less water content, like farmer cheese.

In the United Kingdom and countries with ties to it, cheesecake is typically made with a base of crushed, buttered cookies and often topped with fruit compote. The filling is a mixture of cream cheese, sugar and cream and it is usually not baked, but refrigerated. Unflavored gelatin is often added to the cream mixture to keep the filling firm.

Bulgarian and other Baltic countries use cream cheese in a New York-style filling and sour cream for a top layer. Often, ground nuts are added to the crust mixture.

Greek-style cheesecake commonly uses layers of buttered phyllo dough and is filled with a cheese-egg mixture.

Cheesecakes made in South America usually have a layer of guava or berry jam on top, while Asian-style cheesecakes are lighter in flavor and texture and are much less sweet.

Preheat oven to 350 degrees F. Grease a 9” springform pan. Don’t bother with a water bath here — it doesn’t matter if it cracks.

In a medium bowl, combine cracker crumbs, sugar, and melted butter. Press firmly on the bottom and 1-inch up sides of a 9-inch spring -form pan. Bake 8 minutes.

In a large bowl, combine cream cheese and sugar. Beat with an electric mixer until fluffy. Beat in eggs, one at a time, beating well after each addition. Stir in melted chocolate.

Carefully pour batter into the prepared crust. Bake 45 minutes. Remove from oven and let cool completely on wire rack. Chill 8 hours before continuing with the recipe.

Cut the cheesecake into approximately 3” by 1” pieces.

Heat oil in a large pot to 365 degrees F on a deep-fry thermometer. Prepare a cooling rack over a sheet pan lined with paper towels.

Lightly moisten each egg-roll wrapper with the egg wash. Blot off excess egg wash with paper towels. Place each piece of cheesecake in the middle of a wrapper. Sprinkle with some chopped chocolate. Fold top of wrapper down over the cheesecake, and both sides toward the middle. Roll each piece of cheesecake toward you until it is completely rolled up. Make sure the egg roll is tightly packed with its edges sealed.

Gently place egg rolls into the oil and cook until golden brown, about 2 minutes. Using a slotted spoon, remove the egg rolls from the oil. Place each egg roll in a bowl of confectioners’ sugar and coat well.

Place deep-fried rolls of cheesecake on the rack to cool slightly before serving.