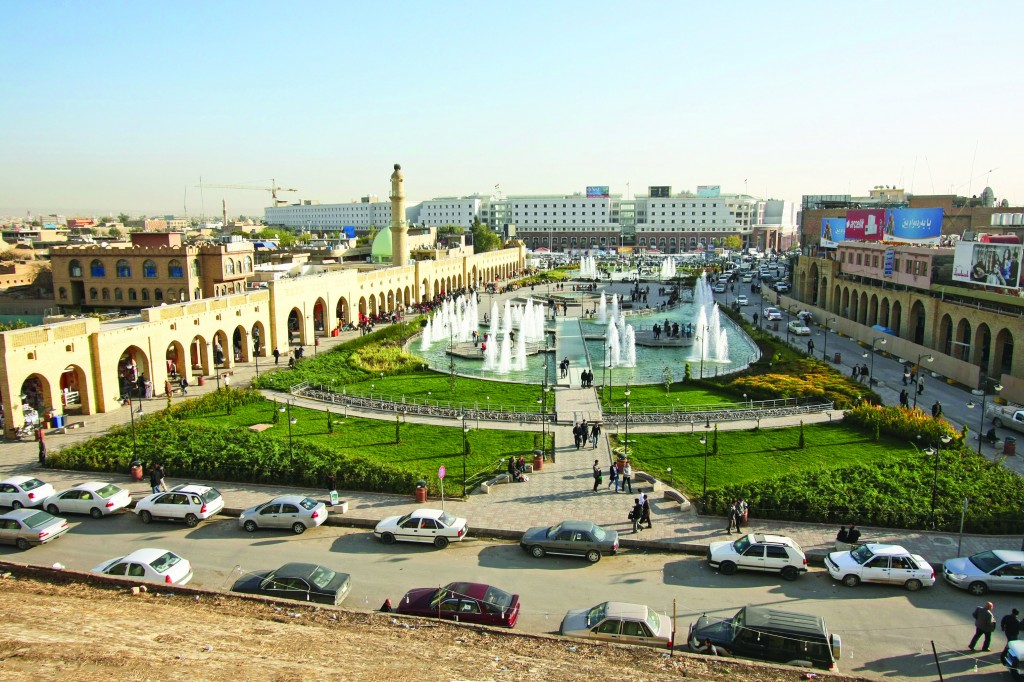 Jews and Kurds share an ancient bond. However, the vast majority of the 2,800-year-old Iraqi Jewish community was forced to flee the country in the 1940s and 1950s and make aliyah to Israel. Nationalism and religious intolerance spread in Iraq before World War II, along with Nazi propaganda. Anti-Jewish discrimination and violence reached unprecedented levels after the establishment of the state of Israel following the declaration of independence in 1948. From 1950 to 1952, a mass exodus took place: In a series of airlifts known as Operation Ezra and Nehemiah, roughly 130,000 Iraqi Jews — about three-quarters of the community — were evacuated to Israel. Those who stayed behind went underground or converted to Islam and, today, only a few hundred families with Jewish roots still live in the Kurdish region of Iraq.

Sherzad Omar Mamsani is no stranger to the cause. He has dedicated his life to sharing with others the proud history of Iraqi Jews. For many years, Mamsani was involved in an organization called Israel Kurd and published a magazine under the same name. But his activism did not come without costs. After the publication of a book on Kurdish-Jewish relations in 1997, Mamsani was attacked by local extremists and lost his arm.

Hamodia spoke with Sherzad Omar Mamsani about his plans.

Mr. Mamsani, congratulations on your appointment as Kurdistan’s first Jewish representative. KRG has authorized the Ministry of Religious Endowment and Religious Affairs to reach out to the Jewish community to foster a climate of co-existence in the autonomous region. Can you tell us more about your important mandate?

In April 2015, the parliament of the KRG, with the support of the president, approved the formation of a special unit within the Ministry of Religious Endowment and Religious Affairs dedicated to the representation of Kurdistan’s different religious communities. Previously, only Muslims, Christians and Yazidis had their own representatives, but now the Ministry has appointed officials to facilitate the interests of Jews, Baha’is, Kaka’is and Shabaks as well.

It is a great achievement for Jewish people around the world, and we, as Jewish representatives, seek to revive the history that has been stolen from us in Mesopotamia (a region roughly corresponding to modern-day Iraq, Syria and Kuwait, including areas along the Iran-Iraq and Turkey-Syria border) over the past 70 years. As representatives, we also hope to collaborate with the international community to stop violence based on religion and identity. Our main goal is to establish strong ties between Kurdistan and religions of all kinds, not just on paper but in practice. We never want to see another Holocaust; we never again want to see chemical weapons used against innocent Kurds and Jews.

Some Muslim majority countries, like the Islamic Republic of Iran, appoint Jews as a token gesture to challenge accusations of anti-Semitism. Why is your appointment more than a smokescreen for achieving political ends?

Iran is like a huge prison — its human rights abuses are well documented. As Kurdish-Jewish representatives in the KRG, we show solidarity with Jews around the world. Our duty is not political; we focus on religious affairs, but we acknowledge the threat posed by Iran and its allies and its support for terrorist organizations, like Hamas and Hizbullah, with zero tolerance for different religions and identities.

Unlike them, we see Israel and Kurdistan as the two countries in the Middle East where people of all religions and identities can come together and coexist peacefully. Religious freedom in the region is severely restricted, and nowhere in the Islamic world do religious minorities enjoy the same rights they enjoy in Israel and Kurdistan.

The KRG is seeking compensation from the central government in Baghdad for the crimes committed against Iraqi Jews. What is the history behind your claims?

Kurdistan was divided by four Islamic countries (Iran, Iraq, Syria and Turkey) and South Kurdistan was declared a part of Iraq by force. Ever since then, the Kurds have been subjected to oppression in their own land. Our homes and properties have been seized and our language, culture and religious traditions have been outlawed.

According to Article 140 of the Iraqi Constitution, steps should be taken to reverse the “Arabization” process initiated by Saddam Hussein’s regime. Large numbers of Kurds were replaced with Arabs in order to tilt the balance of power in Kurdish-majority regions. The Iraqi government so far has refused to act upon this policy, and thousands of Kurdish families are still waiting for compensation in form of land and money. This provision is not only of significance for Kurdish Muslims but other religious minorities like Yazidis, Christians and Jews.

The process has been slowed down by the fight against ISIS and Kurdish territories seized by ISIS. Fortunately, the Peshmerga [the military forces of the autonomous region of Iraqi Kurdistan] have retaken control of most of our traditional borders.

The Jewish and Kurdish communities both have been subjected to genocide. Do the two peoples share a special bond?

The Kurdish and Jewish peoples are tied together by their experience of genocide. Iran has a deep desire to erase Israel from the map; they show the same aggression against Kurdistan. Also, look at Erdogan: he supports ISIS in the North and West (Kurdish areas of Turkey and Syria) over the Kurdish people; just as he offered his support to the Hamas terrorists in Gaza.

Israel is surrounded by enemies; likewise, Kurdistan is surrounded by foes. In the Middle East there exists no stronger friendship than that between Kurds and Jews — their suffering unites them. I am not a politician, but I believe that Kurdistan cannot go without the help of Israel and that Israel has a partner in Kurdistan for its greater good. Israel can offer much in the way of friendship and support to Kurdistan, a forlorn and oppressed nation with shared values, geography and history. In return, Kurdistan can offer support for Israel’s democracy and trading economy and stand by its side in the face of our shared enemies.

Israeli Prime Minister Binyamin Netanyahu has voiced his support for an independent Kurdistan. Is the Israeli government doing all it can to support Iraq’s Kurds?

Prime Minister’s Netanyahu’s brave speech was a ray of light for the Kurdish nation. Of course we have also noticed the reaction from ­Israel’s and Kurdistan’s enemies. My hope is that more practical steps will follow his words to create a mutual alliance against terror and genocide. This is not just my own view but a sentiment shared by Kurdish politicians and intellectuals alike.

The Kurds are at the forefront in the war against the Islamic State. Is the tide turning against Islamic extremism, opening the way for stronger ties between communities of different faiths?

ISIS was not a surprise for the Kurdish people; we Kurds are familiar with Islamic extremists, who have sought to marginalize, mistreat, persecute and even kill us over the last hundred years or more. What has shocked the international community is the brutality and inhumane behavior that has accompanied ISIS’s rapid advance, and that they have gathered a lot of modern military equipment. The Peshmerga have succeeded where the U.S. and others have failed so far, taking on ISIS and pushing them back, despite a lack of military assistance to protect themselves.

The different religious communities in Kurdistan must come together as a force of unity in the fight against ISIS; especially, our Muslim brothers have a positive role to play. It [the fight against ISIS] provides Kurdistan with the opportunity to create a much stronger bond between religious communities and weaken the grip of Islamist organizations in Kurdistan. By living together in peace and harmony we are much stronger and we will break the dream of other Islamist organizations by making them look weak.

Concerns over the influx of refugees is growing among Europe’s Jewish community. Many come from countries where anti-Semitism is an integral part of their upbringing. What is your take?

In Kurdistan, we host two million Iraqi and Syrian refugees with a local population of just over 5 million. Sunni Arabs came to Kurdistan, those who murdered Kurds for years and took away their property — but it is our duty to feed them and provide them with a home, and we must work with them to reduce religious-based intolerance.

There are rich Islamic countries in the Middle East, and I ask: why are they not extending their help to other Islamic countries? They believe that Europe is the land of the unbelievers, and yet the refugees go to Europe and not to countries which share their culture and language.

We have seen what happened in France — the massacre at Charlie Hebdo and the bloodbath in the Jewish supermarket. Refugees from Islamic countries run away from the mayhem in their own lands. When they reach Europe, they first try to adapt, so they get asylum. But not all of them are law-abiding citizens, and some may eventually become radicalized, reinforcing the Jewish exodus from Europe.

We must help our neighbors, but we also have the responsibility to protect our own people. My hope is that Europe will be able to distinguish between the good and the bad refugees.

You have made it your life’s mission to strengthen Kurdish ties with Israel. What future relationship would you personally like to see between the KRG and Israel?

Both Kurds and Jews are ancient people and their history goes back thousands of years. Having a two-way relationship between the countries — political, economic, military, cultural and religious ties — can help to bring about a more stable and peaceful Middle East.

Most Kurds are Muslim, but it comes more naturally to them to live with people of other faiths in harmony, as opposed to Arab, Iranian and Turkish Muslims. But I want to build bridges between all nations in the area. Humanity will only succeed where peace and friendship endure.

You recently visited Israel. What were your impressions of the country?

I cannot describe my feelings in just a few words. I do not think any Kurds, even Muslim Kurds, who go to Israel feel they are in a foreign country.

In Yerushalayim, I smelled the scent of thousands of years of ancestry — it was like a rebirth. The culture of living freely together in peace gave me the impression of never being a stranger. I sensed that the Israelis have a deep appreciation for the Kurdish people. Everyone is equal before the law.

For me it was a huge surprise to see how a tiny state, surrounded by enemies, developed into an advanced society in just over 65 years and into a democracy that should serve as an example in the region.

For me, Israel is like a beautiful flower that grew in a dry desert. For Europeans it may sound like displaced romanticism, the tears of thousands of mothers on which our countries are based, but for Israelis and Kurds it is a symbol of the sacrifice we have given to build and rebuild our land.

In what ways can Jewish organizations or private individuals help to support your work?

We need political support, as we are at the point where Israel was when it first started its journey toward statehood. We would love to take active participation in Jewish conferences, meetings and other events around the world to discuss and exchange ideas with relevant bodies.

We, as Jewish representatives, would also appreciate the help of international organizations and individuals to show the world that Jews are no threat to people of other faiths and to challenge the ugly picture painted of Jews — for instance, by Islamic extremists.