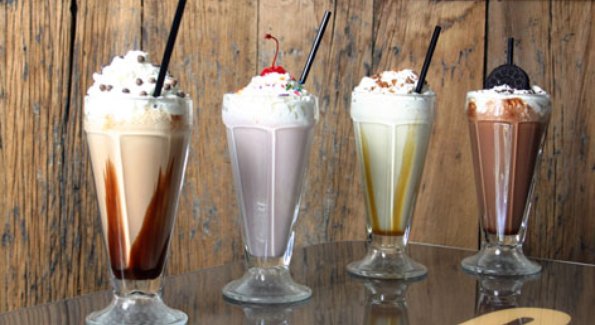 When the term “milkshake” was first used in 1885, it referred to a “health tonic” meant to cure various ailments. Milkshakes later evolved to include ice cream and, by the 1930s, they were a popular drink at drug stores and diners where kids would congregate after school.

In the 1950s, milkshakes were called “frappes,” “velvets,” or “frosted [drinks]” in different parts of the U.S. A specialty style of milkshake called the “concrete” was a milk shake so thick that the server handed it to the customer upside down, demonstrating that not a drop would drip!

In 2006, sales of milkshakes and similar iced drinks rose 11 percent in the United States. Part of the increase in milkshake sales reported may be due to the increasing availability of gourmet chef-designed milkshakes in high-end restaurants. Chefs began using things like liquor-soaked farmers market strawberries, high-end chocolate and Madagascar Bourbon vanilla to make new milkshake flavors.

Of course, milkshakes may be a treat you go out for, but you can also easily treat yourself at home if you own a traditional or immersion blender.

If you like fruit in your milkshakes you’ll want to try this recipe. Substitute roasted peaches or melon for the pineapple, if you prefer.

For the roasted pineapple:

For the Roasted Pineapple:

Put ice in the blender. Add the cooled roasted pineapple, the pineapple juice, sorbet and ice cream. Pulse until the mixture is smooth and creamy. Pour into 4 large glasses. Top each glass with a splash of soda. Serve.

All milkshakes don’t have to be calorie-laden indulgences. Try frozen low-fat yogurt.

Put everything in the blender and blend until smooth. Serves 2.

This recipe is a bit more involved but is worth the effort!

Whisk 1/2 cup heavy cream, very cold marshmallow fluff and vanilla until stiff peaks form; set aside. Combine whole milk and cup chocolate syrup in a blender. Add 3 cups chocolate ice cream; blend until smooth. Fill 4 glasses one-quarter of the way with the shake; add some marshmallow mixture, then more milkshake, then cream, then milkshake. Finish with a dollop of marshmallow cream and garnish with shaved chocolate.

This recipe is a favorite among adults and children alike.

Place all ingredients in a blender or shake maker. Cover; blend until consistency of thick milk shake, with bits of candy throughout. Pour into 2 large glasses. Serve immediately.