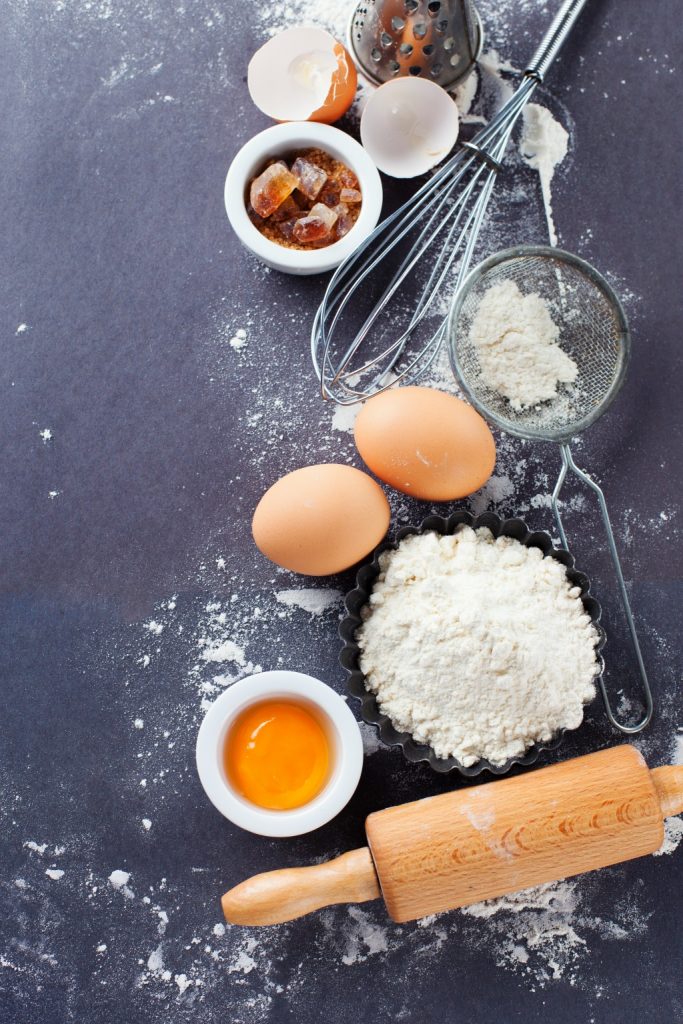 While our children are stocking up on school supplies and meeting their new teachers, we are poring over cookbooks, planning our Yom Tov menus. Learning the meaning of many culinary terms will help!

Al dente: Italian term used to describe pasta that is cooked until it offers a slight resistance when you bite it.

Bouquet garni: A little bundle of herbs, tied together or placed together in a piece of cheesecloth, used to enhance the flavor of a soup or stew. The classic combination of herbs is parsley, thyme and bay leaf.

Blanch: To immerse in rapidly boiling water and remove quickly so it cooks only slightly.

Braise: To cook food slowly in a small amount of flavorful liquid in a tightly covered pan.

Butterfly: To split food, such as chicken cutlets, through the middle without completely separating the halves. Opened flat, the split halves resemble a butterfly.

Caramelize: To heat sugar or anything containing sugar in order to turn it brown and give it deep flavor.

Clarify: To separate and remove solids from a liquid, making it clear. Usually refers to butter.

Cure: To preserve meats by drying and salting and/or smoking.

Chiffonade: In cooking, this French word, meaning “made of rags,” refers to cutting herbs into thin strips.

Deglaze: To dissolve the thin glaze of juices and brown bits left in a pan in which food has been fried, sautéed or roasted.

Dredge: To sprinkle or coat with flour or other crumbs.

Flambé: To flame foods by dousing it in liquor and setting alight.

Emulsify: To combine two liquid ingredients, such as oil and vinegar, that don’t naturally combine. Usually done by adding one ingredient to the other while whisking rapidly with a fork or wire whisk.

Fold: To add a delicate ingredient, such as whipped cream or beaten egg whites, into another substance without popping air bubbles.

Fond: The brown caramelized bits of “stuff” left in the pan after you sauté meat or fish.

Glacé: The French term for “glazed” or “frozen.” In the United States, it describes a candied food.

Gratin: Term used to describe an oven-baked dish that features a golden brown crust of crumbs.

Julienne: To cut vegetables, fruits, or cheeses into thin strips.

Meunière: Dredged with flour and sautéed in butter.

Mirepoix (mihr-PWAH): A mixture of diced carrots, onions, celery and herbs that has been sautéed in butter or oil and used to season soups and stews. Sometimes mirepoix will contain diced meat to enhance flavor.

Reduce: To boil down to reduce the volume.

Refresh: To run cold water over food that has been blanched, to stop the cooking process quickly.

Render: To make solid fat into liquid by melting it slowly.

Roux (roo): A mixture of flour and oil cooked to a golden color and used to thicken sauces and soups.

Scald: To heat food just below the boiling point.

Scallop: To bake a food in a flat dish with sauce or other liquid, usually topped with crumbs.

Steep: To allow a food to stand in water that is just below the boiling point in order to extract flavor or color.

Stock: The strained clear, flavorful liquid in which meat, poultry or fish has been simmered for a long time with vegetables or herbs.

Truss: To secure poultry with string or skewers, to hold its shape while cooking; usually done for whole duck, chicken or turkey.

Weeping: When liquid separates out of a solid food, such as pudding, custard and meringues.