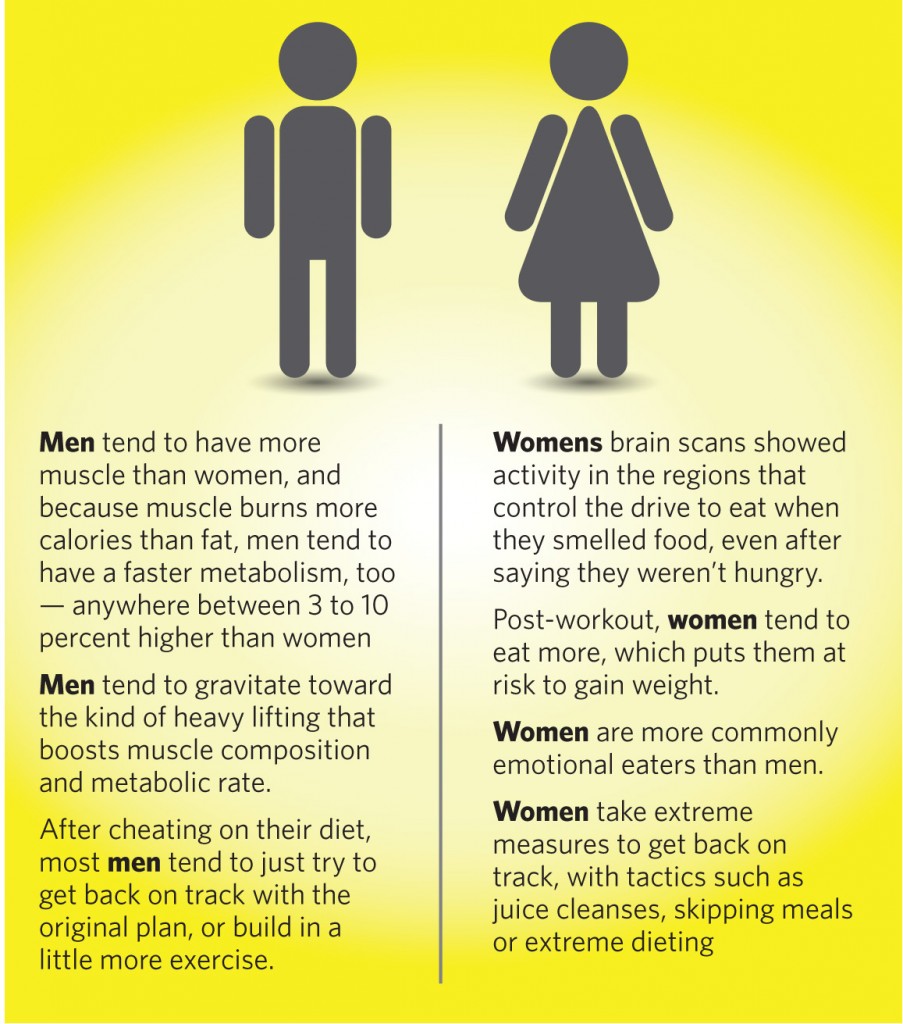 You’re not imagining it: There really are differences between the way men and women diet, lose weight and respond to exercise.

Some of the differences stem from biology; other differences are behavioral. But though many of these seem to give men a head start, they shouldn’t be taken to imply that guys have it easy. No matter who you are or where you’re starting, the road to your ideal weight is difficult at best, and confusing for most.

But the information that researchers are unearthing about the differences in the way that men and women lose weight inspires hope that the next generation of weight-loss advice will be more tailored and effective than the generic tips that have gotten Americans no closer to sliding into their dream outfits. (More than a quarter of Americans are obese, according to a May Gallup poll, a number that has been ticking upward for years.) Although experts have long insisted that losing weight is simply a matter of burning more calories than you consume, they now say that it’s much more complicated than that.

And at the gym, that difference just gets exacerbated. Women, worried about bulking up, tend to lift lighter weights and focus more on cardiovascular fitness, while men tend to gravitate toward the kind of heavy lifting that boosts muscle composition and metabolic rate, says Jim White, a Virginia Beach-based nutrition expert and certified personal trainer.

When it comes to food, there is evidence that men and women’s brains are wired differently. In a study published in the January 2009 issue of the Proceedings of the National Academy of Sciences, even though women said they weren’t hungry when asked to smell, taste and observe treats such as pizza, cinnamon buns and chocolate cake, brain scans showed activity in the regions that control the drive to eat (not the case for men).

Then, there’s biochemistry. In women, ghrelin — the “I’m hungry” hormone — spikes after a workout, while leptin — which tells the brain “I’m full!” — plummets, according to a 2009 study in the American Journal of Physiology — Regulatory, Integral and Comparable Physiology. Not so in men. So post-workout, women tend to eat more, which puts them at risk to gain weight. Men don’t experience this same hormonal fluctuation.

And then there’s the question of what drives men and women to eat: hunger for food, or some more profound craving. A 2013 study published in the American Journal of Clinical Nutrition established that women are more commonly emotional eaters than men.

And some emotional eaters, in an effort to feel better, are prone to reach for foods that will ignite the reward center of the brain, which tend to be the sugary, fatty, salty, hyper-palatable foods that can lead to weight gain, says author Pamela Peeke.

“They’re not bingeing on arugula,” says Peeke, who is an assistant professor of medicine at the University of Maryland. But a sugar high is short-lived, of course. Shame quickly floods in as food wrappers pile up.

Both men and women are prone to an all-or-nothing approach to weight loss (for example, after a binge, figuring, “Well, I blew it. I might as well go all out!”). Cynthia Sass, a registered dietitian and author, says she sees more women take extreme measures to get back on track, with tactics such as juice cleanses, skipping meals or extreme dieting — not the most sustainable methods. “Most but not all men tend to just try to get back on track with the original plan, or build in a little more exercise,” she says.

One area where women get a boost, however, is in support systems: Men tend to “go it alone,” Peeke says, which could lead them to give up in times of stress. Women are more likely to reach out to friends, family, a dietitian or a group such as Weight Watchers.

So what can we do with all this knowledge? Tempting as it is to get discouraged, we can actually find it encouraging. Biology is not destiny, after all. “Lifestyle choices are immensely powerful,” Peeke says. And on the heels of any tidal wave of new research is sure to come a trickle of weight-loss advice that can be more customized and more effective to help men and women with their weight-loss obstacles, no matter what they are.