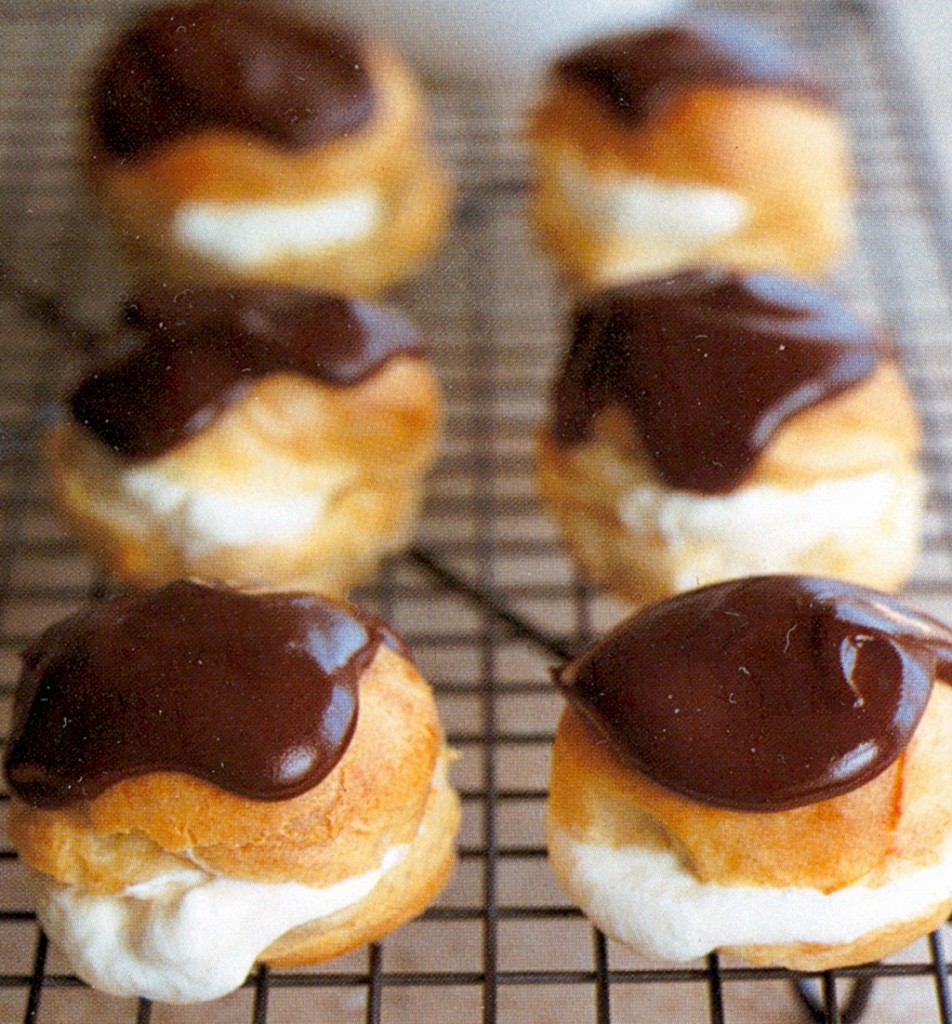 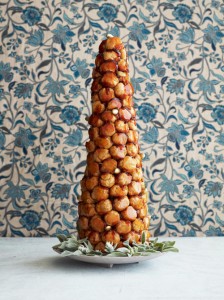 Looking for a tasty dessert this Yom Tov? Try an old classic — profiteroles! You may know them as cream puffs. A profiterole, cream puff or choux à la crème is a pastry ball filled with whipped cream, pastry cream, custard or ice cream. The puffs may be left plain or garnished with chocolate sauce, caramel or a dusting of confectioner’s sugar.

Cream puffs are made of a dough called choux pastry, or pâte à choux. Instead of a leavening agent like yeast or baking powder, it uses high moisture content to create steam during cooking to puff up the pastry. High heat causes the ball of dough to blow up and become hollow in the center. The oven is then turned down and the puffs are baked until they are rigid, firm and dry. The pastry itself is not sweet and can be used for sweet or savory fillings. Left plain, they can be used as a soup crouton. You may have seen pastry swans floating in your soup at a simchah; these swans are made of a cream puff fitted with a long swan-like head.

Choux pastry is used to make a number of different desserts. For cream puffs and éclairs it’s baked but for beignets it is fried. In Spain and Latin America, churros are made of fried choux pastry, dusted in sugar and served for breakfast.

The most popular story surrounding the history of cream puffs is that they were invented by Catherine de Medici’s cook. Catherine de Medici, daughter of the famous Renaissance Italy family of Medicis, was the queen of France. Legends credit Catherine’s cook at the royal court of France with inventing this tasty dessert. However, other food historians claim her cook did not invent puff pastries nor did he invent the cream puff. The ancestor of the cream puff can be traced back to the Middle Ages.

Long before Catherine de Medici’s cook set foot on French soil, cooks during the 13th century in southern Germany and France had created puff pastries filled with rich cheese mixtures. Pastry dough was cooked in a hot oven until it puffed, and then sliced open and cheese inserted. The warm pastry melted the cheese center. Herbs were often added for additional flavoring.

Almost all food buffs do agree on one thing. The pastry acquired the name choux, meaning cabbage, because a baked cream puff does have a cabbage-like appearance.

Cream puffs have been on American restaurant menus since the mid-1800s. In the U.S. they are most often filled with ice cream while custard is the more popular filling in Europe. Cream puffs are sometimes baked in a ring to form a whole cake. The pastry is piped in a 9-inch circle and baked until it’s puffed and dry. Then the ring is sliced open crosswise and filled with cream, custard or ice cream. It’s often topped with chocolate sauce or fruit sauce.

When making choux pastry it’s important to follow our step-by-step directions. Cream puffs are not difficult to prepare but the correct method is important.

Preheat the oven to 450°. Line 2 baking sheets with silpat or parchment paper.

Place the water, margarine and salt in a medium-sized saucepan and bring to a boil. Continue boiling until margarine is completely melted. Stir to combine. Remove from heat.

Add the flour all at once and mix with a wooden spoon or spatula until the mixture forms a ball. Add the eggs one at a time and mixing after each to a smooth, shiny paste. It will take a bit of effort to combine each egg thoroughly into the batter.

Using a piping bag fitted with a large round or star-shaped tip, pipe mounds for profiteroles or thick strips about 2 inches long for éclairs. Leave 2 inches of space between each to allow them to grow.

Bake for 15 minutes at 450°, then turn oven down to 350° and bake for 15 to 20 minutes longer. Remove from oven and allow puffs to cool completely. They should be firm and dry.

Fill a piping bag fitted with a doughnut-filler tip with Bavarian cream. Using the tip, poke a small hole on one side of the puff. Fill with custard. Fill just before serving as the filling will soften the pastry.

You can also fill your cream puffs with ice cream by slicing them across and filling with a small scoop of ice cream. Put the top back on and drizzle with your favorite dessert sauce.

Another famous cake created from cream puffs is known as croquenbouche. It is a tower of cream puffs bound together by caramelized sugar. The cream puffs are dipped into melted sugar and piled high. As the sugar cools and hardens it holds the puffs in place to create a tower. It is sometimes served as a wedding cake or at other traditional celebrations.