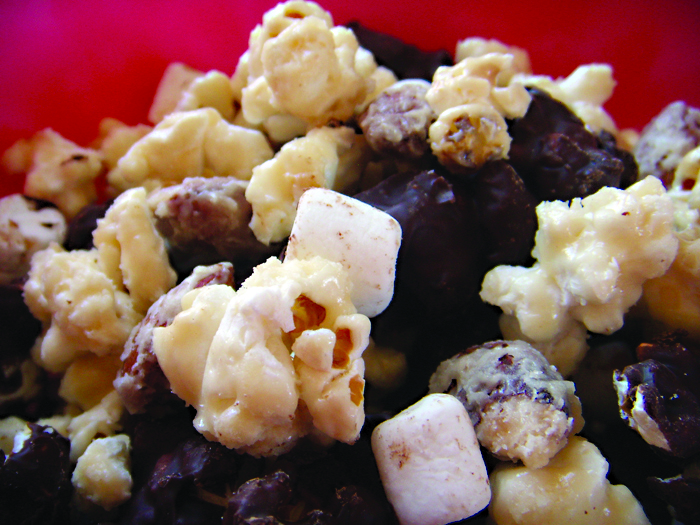 Did you know popcorn is the number one snack food in the U.S.? While enjoying your next handful, you can share some interesting popcorn trivia with your family.

How much popcorn does the average American eat annually?

One cup of oil-popped popcorn contains how many calories?

Popcorn pops because of…

There are _______ popcorn kernels in one unpopped cup. 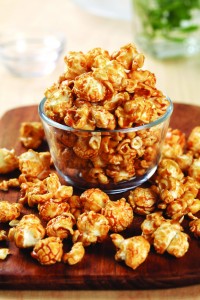 Most families eat lots of popcorn — 50–55 quarts every year — because they know it’s a low-calorie snack that fills you up. Popcorn is a whole-grain food, which makes it a complex carbohydrate that is not only low in calories, but a good source of fiber. Plus, popcorn has no artificial additives or preservatives, and is sugar-free. And, of course, it tastes good.

Popcorn is low in calories — only 30 calories in one cup of unbuttered, and even when lightly buttered, one cup still only has 133 calories. Hot-air-popped has even less.

The reason popcorn pops is simple. Each kernel of popcorn contains a small drop of water stored inside a circle of soft starch. Popcorn is actually 13.5 percent to 14 percent moisture. The soft starch is surrounded by the kernel’s hard outer shell. As the kernel heats up, the water begins to expand, and pressure builds against the hard surface. Eventually, this hard surface gives way, causing the popcorn to explode. As it explodes, the soft starch inside the popcorn blows up and bursts, turning the kernel inside out. The steam inside the kernel is released, and the popcorn is popped.

Popcorn is an economical snack. One cup of unpopped popcorn contains 1500 or more kernels. It will pop enough to feed a whole family for about $2.00.

Corn popping was originally discovered by Native Americans, but became popular as a snack food in the United States during the Great Depression because it was so cheap. During World War II, sugar rationing limited candy production, so Americans came to enjoy three times more popcorn than they had before.

There are many techniques for popping corn. Originally, Indians would heat sand and place the whole corn cob in the hot sand where the heat would pop the kernels while still attached to the cob. Later it was discovered that the taste improved when the kernels were heated in oil and Americans began popping it at home in kettles.

Commercial large-scale popping machines were invented by Charles Cretors in the late 19th century. He introduced the world’s first horse-drawn popcorn machine at the World’s Fair in Chicago in 1893. By 1908, Sears, Roebuck & Co. sold home corn poppers for 8¢ each and 25 pounds of popping corn still on the cob at 5¢. Popcorn balls were among the most popular confections in the late 1800s and early 1900s.

Homemade popcorn is now popped in small popping machines or the more popular microwave bags. Many purists will still pop corn in a large pot with oil for best flavor and crunch.

If you are wondering about those kernels which do not pop at proper temperatures, researchers have concluded that unpopped kernels do not have enough moisture to create enough steam for an explosion. Others say that the unpopped kernel may have a leaky hull.

In North America, popcorn is traditionally served salted, although a sweetened version, known as caramel corn, is also commonly available. In the United Kingdom, ready-made popcorn is available either salted or simply sweetened with sugar, both varieties being equally popular.

Popcorn is included on the list of foods that the American Academy of Pediatrics recommends not serving to children under four, because of the risk of choking. Special “hull-less” popcorn has been developed that offers an alternative for small children and for people with braces or other dental problems who may otherwise need to avoid popcorn.

Interestingly, some shipping companies have experimented with using popcorn as a biodegradable replacement for Styrofoam packing material. However, popcorn has numerous undesirable properties as a packing material, including its cost and that it attracts bugs.

Popcorn is extremely popular on its own, but many people incorporate it into tasty snacks.

Refrigerate until firm, about 2 hours or overnight. 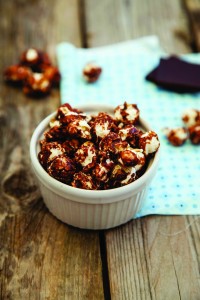 Preheat oven to 250°F. Spread popped popcorn and nuts in a large shallow pan and place in preheated oven.

Combine butter, brown sugar, syrup and salt in a saucepan. Cook over medium heat, stirring until sugar dissolves. Brush sugar from sides of pan with a wet pastry brush. Boil until mixture reaches 248°F on a candy thermometer, about 5 minutes. Remove from heat and stir in soda. Be careful as mixture will bubble up. Pour mixture over corn and nuts, stirring gently to coat. Return glazed popcorn and nut mixture to oven and bake 45 minutes, stirring every 15 minutes. When cooled, pack in airtight containers.