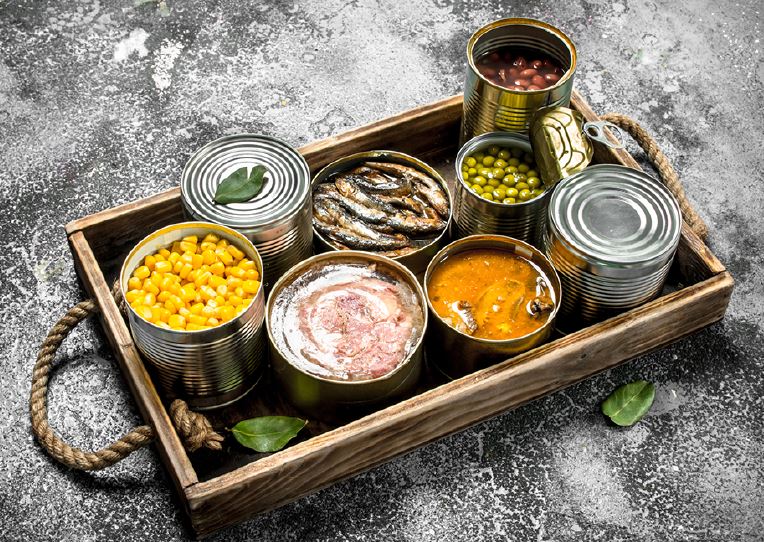 Nutrition may not always be top of mind during a global pandemic, but rest assured that even if you need to rely mostly on canned or frozen foods as you remain at home, you can create delicious and nutritious meals for your family.

“The good news about cooking with canned and frozen foods is that they can be just as nutritious as fresh varieties, and sometimes even more nutritious,” says Karman Meyer, a dietitian and recipe developer in Nashville.

Here’s some basic information about canned and frozen foods and how you can combine them with other pantry staples to make nutritious and affordable meals.

With a shelf life of up to five years, cans are excellent pantry staples. Steel cans have an airtight seal to guard against foodborne illness and contamination, and they are heated after packing to prevent spoiling, which kills bacteria. Although the heat treatment can destroy some vitamin C, it also boosts antioxidant content. The canning process increases the amount of the antioxidant lycopene in canned tomatoes, for example.

“Canned tuna and salmon, mandarin oranges, whole peeled tomatoes and beans are a few of the canned staples you will always find in my pantry,” says Whitney Reist, a dietitian and chef in Clarksville, Tennessee, who adds that canned foods are just as nutritious as fresh ones. A comparison study funded by the Can Manufacturers Institute shows that canned goods, especially vegetables and fruit, cost less than their fresh or frozen counterparts.

“Canned foods are preserved at the peak of freshness without using additives and use the same techniques that you would employ to can or preserve in your own home kitchen,” Reist says. She also notes that people who eat canned foods frequently are more likely to get the amounts of fiber, vitamins and minerals they need each day.

Even before the coronavirus, 90 percent of Americans said they use canned beans, chicken or fish as a convenient source of protein. Any of these can be used in sandwiches, to make dips, top salads or to add to soups and stews.

Ranelle Kirchner, a dietitian and chef in St. Paul, Minnesota, says she grew up on canned foods and always has canned beans, corn and mushrooms in her pantry. She recommends buying canned foods that are low in sodium when possible. “You can use herbs and spices to add flavor and minimize the need for salt,” Kirchner says.

You can also find a variety of nutritious, shelf-stable goods in containers other than cans, including jars (think peanut butter and tomato sauce), and aseptic cartons, often used for nondairy milks, soups and tofu.

Peanut butter lasts for about 12 months (unopened) in the pantry, or six to eight months once opened (and refrigerated). Foods in aseptic packages (think shelf-stable almond milk) are as safe as canned foods. The food is put into sterilized containers, then hermetically sealed with a sterilized closure to prevent bacterial contamination. Bonus: Aseptic-packaged food has an even longer shelf life than canned goods, plus better nutritional and sensory properties.

Freezing is one of the most common methods of food preservation. Once a food is frozen, there’s no water available for microbial development, which means bacteria can’t grow. This gives frozen foods a long shelf life. Vegetables last for eight months in the freezer, while fruit lasts 12 months. Meat and poultry can be frozen for up to one year, lean fish for six months, and fattier fish such as salmon for three months.

Because vegetables and fruits are processed immediately after harvesting, nutrient losses are minimal. “Frozen fruits and vegetables are picked at the peak of freshness, then flash-frozen to maintain nutritional quality until used in your home,” Meyer says. Studies show that frozen vegetables and fruit have the same amount — and sometimes even higher quantities — of vitamins, minerals and fiber, when compared with fresh produce.

Kirchner says she always has corn, edamame and a variety of fruits in her freezer.

With a few other pantry staples, you can create nutritious, tasty and affordable meals that start with canned or frozen items. Here are a few suggestions for a family of four.

Tomatoes, rice, beans and onions work beautifully together. If you have these staples on hand, add two cups of dry rice, one 14-ounce can of tomatoes, one diced onion, and one cup of water to a pot. Season with salt and pepper, and add your favorite spice blend, such as chili powder, curry powder or Italian seasoning.

Simmer until liquid is absorbed and rice is tender, about 10 to 15 minutes. Add one can of drained and rinsed black, kidney or pinto beans, and enjoy.

Cara Rosenbloom is a registered dietitian and author.