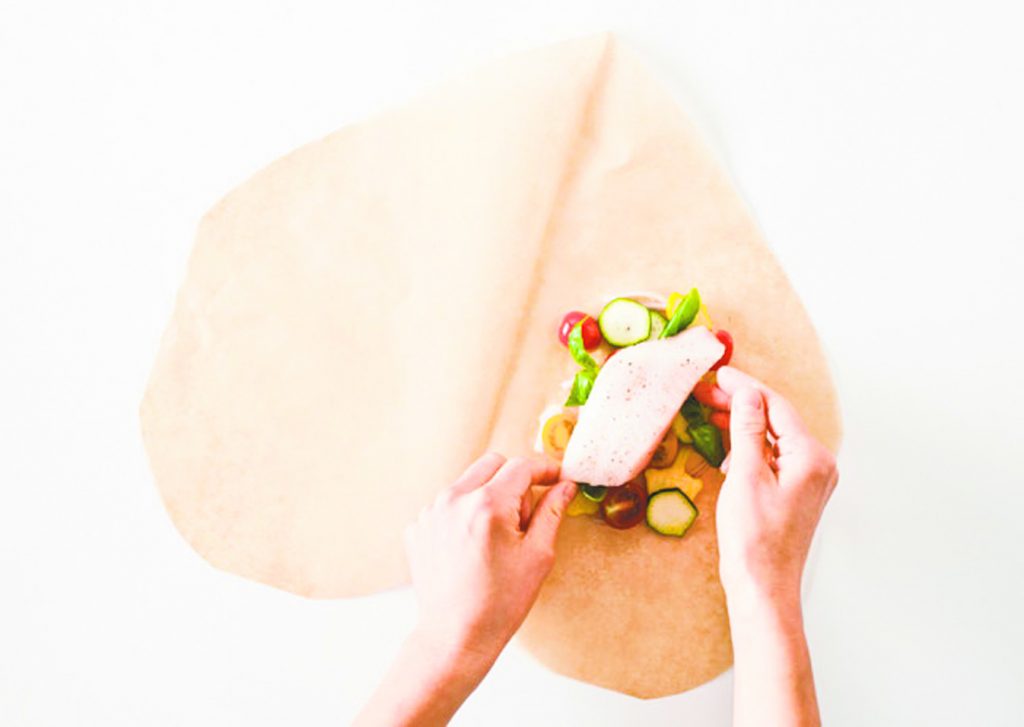 Cooking en papillote — steaming small portions of food in a wrapper — is a classic technique. Some cultures use grape leaves, banana leaves, cornhusks or other natural materials to wrap delicate foods before cooking. They add vegetables, herbs and spices for seasoning.

Steaming requires little or no added fat; steam builds up in the packet to cook food quickly yet gently. The nicely wrapped package allows you to add juices, spices or herbs.

Steaming en papillote requires no special equipment, other than a roll of parchment paper. And, of course, cleanup is easy — just toss the parchment when you’re done.

Perhaps the best part about cooking en papillote is that it’s a solution for busy weeknight dinners. There’s something inherently festive about opening a packet at the table to free a cloud of fragrant steam.

A few important things to keep in mind: Never substitute wax paper for parchment when steaming. Wax paper tears easily, and more importantly, it will burn and eventually leak liquids. Parchment paper can safely be used in an oven at temperatures up to 450°. The parchment will be puffy and slightly browned when the dish is nearly done.

Think about the size of the foods cooking together in a parchment packet; consider the amount of time it will take for the main ingredient to cook, and cut the accompanying items into sizes that will cook in the same amount of time. If you’re preparing a fish fillet with potatoes, for instance, you’ll need to slice the potatoes thinly so everything will be done at once. Otherwise, you’ll end up with undercooked potatoes or overcooked fish.

Add flavor with fresh or dried herbs, salt, pepper, and other spices, and liquids like wine, broth or juice. Adding a drizzle of olive or canola oil goes a long way towards adding taste as well.

Fold parchment in half crosswise, making a crease down the center.

Draw half of a heart shape on paper. Cut out heart, and open the parchment.

Layer ingredients in one half of the sheet, making sure to leave at least a 1-inch border around the cut edges.

Starting at the round portion of the heart, fold paper, tightly sealing edges with narrow folds.

Twist the tip portion of the heart to seal.

Place packets onto an ungreased baking sheet, and bake.

2 tablespoons za’atar or other spice mix

Place chicken and spice mixture near the center of each square of parchment paper as instructed above. Place slices of lemon on top.

Working one package at a time, fold the parchment over the chicken. Repeat with remaining packets.

Place the packets on a rimmed baking sheet and bake until the chicken is cooked through, 20 to 25 minutes. Transfer each packet directly to a serving plate and serve, breaking open the packets at the table.