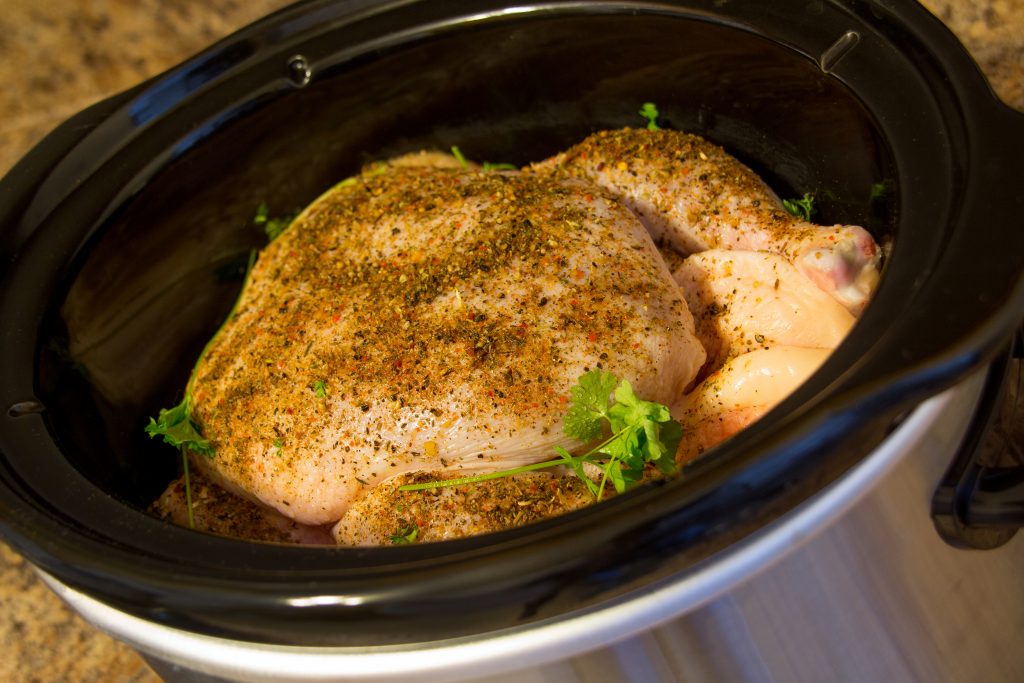 It’s been a couple years now since at-home sous-vide has come into vogue. And for good reason: Who doesn’t want perfectly cooked food that you needn’t watch over every moment? You too can now emulate your favorite restaurant chef!

As busy parents of toddler twins, my chef husband and I have struggled to cook since our kids were born, but we really didn’t want to invest in more kitchen equipment.

My husband struck on an idea one night. He came home from work, wiped. We had a chicken in the fridge that I’d been promising to roast, but hadn’t gotten around to. The fridge was mostly empty, and we had no dinners planned for the week. With no energy to sit up while the bird roasted, he cranked the oven high, seasoned the chicken aggressively, put it in a heavy-lidded pot and stuck it in the oven for a half hour to start it browning. When the kitchen began to fill with the scent of rendering fat, he added water to come up the bird a little more than halfway, clapped the pot’s top on, turned the oven down to 200 degrees and went to bed.

The next morning, we unlidded the thing: The chicken was straw gold on top, with an almost creamily luscious broth surrounding it. The meat pulled off the bone at the barest pull from a fork. We used the liquid as the base for soup, shredding half the meat to add in and saving the rest to serve cold on salads later in the week.

We tried again the next week, dropping a couple of star anise, a cinnamon stick and some coriander seed into the pot with the water, then added a tangle of rice noodles when we reheated the broth, along with an oddball selection of chopped vegetables

My pleasure in this new turn in our kitchen was tremendous and I told similarly time-strapped friends about the overnight chicken. Chris described it as slow poached.

Quickly, the overnight chicken became the foundation of our work-week cooking. We’ve found it endlessly versatile, shredding the meat for tacos, tossing cubed chicken into pasta, serving it cold over salads and tucking it into our kids’ lunchboxes. When we don’t need the broth right away, we freeze it, building an arsenal for future soups, stews and braises. Leftover meat goes into cold noodle salads for lunch or sits atop mounds of rice with a fried egg for a speedy working-at-home lunch for me. It’s a terrific get-ahead trick for all sorts of chicken soups, broth and meat in one.

Rinse the chicken, inside and out, under cool running water. Pat dry with a paper towel and set on a large plate. Season aggressively with kosher salt all over and inside the cavity. Refrigerate uncovered for at least eight hours and up to 24 hours.

When you’re ready to begin cooking, position a rack in the lower third of the oven; preheat to 450 degrees.

Place the chicken in a Dutch oven (eight-quart) or heavy pot with a lid. Season with several grinds of black pepper. Roast uncovered for 30 to 45 minutes or until the skin has browned, then remove the pot from the oven, leaving the oven door ajar. Reduce the temperature to 200 degrees.

Add the water to the pot, or more as needed to come up about two-thirds on the sides. Cover tightly and return to the oven; slow-roast, undisturbed with the oven door closed, for six to eight hours.

Transfer to the stovetop (off the heat); uncover and let cool until the broth is a warm, non-injurious temperature. Place the chicken on a cutting board; pull all the meat, discarding the skin (if desired) and bones. Strain the broth left in the pot, discarding any solids.

Use right away or place in separate containers for storing.

Adapted from a recipe by chef Chris Bradley.