Columns Nutrition Onions, Shallots, Scallions and Leeks Are Mostly Interchangeable in Recipes. Here’s How to Use What You Have.
Nutrition 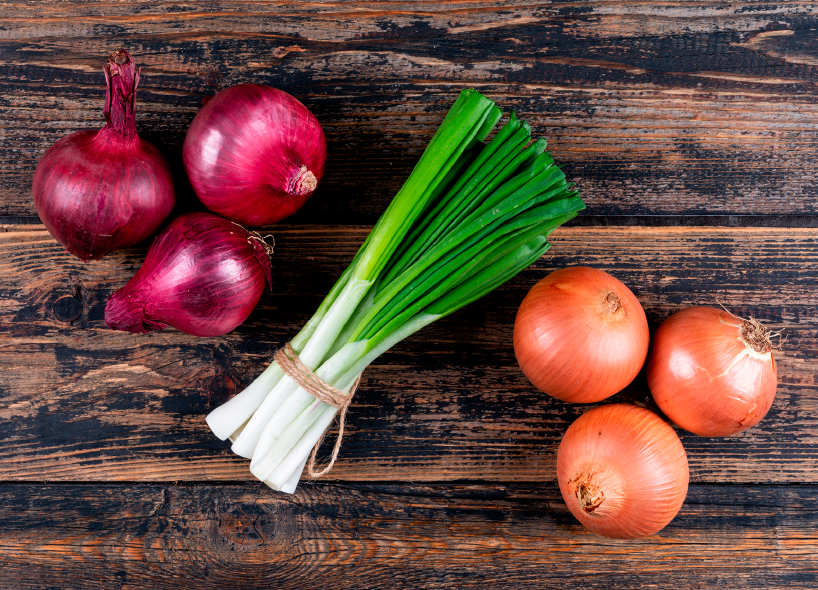 Onions are a staple of cooking in almost every cuisine and season. They’re so commonplace that you probably have one variety or another around the house. But what happens when you don’t have the type called for in a recipe?

Not a whole lot, it turns out. “I think they’re more interchangeable than people think,” says Kate Winslow, who wrote Onions Etcetera: The Essential Allium Cookbook with her husband, Guy Ambrosino. In addition to the three standard bulb onions — red, white and yellow — you tend to see, that also includes close relations shallots, scallions and leeks.

“Don’t let yourself be stopped” when a recipe calls for a particular onion and you only have others in the pantry, Winslow advises. With some adjustments, you can probably make it work.

In a cooked dish, red, white and yellow onions are acceptable substitutes for each other, Winslow says. Cooked red onions can muddy the color of a dish — when the other ingredients are alkaline, they can even turn bluish-green — but the flavor will be the same.

Raw is a slightly different story. Red onions are often served as is on top of sandwiches or salads, while Winslow tends to prefer yellow and white to be cooked. Chopped white onion can work as a garnish, though it will be sharper than red onion.

Shallots are another option for eating raw. “Shallots are a little more delicate,” Winslow says, but are a good swap for red onion, cooked or uncooked. They are generally more expensive than red onions, and their smaller size means you have to do more work peeling and trimming to yield the same amount of a larger bulb (they won’t cook faster, however), so keep that in mind before you commit to using shallots in lieu of several cups worth of red onions.

Shallots don’t last as long as regular storage onions, meaning if you happen to come into a windfall, consider using them sooner rather than later, including as a pinch-hitter. Their milder flavor means you can follow Winslow’s advice and use shallots for a modified version of creamed onions, typically made with mellow pearl onions.

Leeks, while similar in concept to scallions, aren’t as well-suited to being eaten raw, thanks to their more fibrous texture. But they can work well as an onion substitute when cooked. Winslow thinks of leeks as somewhere between a scallion and a bulb onion.

They have a “more subtle, refined kind of oniony flavor” — neither the sharpness of a scallion nor eye-watering spiciness of an onion. “I think we can revamp our thinking and remind ourselves that leeks are just an elongated bulb,” Winslow says.

Any of these varieties of alliums will deliver some kind of onion flavor. It’s just a matter of adjusting your prep.

Take size into account. Winslow says one medium onion will yield about 1 cup chopped. That will require a different number of, say, shallots or leeks for the same volume.

Think about how you will cut and cook them. Scallions are by nature smaller and thinner and will cook, and burn, faster than bulb onions. (So, no, caramelized scallions aren’t happening.) If you’re using them as an onion substitute, you’ll want to cook only briefly and consider slicing them larger than you normally would.

Leeks are best cooked to a soft consistency; adjust the timing or size of your slices accordingly.

Sometimes you can get away with not cooking at all. A garnish of scallions or shallots on a finished dish still gets at the spirit of onions added at the beginning. Winslow says if your meatball or meatloaf recipe first calls for cooking down onions, consider instead working raw scallions into the ground meat for a brighter taste. Ditto stuffing, where scallions and shallots can deliver that fresher flavor in addition to a pleasant crunch.

Trust yourself. When it comes to playing around with onions, don’t be afraid to go with what’s working for you. “You suddenly might find yourself with a flavor you like more,” Winslow says. “Ninety-eight percent of the time, it’s going to be totally fine.”