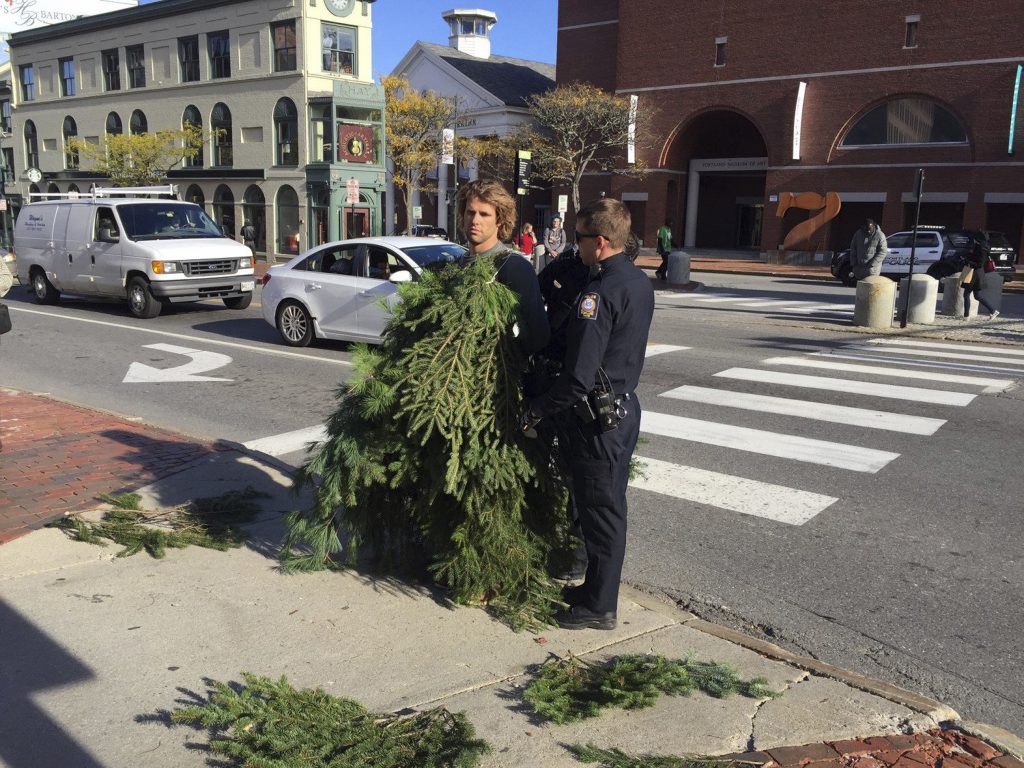 HOT SPRINGS, Ark. (AP) – A former county employee in Arkansas has been arrested after prosecutors accused her of using a county credit card to buy personal items including a tuxedo for her dog.

The Sentinel-Record newspaper reports that Kristi Goss was arrested Tuesday on six counts of fraudulent use of a credit card. Goss had worked as administrative assistant for the Garland County judge’s office.

Investigators and auditors flagged about $200,000 in purchases made on the county’s credit card, including a diamond bracelet, pet insurance and the dog tuxedo.

Court records do not list an attorney for Goss.

PORTLAND, Maine (AP) – A man arrested for blocking traffic in Maine while dressed as an evergreen tree says the public display was intended as performance art.

Asher Woodworth tells the Portland Press Herald that his embodiment of a tree inching across a busy downtown intersection was designed to reflect a contrast in the “energies of economy and efficiency and the energies of slowness and magic.”

Woodworth apparently moved too slowly. He was arrested for obstructing traffic when he failed to heed a warning by police officers, and released on $60 bail.

Friend Hamilton Poe knew Woodworth at Bennington College in Vermont and says Woodworth can sometimes “get into trouble in funny ways but never in malicious ways.”

DENVER (AP) – Anheuser-Busch says it has completed the world’s first commercial shipment by self-driving truck, sending a beer-filled tractor-trailer on a journey of more than 120 miles through Colorado.

The company says it teamed with a self-driving truck maker. The trailer, loaded with Budweiser beer, began the self-driving trip Thursday in Fort Collins, Colorado, and ran along Interstate 25 through Denver before wrapping up in Colorado Springs.

The company says a professional truck driver was on board for the entire route and monitored the trip from the cab’s sleeper berth.

HAMPTON, N.H. (AP) – A bottled message sent out to sea by a New Hampshire man more than five decades ago has been returned to his daughter.

WMUR reports the message was discovered by Clint Buffington of Utah while he was vacationing in the Turks and Caicos.

Buffington says he found a Coke bottle half-buried in the sand. The note inside the bottle said, “Return to 419 Ocean Blvd. and receive a reward of $150 from Tina, owner of the Beachcomber.”

The Beachcomber was a Hampton motel owned by the now-deceased parents of Paula Pierce in 1960.

Pierce’s father had written the note as a joke and cast it into the Atlantic Ocean.

Buffington flew to New Hampshire to deliver the message to Pierce. She made good on the promised reward.

LUDINGTON, Mich. (AP) – Guinness World Records says a roughly half-mile-long ice cream sundae that was gobbled up in Michigan this June was the longest ever.

The Ludington Daily News reports that the sundae measured a little over 2,970 feet in length and fed thousands of people lining eight blocks in the Lake Michigan town.

According to Guinness, the previous longest ice-cream dessert was created in 2015 in Manurewa, New Zealand, and it was 1,957 feet and 1 inch.