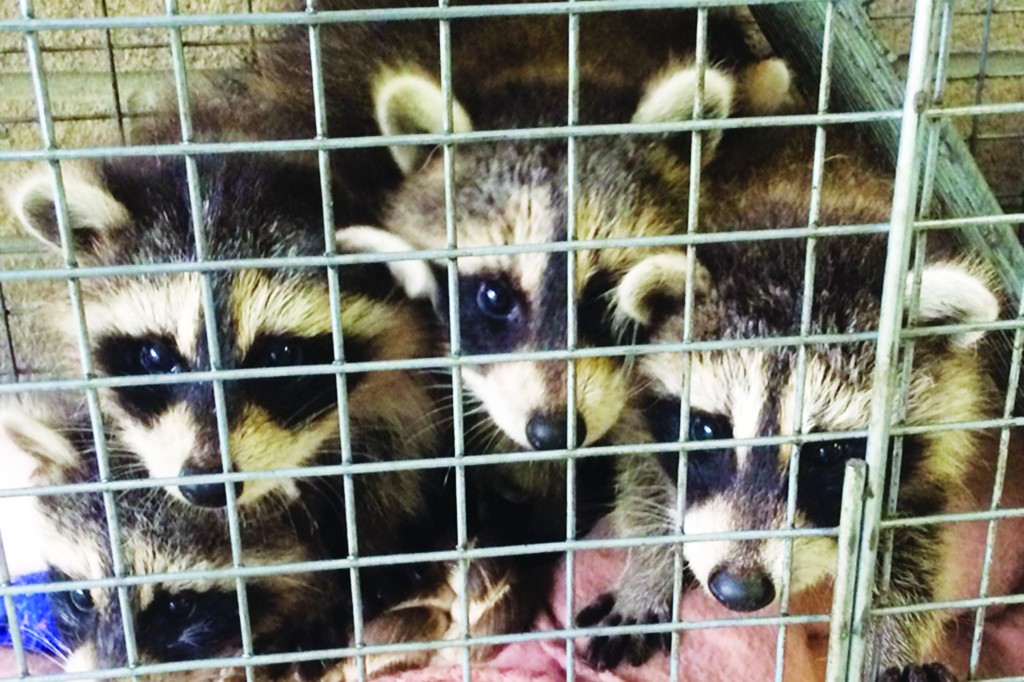 WHITE PLAINS, N.Y. (AP) – Someone left five well-fed baby raccoons on the doorstep of the Westchester County Health Department Friday morning, and the department said that person should call immediately to be assessed for the possibility of rabies.

The month-old raccoons were delivered to the department’s office in Mount Kisco in a cage with bottles of milk, blankets and toys, the department said.

“They appear to have been well cared for and nurtured, which means that there was direct contact between these raccoons and the person or people who were caring for them,” said Dr. Sherlita Amler, the county health commissioner. “That’s why it’s important that we talk to the individual or individuals who left them to determine if they may have been potentially exposed to rabies.”

Raccoons are among the most common carriers of rabies, a disease that is fatal if not quickly treated.

Department spokeswoman Caren Halbfinger said if the raccoons’ caretaker comes forward, he or she will be asked about any bites or scratches. Officials also want to know if the raccoons’ mother was sick.

That would help determine whether the animals must be tested for rabies, which can only be done by killing them, and if any people need treatment.

The raccoons were placed with a certified wildlife rehabilitator who will watch them for signs of the disease.

INKSTER, Mich. (AP) – A Detroit-area woman, a member of a select group of the living to have been born in the 19th century, celebrated a birthday on Friday.

Jeralean Talley, who was born May 23, 1899, went fishing last year and still gets around on her own with the help of a walker.

Talley’s knees occasionally hurt, her right hand shakes, she has a hard time hearing and her memory comes and goes.

Talley is the oldest-living American and the second-oldest person in the world, according to a list maintained by the Gerontology Research Group, which tracks the world’s longest-living people.

Talley, whose husband died in 1988, is cared for by a 76-year-old daughter who lives with her.

Five generations of the family are living in the area, including a great-great-grandson.

Myrtle Creek Police Chief Don Brown says a teen boy and his parents dropped off the cub in a large plastic storage bin at the police station. The teen found the small animal whimpering in the bushes outside his house on the outskirts of town.

He told police the bear’s mother was nowhere in sight.

Still, Brown said it was dangerous for the teen to pick up the cub, because the mother bear could have spotted him and attacked. Adult female black bears can weigh up to 300 pounds.

The 12-pound cub was “very well behaved” while spending the night at the station, Brown said.

Police and Oregon Department of Fish and Wildlife officials looked for the cub’s mother the next day using a device that mimics a cub distress call, but couldn’t find her.

The orphaned cub is now at the University of Oregon receiving a veterinary checkup. Fish and Wildlife officials said the cub is a female and is in generally good health, other than being underweight.

They said the cub will be placed at a zoo, but they didn’t yet know which one.

Oregon is home to 25,000 to 30,000 black bears. Myrtle Creek, 90 miles south of Eugene, has an abundance of wildlife, the police chief said. Residents often call authorities about bear and cougar sightings.

“We’ve had two baby rattlesnakes brought into the station, but nobody has brought in a bear in the last nine years I’ve been here,” Brown said.

Wildlife officials say they do not know what happened to the cub’s mother. Spring bear hunting season kicked off April 1 in Oregon, but it’s illegal to kill sows with cubs that are less than a year old.

HELENA, Mont. (AP) – Everyone has heard of homing pigeons, but Montana fifth-grader Tara Atkins apparently has a “schooling pigeon.”

The pet bird named Foresta had disappeared Tuesday from Tara’s home in the Elkhorn Mountains near Montana City, but it was back in her arms Wednesday after it showed up at her school about five air miles away in Helena.

“This pigeon has never been to town before,” Atkins’ mother, Krys Holmes, said. “We got her as a baby, and she just hangs out at home.”

The bird caused a ruckus when it arrived at Central-Linc Elementary, first sitting on teacher Rob Freistadt’s head, the Independent Record reported

Staff members and a police officer tried for an hour to corral the bird that Principal Vanessa Nasset said was just “sky-bombing everyone.”

Nasset asked Tara for help catching the bird after a parent remembered she had a pet pigeon.

Tara recognized Foresta by her distinct coloration and the blue band around her leg.

“I was pretty happy,” Tara said.

But as Tara tried to catch her pigeon, the school bell rang and students poured outside, delaying the capture again.

Fellow fifth-grader Owen Cleary finally caught the bird by throwing a blanket over it while it sat on his head.

Holmes said she doesn’t know how the bird ended up at her daughter’s school.

“It is the most amazing thing,” she said.