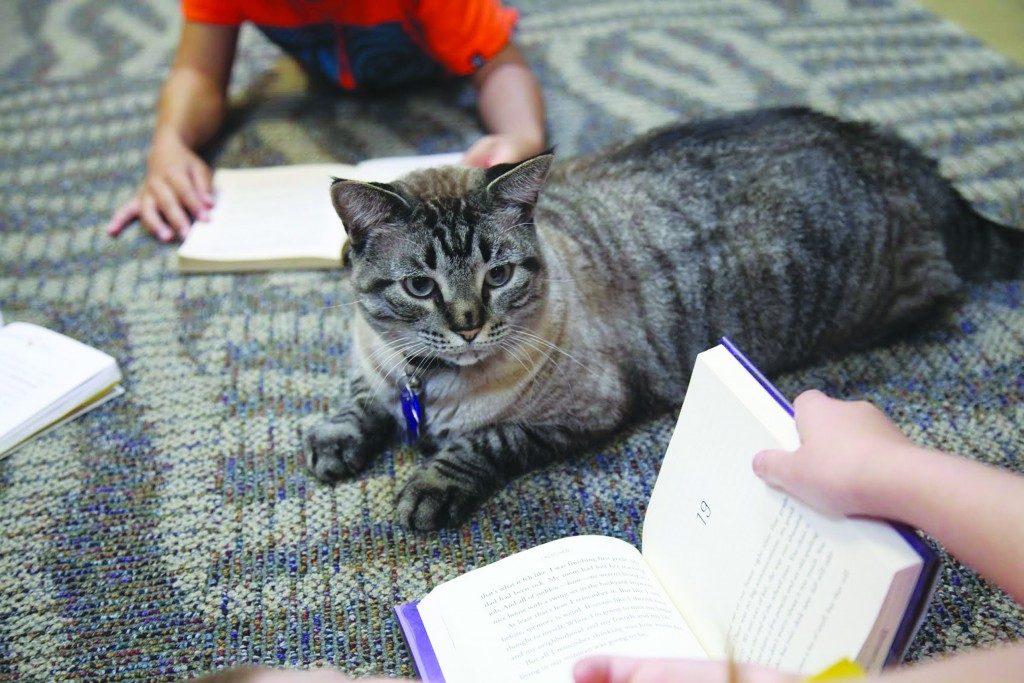 WHITE SETTLEMENT, Texas (AP) – A North Texas city council has voted unanimously to reinstate Browser the cat to his job as live-in mascot of the city’s public library.

KRLD-AM in Dallas-Fort Worth reports the governing council of the Fort Worth suburb of White Settlement voted 3-0 to let Browser stay at the library two weeks after voting 2-1 to give the tabby 30 days to check out.

Mayor Ron White had said the move against Browser was a response to officials’ denial of permission to an employee to bring a puppy to work at City Hall. But he says he was overwhelmed with more than 1,000 messages on social media, all in support of keeping Browser on the job.

The vote was taken without hearing from Browser’s supporters who jammed the council chamber.

BERLIN, Germany (AP) – A German court had to restart the trial of two men suspected of robbing a grocery store because a judge kept nodding off during the proceedings.

The Muenster state court told the dpa news agency on Tuesday that the presiding judge decided it was better to start things over than provide immediate grounds for an appeal.

German trials are typically heard by a panel of five judges — three professionals and two lay judges. In this case, it was one of the lay judges who couldn’t stay awake on Monday.

Fortunately, it was the first day of the trial and it was able to start again from scratch after an alternate judge took his place.

British Family Treated to a Night In Eiffel Tower Apartment

(Reuters) – The Eiffel Tower is a must-see for many tourists visiting Paris, but for one British family this week it also became their home for the night.

Michelle Stevenson won an overnight stay at the famed landmark in a contest in which participants were asked: “What would you do if the HomeAway Eiffel Tower apartment was all yours for a night?”

The mother of two autistic sons was among four winners treated to a night in the ephemeral luxury apartment on the structure’s first floor with sweeping views of the French capital and a tour through passages closed to the public.

“It was for them, really, because they’re fascinated by the Eiffel Tower, the structure and the lights,” Stevenson said, referring to her sons. “Being autistic, I think the lights is just the big wow factor for them…It’s just something that they’ll never do again.”

LOS ANGELES, Calif. (AP) – The reeking carcass of a dead humpback whale was towed back out to sea some 24 hours after washing up at a popular Los Angeles County beach Friday.

Authorities used boats pulling ropes attached to the tail to pull it off the sand during the evening high tide, taking the whale far out to sea and avoiding a foul stench and grim scene on the beach as Fourth of July weekend crowds began arriving.

Authorities had earlier attempted the procedure at midday, with a bulldozer pushing, but were unsuccessful because of the low tide.

The huge whale washed onto Dockweiler Beach, a long stretch of sand near the west end of Los Angeles International Airport, just before 8 p.m. Thursday and holiday beachgoers began arriving in the morning.

Lifeguards posted yellow caution tape to keep people away and biologists took samples to determine what caused the death of the humpback, an endangered species. Beachgoers watching from a distance covered their noses.

Tail markings were compared with a photo database and found that the same whale had been spotted three times previously off Southern California between June and August of last year by whale watchers who gave it the nickname Wally, said Alisa Schulman-Janiger, a whale research associate with the Natural History Museum of Los Angeles County.

At the time of the prior sightings the humpback was covered with whale lice, which usually means a whale is in poor physical condition, but it was also actively feeding and breaching, she said.

Schulman-Janiger said she noticed healed entanglement scars on its tail indicating that in the past it been snarled in some sort of fishing line. The carcass was in relatively good condition, which meant the whale could have died as recently as Thursday morning, she said.

The whale was about 46 feet long and at least 15 years old, meaning it had reached maturity, said Justin Greenman, stranding coordinator for the National Marine Fisheries Service.

Humpbacks, familiar to whale watchers for their habits of breaching and slapping the water, are filter feeders that consume up to 3,000 pounds of krill, plankton and tiny fish per day.