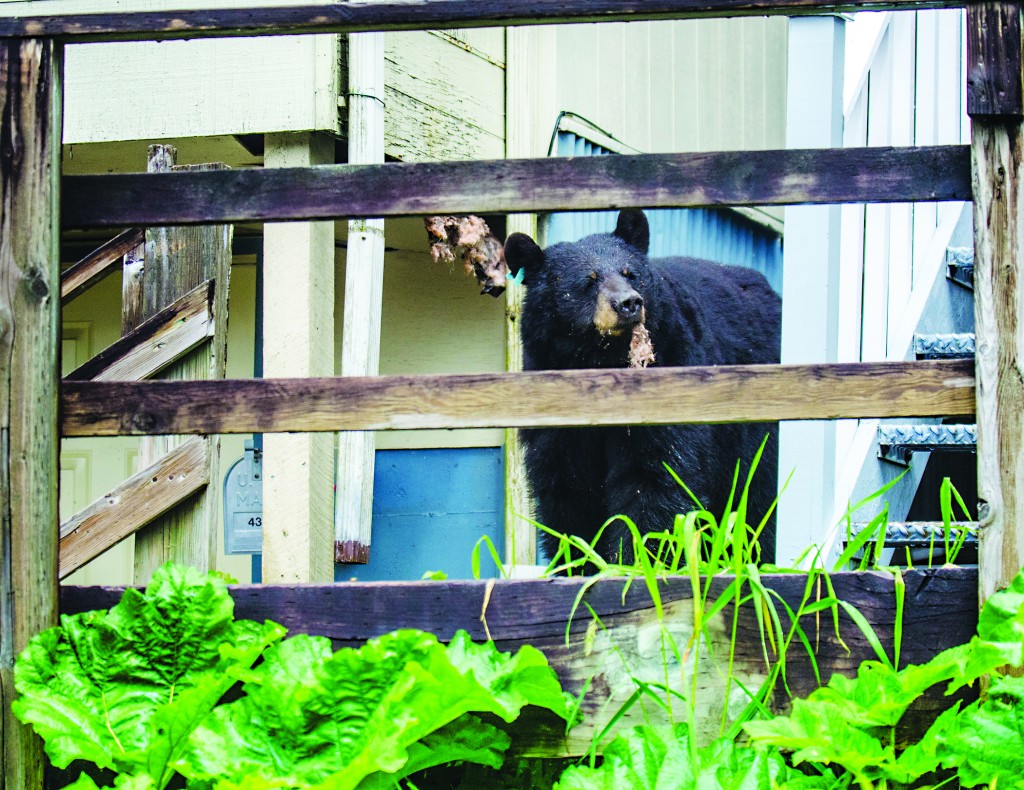 Black bear digs through insulation to get honey

JUNEAU, Alaska (AP) – A black bear in Juneau, Alaska, didn’t let a few floorboards keep him from getting at some honey.

The male bear walked up the stairs of a porch at the home of Janet and Donald Kussart and tore through the floorboards and some insulation to get his treat, the Juneau Empire reported.

The bear was wearing an Alaska Department of Fish and Game tag.

A neighbor, Ira Winograd, said the bear must have smelled a beehive through the wall of the house, so he tore it up to get to his meal. Afterward, the bear ambled along a walkway and eventually darted into the forest.

Janet Kussart said people are used to having bears in the Starr Hill neighborhood.

On Saturday, a different bear fell through a skylight at the Juneau home of Alice Bishop and Glenn Merrill as they prepared for their son’s first birthday party.

The dazed bear recovered enough to help itself to the cupcakes before the couple were able to shoo the bear outside. The animal retreated to the woods when Merrill used some bear spray.

Authorities believe that bear was killed 30 minutes later when it entered another home.

CHICAGO (AP) – An evacuation slide inflated inside a United Airlines plane as it flew from Chicago to Southern California, filling part of the cabin and prompting the pilot to make an emergency landing in Kansas, a passenger said Monday.

Mike Schroeder, 58, said he was flying to Orange County, California, late Sunday when he heard a hiss and pop. Schroeder said he turned around and saw the plane’s evacuation slide starting to inflate. The slide — which would normally inflate outside the plane during an emergency — filled the galley.

“I thought to myself, ‘I hope there is no one in the restroom because if they are they’re not coming out for a long time,’” he said in a telephone interview Monday morning as he and the other passengers prepared to board a bus from a hotel back to the airport to resume their journey. He said it was lucky that no flight attendants were in the galley at the time as they would surely have been hurt.

United Airlines officials said in a statement Monday that no one aboard Flight 1463 was injured.

Schroeder, a lawyer from Newport Beach, California, said he was surprised at how calm all the passengers were, with many — himself included — snapping photos of the inflated slide with their phones. For a short time, he said, lights went out along the left side of the Boeing 737-700.

The pilot announced that the plane had not lost cabin pressure and that he was looking for a place to land; a couple of minutes later the pilot said they would be landing at Wichita’s Mid-Continent Airport. The plane went into what Schroeder described as steep decline,” but the landing was uneventful. The plane was escorted to the terminal by a fire truck.

“When the pilot came out right after landing he said, ‘I’ve never seen that before,’” said Schroeder, who was traveling with his 28-year-old daughter. He said United has already informed passengers that they will each receive $300 in travel credit.

Christen David, a spokeswoman for the Chicago-based airline, said the slide “accidentally deployed” and that all 96 passengers were seated when the slide inflated. The airline provided passengers with hotel rooms and planned a flight Monday morning from Wichita to California.

Elizabeth Cory, a spokeswoman for the Federal Aviation Administration, said agency investigators were at the scene in Wichita, but that the investigation would take weeks.

LOS ANGELES (AP) – People in San Luis Obispo County received a series of unsettling, erroneous emergency alerts Friday as repairs were being made to a nuclear power plant’s siren system, including a vague cellphone message that told them to “prepare for action.”

Earlier in the day, crews had upgraded the siren as part of Pacific Gas & Electric Co.’s summer-long revamp of the emergency system.

To indicate there was no emergency, county officials issued an alert.

“Unbeknown to us, with a new emergency alert system, it also triggered the new wireless alert cellphone system,” Alsop said.

Across the county, people’s cellphones buzzed with a special tone and a message that said there was a “civil emergency in this area” and people should “prepare for action.”

“I had 15 people here, looking at their phones and asking what to do,” she said.

Nisse Noble, 27, was at her apparel company’s office when she received the message. The vague warning was “unsettling,” leading her to think there was a mass shooting, a nuclear accident or a criminal at large in the area, she said.

“We didn’t know where we should turn or what we should prepare for,” Noble said.

When county officials realized the gaffe, they issued a final message stating that there was no cause for alarm.

“We’re just glad we learned this before we had an actual emergency,” Alsop said.

The 131 sirens across the county are used not only for an emergency at the nuclear plant, but also for other emergencies such as an evacuation due to a tsunami or dam failure, PG&E said. The utility said it was investigating what caused the siren to sound.

PORTLAND, Ore. (AP) — An Oregon horse that had to lose 200 pounds before it could join the Portland Police Bureau’s Mounted Patrol Unit has collared its first suspect.

Murphy, carrying Officer Cassandra Wells, chased down a man suspected of breaking into a building last week and kept him trapped next to a building until officers could cuff him.

Murphy was added to the mounted patrol last year, but when he arrived, he weighed 1,900 pounds. The unit didn’t have a saddle big enough for him.

After losing 200 pounds he went through training and is now on Portland streets.

SKOWHEGAN, Maine (AP) — A Maine town will spend $27,500 to correct mistakes it made that led to a youth football field being accidentally built on private property.

Officials in Skowhegan say they skipped the step of ensuring that the field was built on the property of the Skowhegan Community Center sports complex. The field ended up partially on abutting property owner Kris Laney’s land.

The Morning Sentinel reports that the town will purchase a 50-by-470-foot piece of land from Laney for $15,000.