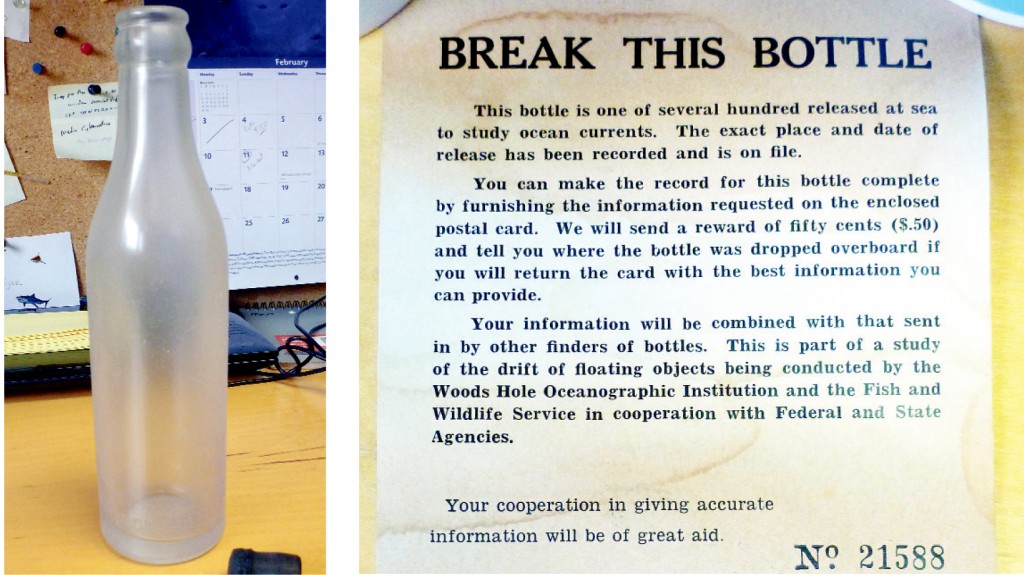 BOSTON (AP) — It was April 1956. At the Woods Hole Oceanographic Institution on Cape Cod, scientist Dean Bumpus was busy releasing glass bottles in a large stretch of the Atlantic Ocean.

Nearly 58 years later, a biologist studying grey seals off Nova Scotia found one of the bottles in a pile of debris on a beach, 300 miles from where it was released.

“It was almost like finding treasure in a way,” Warren Joyce said Friday.

The drift bottle was among thousands dumped in the Atlantic Ocean between 1956 and 1972 as part of Bumpus’ study of surface and bottom currents. About 10 percent of the 300,000 bottles have been found over the years.

Joyce found the bottle Jan. 20 on Sable Island, about 185 miles southeast of Halifax.

He contacted scientists at Woods Hole and dutifully gave them the time and place information Bumpus had asked for in a postcard inside the bottle. His reward will be exactly what Bumpus promised in 1956 to anyone who returned a bottle: a 50-cent piece.

“I didn’t want the reward, but they said they are sending it to me anyway,” Joyce said, chuckling.

Joyce said the bottle had been sand-blasted over about 75 percent of its surface. He could still read the words, “Break This Bottle,” so he pried off the rubber stopper. Inside, there was a note from Bumpus explaining that the bottle was among many being released to study the ocean.

In those days, there was no other way to study currents, said Steven Jayne, a senior scientist at Woods Hole.

“We didn’t have satellites to track currents like we do now. So the only thing you could do was to see where something started and where it ended up,” he said. “That was a pretty good approach.”

Using the number on the postcard, Woods Hole workers tracked the bottle found by Joyce to a group of 12 released not far off Nova Scotia on April 26, 1956.

Woods Hole archivist David Sherman said three other bottles from the same batch were found within a few months after they were dropped in the ocean: two in Nova Scotia and a third in Eastham, on Cape Cod. There’s no way to tell for sure when the bottle Joyce found washed up on Sable Island, but judging by its sand-worn condition, it may have been there for decades, Sherman said.

Bumpus needed thousands upon thousands of empty bottles for his well-intentioned littering of the seas. In September 1959, he solicited colleagues’ help, writing in a memo: “All hands are respectfully requested (until further notice) to bring their dead soldiers to the lab and deposit them in the box just inside the gate… [they] will be used to make drift bottles. Any clean bottles — 8 oz. to one quart in size will be gratefully received.”

“Some of them were probably damaged, some were probably kept as keepsakes, and the rest, who knows? We may find some more in the future,” he said.

“I think everybody loves to find a message in a bottle.”

Police: Thieves tried to sell items back to victim

DENVER (AP) — Denver police have arrested four suspects accused of unwittingly trying to sell items they stole back to the burglary victim.

KMGH reports Lacinda Robinson discovered the items missing at her home on Friday and drove to the parking lot of a nearby fast-food restaurant to report the theft. That’s where she says she was approached by two people asking if she wanted to buy a video game set.

Robinson says she was startled when another person walked up wearing her jacket. She went next door to a gas station and found two off-duty police officers who made the arrests.

Firefighters save dog from sinkhole in Buffalo, NY

BUFFALO, N.Y. (AP) — A German shepherd is back on solid ground after being rescued from a sinkhole that opened up in a Buffalo park.

The 3-year-old dog named Mack dropped more than 10 feet to the bottom of the watery hole during a Sunday morning walk with his owner, Mattie Moore, who nearly fell in herself.

Moore’s 911 call brought the fire department’s technical rescue team to Martin Luther King Jr. Park, where a broken underground water pipe had eroded the soil and created an opening about 2 feet across on the surface but wider below.

“She was crying,” firefighter Michael Paveljack said, describing the frightened dog owner in the snowy park where she walks Mack every morning.

Rescuers put plywood around the hole to stabilize the ground, and then widened the gap enough for a person to fit through.

Paveljack climbed down a ladder, uncertain of how the 100-pound animal would react to him after standing in 18 inches of cold water for an hour.

“He was intimidating. He was a big dog,” said the firefighter, who once owned a German shepherd. “If he was mad, he could have attacked me. But he was just scared. He knew he was in trouble and he wanted to get out of that hole as fast as possible.”

The plan was for Paveljack to lift the dog and bring him up the ladder, but the firefighter found himself sinking in mud under the weight of the squirming, wet dog.

“I had water rolling over the top of my boots,” he said.

The firefighters up top lowered down the dog’s leash and rope for a makeshift harness and hoisted the dog up while Paveljack followed up the ladder, pushing from below.

“It was beautiful thing,” a grateful Moore told The Buffalo News. “He was wagging his tail, looking at all the people.”

Moore, who couldn’t be reached by phone Monday, told the newspaper that her leg had sunk into the hole but that she caught herself and crawled to safety. Her dog, she said, had run up from behind and toppled in.

Mack, she said, initially appeared to suffer only from a sore hip but on Monday was moving slowly and was ill. She planned to take him to a vet.

Authorities in Rochester say the motion-activated singing fish apparently scared off an intruder who tried to break into the Hooked on Fishing bait and tackle shop.

The novelty bass had been hung near the door and would start singing whenever someone entered the shop.

The Olmsted County Sheriff’s Office says the fish was found on the floor after the intruder knocked it down while breaking the door to get in late Sunday or early Monday.

Sgt. Tom Claymon tells the Star Tribune the would-be burglar left without stealing anything, including cash that had been left in “a very visible spot.”