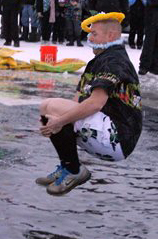 ANCHORAGE, Alaska (AP) – More than a thousand people in Alaska took part in a polar plunge.

The fundraiser for Special Olympics Alaska took place on Saturday at Goose Lake in Anchorage. Ice was cut from a large portion of the lake to allow the plungers room to do their favorite dive, such as a cannonball. More timid plungers stepped into the frigid water, and others got a helping hand from fellow jumpers.

“It’s cold,” said David Aromin, a recent transplant from Philadelphia who took part with others from LifeMed Alaska, an air ambulance service.

“It’s for a great cause,” he said, explaining why he’d spent his morning jumping into 32-degree water.

Kat Bant of New York and Brittany Petrikos of Ohio said that despite the frigid conditions, the jump “was lots of fun.”

Much like Aromin, neither Bant nor Petrikos are from Alaska, and they yearn for signature experiences of the nation’s northernmost state.

“We’re not from here, so we wanted to do the Alaskan experience, and this is just a part of it,” Petrikos said.

The fundraiser brought in more than $300,000. It’s the eighth year of the event, and Special Olympics Alaska president Jim Balamaci has raised a total of over $2 million. “About 5,000 people have taken the plunge since the first event, and more than 50,000 people have donated,” he said.

“People with intellectual disabilities are sometimes the most underserved, and when you have a thousand athletes coming out on one of the shortest days of the year to jump into 32 degrees and say, ‘You know what? We’re going to unite our communities, we’re going to accept everybody, and we’re going to do this all together,’ it just warms my heart,” Balamaci said.

WILMINGTON, Del. (AP) – A Delaware city is spending more than $300,000 to evict thousands of goldfish and restore the pond they took over.

Sean Duffy is director of the water division for Wilmington’s Public Works Department. The News Journal quotes him as saying that when officials received a complaint from the pond’s neighbors and checked on the goldfish population, they realized they were “heading toward a catastrophe.”

Duffy says the city started draining the pond and removing fish and overgrown plants three weeks ago. He estimates they’ve relocated about 4,000 fish. He says officials don’t know what caused the infestation, but the city will stock the pond with native fish to head off a population explosion if goldfish are ever introduced again.

Ones, Zeroes Stolen Off Addresses on Homes Returned

PHILADELPHIA (AP) – Scores of ones and zeroes stolen from addresses mounted on the homes of Philadelphia residents have been returned.

Haley earlier released surveillance footage of a man and woman going around the neighborhood in September, ripping zeroes and ones off the front of homes.

She says she doesn’t know who returned the bag, which contained 56 ones and 27 zeroes.

But then, she and other neighbors don’t know why the numbers were taken — though they suspect that it may have been for some kind of art installation.