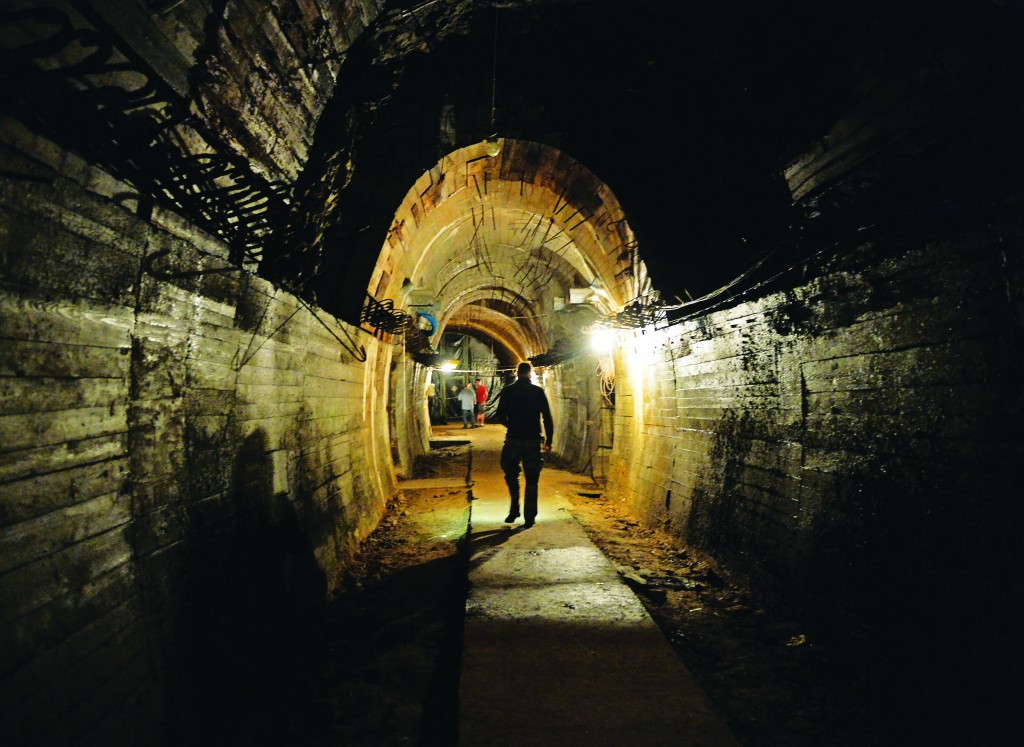 Gold fever has descended upon the southwestern Polish town of Walbrzych (Waldenburg), since authorities confirmed the potential discovery of a mysterious 150-meter-long armored train from the Nazi era in a 70-meter-deep lost tunnel on the railway line between Wroclaw (Breslau) and Walbrzych in Lower Silesia.

“There is a very high — more than 99 percent — probability that this train exists. … This is an absolutely unprecedented situation,” Poland’s deputy culture minister, Piotr Żuchowski, told a press conference on Friday. The old myth turned into a real story when two treasure hunters, a Pole and a German, claimed to have located the train along a 4-kilometer stretch of railway track through ground-penetrating radar that revealed, albeit blurred, the shape of a platform and cannons.

The exact location has not yet been disclosed, but the train is thought to be hidden between the 61st and 65th kilometer of the railway line where the Nazis built the largest underground project of the Third Reich, code-named “RIESE” (giant). Using slave labor from Auschwitz, some workers not older than 10 years, they built a complex tunnel labyrinth. This warren likely served as headquarters for government officials and production facilities for prototype weapons, sheltered from increasing Allied air raids. Using Nazi documents, 8,995 of the 13,000 prisoners involved in the project have been identified — all of them Jews.

Some laborers were left behind, most of them seriously ill with typhus, when the Soviet Red Army advanced in early 1945, but the valuable cargo stolen from Jews was loaded onto armored trains and shipped away to prevent it being seized by Allied forces. During the communist era, the Polish army searched in vain for the legendary “Gold Train”, and professional and amateur collectors alike have been trying to locate it ever since.

It should thus come as no surprise that wannabe treasure hunters and journalists from around the world have flocked to ­Walbrzych to be a part of history in the making. Polish media is reporting a tourist boom and representatives from the tourist industry can barely contain their excitement. Krzysztof Urbanski, manager of the impressive 400-room Ksiaz castle, under which the train is supposedly hidden, confirmed the city “is already reaping the benefits of a kind of Loch Ness Monster effect — no one’s seen the monster but that doesn’t stop it from attracting people.”

The process of searching for the train is expected to take weeks and police on Monday had to block off the area around the still-used railway tracks to prevent a collision between swarms of eager collectors and fast approaching trains. Provincial Governor Tomasz Smolarz warned that people walking down the tracks cannot escape “a train that emerges from behind the rocks at 70 kph” and strongly encouraged both locals and tourists to immediately stop searching, for their own safety.

Officials are also concerned that the train might be booby-trapped and army operations will begin on Friday to “verify security aspects linked with possible mines” and to help expedite the discovery. “We requested military assistance to establish if there’s any evidence behind claims that the train is buried here,” Walbrzych Mayor Roman Szelemej said on Thursday, taking into account the increasingly unsustainable status quo. “We can’t use city guards to protect an area of about 20,000 square meters indefinitely.”

It is impossible to tell what artifacts of the past Polish authorities will eventually discover, but “What exactly is on board the train?” is the million-dollar question on everyone’s mind. Some believe it is filled with tons of gold, gems and priceless paintings stolen from Polish Jews dispatched to concentration and forced labor camps. Others think it is more likely that authorities will find industrial material such as metals, weapons, bombs and ammunition. Still others speculate it carried secret Nazi documents and files of great value to historians. Some have even theorized the train contains the world-famous 18th-century Amber Room, looted from the Catherine Palace of Tsarskoye Selo near Saint Petersburg during the Second World War.

Robert Singer, executive director of the World Jewish Congress, found the speculations credible enough to issue a statement last week saying any valuables discovered must be returned to their rightful owners: “To the extent that any items now being discovered in Poland may have been stolen from Jews before they were sent to death, concentration or forced labor camps, it is essential that every measure is taken to return the property to its rightful owners or to their heirs.”

He added: “If no such survivors or heirs can be found, any gold or other property that is found to have belonged to Jewish families or businesses must now inure to the benefit of Polish Jewish survivors who unfortunately have never been adequately compensated by Poland for the unspeakable suffering they endured and their catastrophic economic losses in the Holocaust.”

Singer’s comments followed rumors that Russia and Poland were already sparring over ownership of the train.

In a statement released on Polish radio by the country’s deputy culture minister, Poland declared that, under the accords passed with Germany in the aftermath of the Second World War, it is clear, “If the train is found, it will be owned by the State Treasury.” The Polish daily tabloid Super Express caused a furor with an article headlined: “Russians and Jews reach out their hands for the treasure!”

Moreover, the Polish and German treasure hunters are seeking a financial reward for their discovery. Acting through lawyers, the two men offered concrete instructions to local authorities in exchange for a 10-percent cut of the loot if their information proves to be legitimate. No official promises have yet been made, but some have already called into question the moral implications of such a deal. Speculation is now rife that the man who revealed the location of the train was a former SS guard, although little is known about the original source behind the tip and officials decline to comment further about his identity. In other words, by agreeing to such an arrangement, the Polish Treasury runs the risk of letting people enrich themselves with Jewish valuables based on the information of an ex-Nazi.

Amid all the ownership claims and Loch Ness-style hype it should not be forgotten that what we are witnessing here is not a fantasy adventure, but the potential discovery of relics of the most shameful and hideous crime in the entire human history, which forever left a scar on the conscience of the world. If there is Nazi gold on the train, it will almost certainly include gold pulled from the teeth of Jews in extermination camps. Every week, Treblinka — a concentration camp northeast of Warsaw — produced two suitcases of gold extracted from the teeth of Jewish prisoners, each weighing between eight and 10 kilograms.

It is perfectly understandable that the different parties involved feel strongly about the discovery. But with ownership must come responsibility and it is the responsibility of the Polish authorities to make sure that whatever they may find is not being exploited and used in such a way that it perverts the dignity and memory of those from whom the cargo was unlawfully taken — the Jewish men, women and children who lost their lives in Nazi concentration camps and in the deep, dark RIESE labyrinth.