Columns Nutrition Before You Munch, Know What’s Behind That Satisfying Crunch
Nutrition 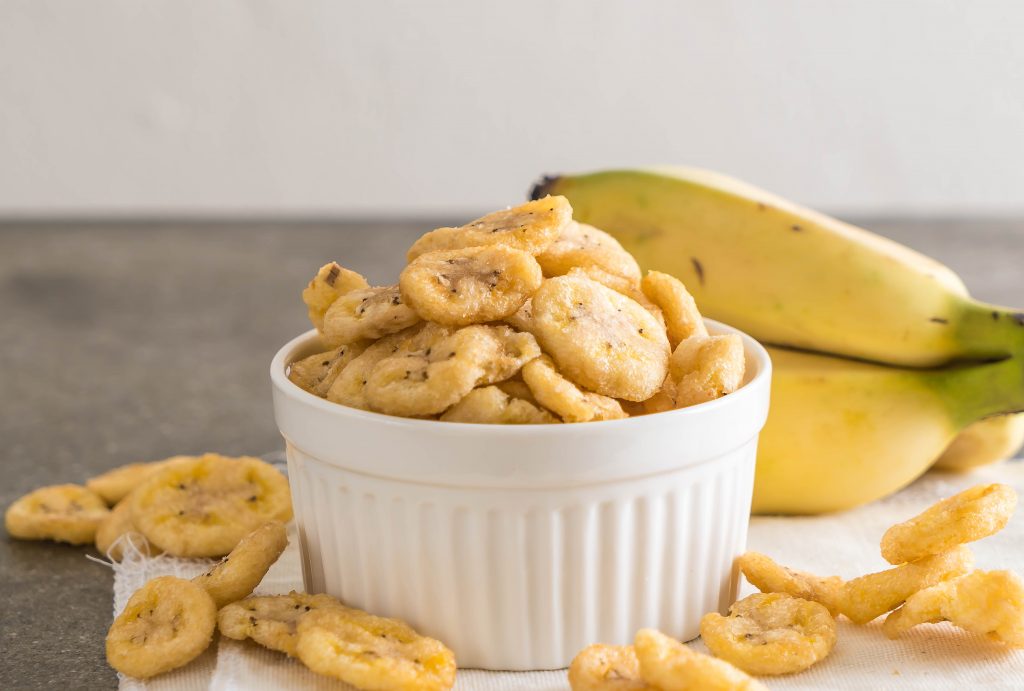 If you are looking for a good excuse to eat a pile of chips, store shelves are brimming with them. It seems nearly everything in the produce aisle — whether it’s kale, snap peas, apples or bananas — now comes crisped, seasoned and packaged. Manufacturers seem to be hoping that Americans — approximately 90 percent of whom don’t get the recommended daily amount of fruits and vegetables (not including fried potatoes) — will turn to crunchy snack items to help fill the nutrient gap. But are these new, crispy versions of fruits and vegetables any better for you than fried potatoes or regular chips? Does a portion of baked kale chips count as a serving of vegetables? It might, but there are a few things to consider.

Gauging from the many recipes making the rounds (which I have yet to try), many leafy greens and root vegetables such as carrots, beets and, of course, potatoes, are easily “chip-ified.”

I have also long enjoyed making fruit crisps by slicing apples or pears very thinly and baking them just like that, or maybe with a sprinkle of cinnamon, until they’re crunchy; and I count those as eating fruit just as I would other dried fruit. Granted, the baking process compromises some of the produce’s inherent healthfulness — particularly stripping it of vitamin C, which is especially heat sensitive, and some antioxidants — but nutrients such as minerals, fiber, protein and vitamin A are retained, because they are fairly stable in the dry heat of the oven. Also, the crisping of produce is essentially dehydrating it — which can be a nutritional downside — given that the water in fruits and vegetables is valuable for increasing satiety, slowing down consumption, and contributing to the body’s hydration.

Dehydrating fruit also concentrates its inherent sugars, making it more calorically dense. But if my daughter, her friends and I are having that much fun eating kale and apples, it seems worth the trade-off, especially if the chips are replacing other, less-healthy snacks.

Many of the packaged vegetable and fruit chips sold today are pretty much the same deal: whole vegetables and fruit, with perhaps some oil, salt and seasonings added, which are baked or otherwise dehydrated until crisp.

Take the insanely popular snap-pea crisp, for example. The brands I found are made with snap peas, salt and oil, and have essentially the same basic nutritional profile (except for less vitamin C) as if you sautéed fresh snap peas in a little oil with a pinch of salt. The only problem is that it’s easy to keep popping the crisps in your mouth and mindlessly overeat them — getting too much oil and sodium in the process — in a way that isn’t an issue with raw or simply cooked fresh vegetables.

The same goes for packaged fruit chips. It’s easy to find brands that have one simple ingredient — say, apples — and they are a delicious and healthy snack. But unlike when you make them at home — which gives you a built-in stopping point because you can only make them in relatively small batches — buying them by the bag could easily lead to mindlessly downing several apples’ worth in one sitting.

Although these options are more healthful than many packaged snacks, other products are really just regular chips in a kale coating. At the worst end of the spectrum, I found a product sold simply as “kale chips,” which you might pick up thinking you are getting a real green vegetable. But their ingredient list revealed that they were mostly made of potato starch and potato flour, and contained kale powder. They lack the fiber, iron and vitamin A of chips made mainly of whole kale; and they have nearly twice the sodium of regular potato chips.

Many other “vegetable” chips have the same profile — mostly potato flour and starch with a sprinkling of some colorful vegetable or another giving it a misleading health halo. Often they are baked, but sometimes they are fried, in which case you may as well eat regular potato chips made from less-processed whole potatoes. The bottom line is that no matter how healthy sounding the name of the product may be, turn the bag over and read the ingredient list so you really know what you are getting. And don’t count it as a vegetable or fruit unless it primarily is one, in minimally processed form.

While you’re at it, check out the sodium content — a reasonable upper limit is 170 mg per ounce serving — and be aware of the stated serving size, too. Many varieties I have tried are heavily seasoned and salty (I have yet to find a store-bought kale chip that isn’t overly seasoned for my taste), and you might be surprised at how few chips are in a serving.

So count baked chips as a fruit or vegetable — certainly if you make them at home, and maybe if they’re from the store, depending on the kind you buy. Either way, they are best eaten on occasion as a healthier snack option in addition to — not instead of — fresh fruits and vegetables.