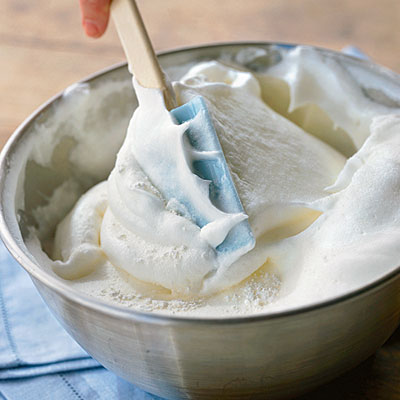 At The Peppermill we often get phone calls asking us to explain culinary terms found in cookbooks that are not as simple as the generic word “mix.” Some of these words are necessary to denote slight differences in the way a recipe is prepared, but some are just used for variety and are interchangeable.

We’ve put together a list of terms you might come across and we’ll explain the differences between them. All of the following words are related to “mixing” and will give you a better understanding of why certain steps are important to proper recipe technique.

Batter – a thin mixture consisting of flour, liquid and leaveners that can be poured or spread. Pourable batters are most often used for chiffon cakes, bundt cakes and pancakes. Pound cake batters are usually thicker and need to be spread in the pan with a spatula.

Beat – to mix ingredients rapidly until they are well combined, usually with eggs or cream.

Cream – to beat an ingredient, usually a fat like butter or margarine, until well softened and combined with sugar.

Dough – a mixture of flour, liquid and a leavening agent such as yeast or eggs, that is combined to form a mixture that is stiff but still pliable. Dough is either rolled out using a rolling pin or formed by hand.

Emulsion – a mixture of two or more liquids that don’t combine easily, like oil and vinegar. Emulsions can be made with a hand-held whisk, an electric blender or food processor. The most common emulsions are salad dressing vinaigrettes.

Fold – to incorporate a light, fluffy food item such as egg whites or whipped cream, into a heavier mixture. Folding is done by lifting the fluffy food from the bottom of the bowl and literally “folding” it over the batter at the top of the bowl. The act of folding prevents the delicate structure of the egg whites from being crushed by strong strokes. It’s a good idea to use a silicone spatula or spoonula to fold batter. Never use an electric mixer — even at low speeds as the strength of the mixer will flatten the egg whites. Folding is a technique used when preparing mousse, chiffon or sponge cakes and meringues.

Knead– to mix workable dough with your hands, a mixer or food processor in order to develop gluten, the proteins that make dough elastic. The longer a dough is kneaded, the more gluten it develops, a feature that is desired when baking bread. However, when preparing pie dough, the less you knead the better. Too much gluten will cause the dough to shrink unattractively in your pie plate.

Sift – to pour flour or other dry ingredients through a sifter, a tool with a mesh bottom used to remove lumps and impurities from dry ingredients. Large sifters are useful for flour when baking in large quantities, while smaller sifters are used for a sprinkle of confectioners’ sugar which tends to be lumpy. When adding dry ingredients, many recipes suggest sifting together flour, baking powder, baking soda and salt. This makes the ingredients light and airy, as well as preventing lumps from forming in the batter.

Toss – to quickly mix ingredients such as vegetables for a salad. Tossing is most often done with a fork or spoon.

Whip – beat rapidly, by hand or with an electric mixer to incorporate air and increase volume. This term is most often used in conjunction with egg whites or cream.

Whisk—used as a noun or verb, the term whisk can refer to a tool used to combine ingredients by hand or to the act of combining the ingredients by using a whisk. A whisk is a tool that consists of looped wires attached to a long handle that break up lumps when used to stir ingredients.