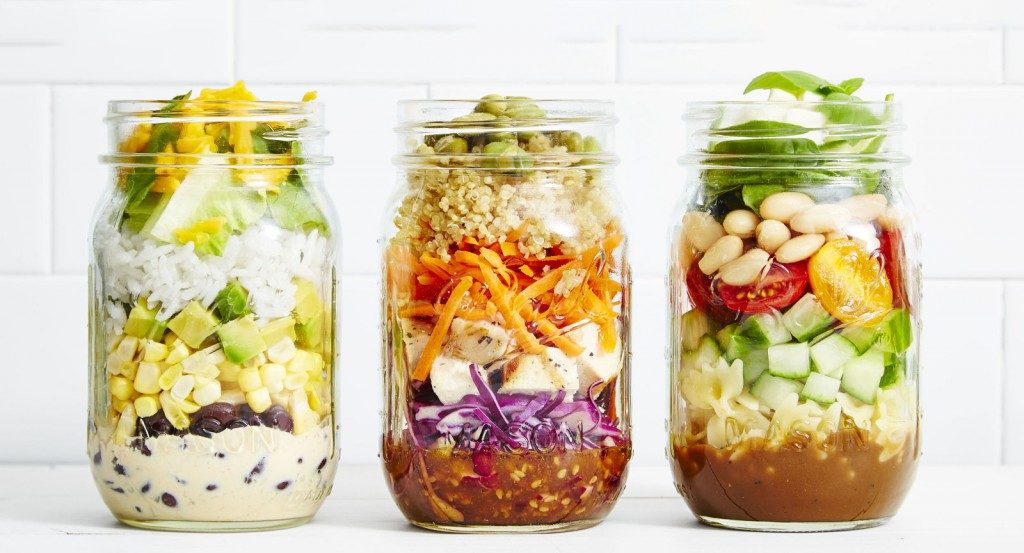 Because it commemorates an ingenious invention that’s been making life easier for homemakers since 1858. A mason jar is a molded glass jar used in home canning to preserve food. The jar’s mouth has a screw thread on its outer perimeter to accept a metal ring band. The band, when screwed down, presses a separate stamped disc-shaped lid against the jar’s rim. A rubber ring on the underside of the lid creates a vacuum seal, ensuring food stays fresh. Previously, preserving food had been iffy and often did not work well.

While tin cans and modern amenities like refrigerators have ended the heyday of home canners, mason jars have recently regained lots of popularity as containers for serving drinks, desserts and even salads.

Salads in jars are great because you can take them to work or on a picnic. The dressing goes into the jar first so the salad components don’t get soggy.

Here’s how to do it:

Mix all ingredients and place on the bottom of the jar.

Next, layer in some protein:

Add a grain or pasta — bowties, quinoa, brown rice. How healthy you want it to be depends only on you!

Last go the greens. Top the salad with shredded romaine lettuce, baby spinach leaves or a generous serving of sprouts. Screw on the top of the jar and stand it upright.

Three hours later it’s lunchtime. Shake the jar vigorously and enjoy, or turn out the whole salad into a bowl.

For the raspberry vinaigrette:

Make the dressing: Whisk together the vinegar, raspberry jam, salt, and pepper. Slowly add the olive oil, whisking, until the dressing thickens.

Place 3 tablespoons on the bottom of a jar. Reserve the rest of the dressing for another time.

Place the pear slices in the bottom of the Mason jar. Add the pomegranate seeds, and the chopped pecans. Layer in the spinach and top it with the crumbled cheese.

Spinach and Orzo Salad in a Jar

1 pint cherry tomatoes, cut in half

Cook the orzo according to package directions. Drain and let cool.

Whisk together the oil, lemon zest, lemon juice, herbs, salt and pepper in a medium bowl. Divide the dressing among the 4 jars.

After the dressing, layer the salad ingredients into each jar in order: about 1/2 cup cherry tomatoes; then 1/4 cup cooked orzo; 1/4 cup snap peas; 2 oz mozzarella; and last, about 1-1/4 oz of baby spinach leaves. Screw the lids onto the jars tightly and refrigerate immediately.

When you’re ready to eat, unscrew the lid and shake the salad out into a bowl.

Correction:
The correct amount of cream cheese for the filling of last week’s Pecan Cheesecake recipe is 32 ounces (not 2 ounces). Hamodia apologizes for the typo.