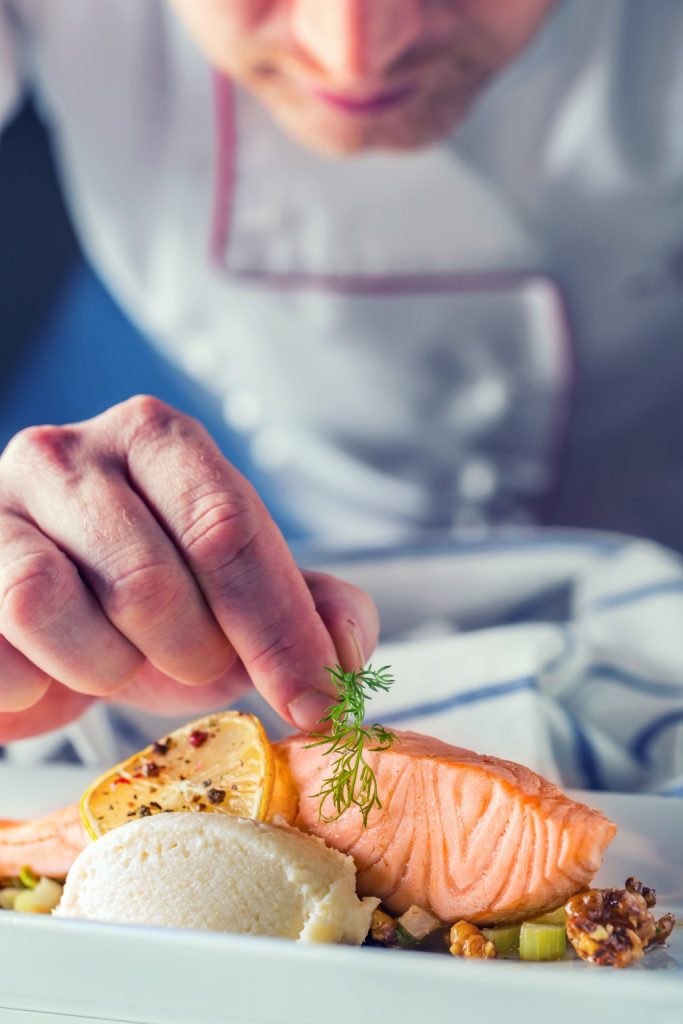 There is only one reason to not adopt it: Food just doesn’t taste as good.

In my mind, those two considerations are of equal importance. So I set out to cook a few dishes that are low in sodium but still taste great. Corned beef did not play a part in any of them.

The trick to cooking with little sodium is to use strong flavors that aren’t salt to excite and stimulate your taste buds. Acids work particularly well, such as lemon juice or vinegar, and so do hearty herbs and the sharper-tasting spices.

I used these ideas to create entrées without using any salt at all, and each was better than the last.

Okay, the salmon actually could use a little salt on it, and that’s fine. Everyone needs sodium to survive, even people on low-sodium diets. The sauce on the salmon is flavorful enough that it only needs a minimal amount of added salt. You’ll be fine.

It occurred to me that the best way to perk up a dish without using salt would be to serve it with a gastrique. In all modesty, I’d have to say that was brilliant.

A gastrique is a reduction of vinegar and sugar or honey that turns into a sweet-and-sour syrup. You can pump it up with fruit if you want, but I made an exquisitely simple version: nothing more than honey and cider vinegar that, when reduced, brings out the apple flavor of the cider vinegar.

I also cooked simply, with slices of apple (to play off the tart apple taste of the gastrique) and onion.

Next up was lemon chicken, a dish I often make using salt. Typically, I marinate the chicken for an hour or so in a lemon-based marinade and then I grill it. Less frequently, I bake it.

But I wanted to make my salt-free chicken on the stove top, so I decided to braise it. It’s one of my favorite ways to cook chicken.

All you have to do is sear the chicken on both sides in olive oil infused with garlic and thyme or rosemary. I usually pour off the fat, which can be considerable, and then add enough liquid to come up about 1 inch in the pan.

Usually, I use chicken stock, but that has salt in it. So I added water, along with the juice of two lemons. Then I covered the pan, simmered it until it was done and used a cornstarch slurry to turn the braising liquid into a zippy, salt-free gravy.

That brought me to the salmon. I decided to poach it as a way of imbuing it with plenty of low-sodium flavor. My poaching liquid was full of goodness: carrot, onion, celery, the juice of a lemon and that lemon’s peel. The fish only took a few minutes to cook.

What made the salmon such a low-sodium treat was the sauce I served it with, a kind of simplified tzatziki. I started with plain Greek yogurt (less sodium than regular yogurt) and stirred in some lemon juice, chopped cucumber and salmon’s favorite herb, dill.

And maybe it needed just a little bit of salt.

Juice and peel of 1 lemon, plus 2 wedges of lemon