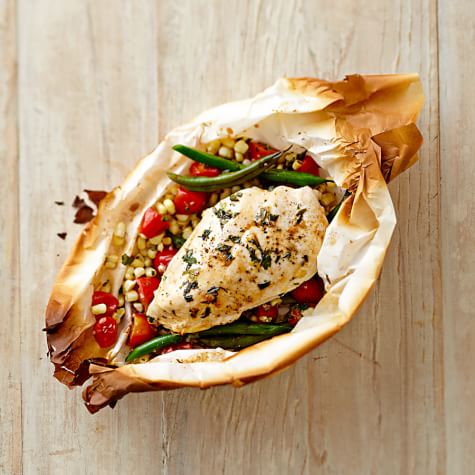 In a bowl, mix together the onion, zucchini, carrot and garlic. Add half the oil and toss to combine seasoning with salt and pepper to taste. Put each fish fillet in a piece of parchment paper as directed above. Sprinkle with salt and pepper, to taste. Arrange the vegetables on top, dividing evenly. Top the vegetables with 2 lemon slices, remaining oil and 1 tablespoon white wine, layering in order. Fold the parchment paper as directed. Arrange the packets on a baking sheet. Bake until the fish is cooked through, about 12 minutes, depending on the thickness of the fish. To serve, cut open the packets and serve on a plate directly in the parchment paper, so you don’t lose the juices.

In a bowl, toss together the corn, tomatoes, green beans, shallots, olive oil and half of the parsley; and season with salt and pepper.

Prepare 2 sheets of parchment, as directed above. Preheat oven to 400 degrees.

Place half of the vegetable mixture in the center of each sheet; and top each with a chicken breast. Season the chicken with salt and pepper, sprinkle with the garlic and remaining parsley and drizzle with oil.

Fold and seal parchment as directed and place each packet on a baking tray.

Bake until the chicken is cooked through and the vegetables are tender, 12 to 15 minutes. Transfer the packets to individual plates and carefully open them. Serve the chicken and vegetables immediately.