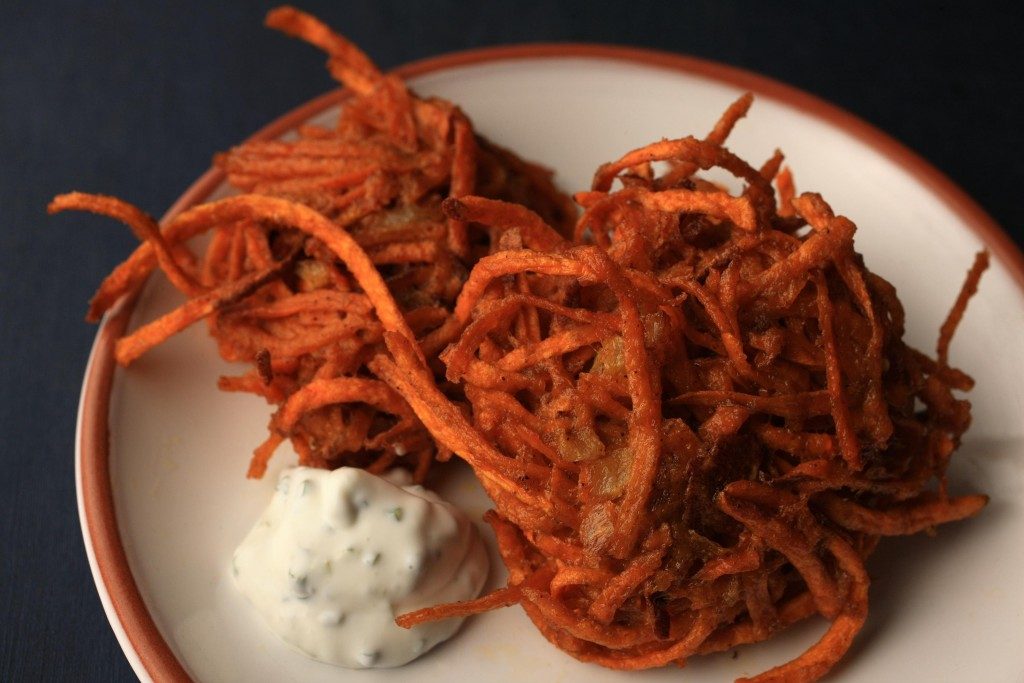 Of course you will be making traditional potato latkes at least once during the eight days of Chanukah! But when you want something a little different, you can try one of our twists on traditional, below

Beets and carrots give these latkes flavor as well as beautiful color. Serve 2–3 small latkes on a plate with sour cream in a small dish for a simple appetizer.

Using the grating attachment in a food processor, grate the potatoes, onions, carrot and beet separately.

Coat a small sauté pan with a little oil and put it over low heat. Add half of the grated onions and sauté them slowly until caramelized, soft and sweet.

Place all the rest of the vegetables in a colander and squeeze out as much liquid as possible. Add the eggs and flour. Season mixture to taste with salt and pepper.

Add half a cup of oil to a medium skillet and heat it to 370° F. Use a heaping tablespoon of the latke mixture for each latke. Place 3–4 tablespoons into the oil and cook until brown on 1 side, approximately 2 minutes. Using a spatula, flip the latkes and continue to cook until brown on the other side. Remove from oil to a paper towel-lined platter. Continue with the remaining mixture. Arrange the latkes on a serving platter and serve immediately.

These require less attention than latkes frying in a pan.

Preheat the oven to 450° F. Mist a baking sheet with cooking spray.

Peel the potatoes and then grate on the large holes of a box grater. Transfer to a fine-mesh strainer and squeeze out as much liquid as possible into a bowl. Let the liquid settle for about 10 minutes, and then pour off the watery liquid, reserving the potato starch.

Beat the egg white in a large bowl until it holds a soft peak. Gently fold in the potatoes, scallions, reserved potato starch, 1/2 teaspoon salt and 1/4 teaspoon pepper.

Drop the mixture by tablespoons on the prepared baking sheet, spacing the latkes about 2 inches apart. Gently spread and flatten into 2 1/2-inch rounds. Roast until the bottoms are browned, 8 to 10 minutes. Flip and roast until the potatoes are cooked through and the bottoms are spotted brown, 4 to 6 minutes.

Grate the onion on a box grater into a large bowl. Grate both potatoes into the same bowl, grating down the length of the potato to get long strands. You can also use the shredder blade of your food processor. Toss the potatoes with the onions as you work to keep them from discoloring. Put potato mixture in a clean dish towel and wring out excess liquid. Toss the latke mixture with flour, salt and cayenne. Stir in the egg.

Heat a half-inch of oil in a large heavy skillet over medium heat. Working in batches, spoon about 1/4 cup of the latke mixture into the skillet, pressing lightly to form 3-inch pancakes. Take care not to overcrowd the pan. Cook, turning once, until just golden, about 3 minutes per side.

Heat oven to 200° and keep latkes in the oven while you cook the remaining batter.